So, this is what people are calling the farting corpse movie. Ever since this premiered at Sundance this year, Swiss Army Man sounded like a really dumb movie since people either walked out of the screening or they stayed and loved it. But is it good? Well, Hank (Paul Dano) was shipwrecked and stranded on an island. Once he was about to hang himself, a dead body surfaced on shore. As he discovers this body, there’s a lot that Manny (Daniel Radcliffe) can do the equivalent to say a swiss army knife. He can do everything even farting uncontrollably.

This is directed by Daniel Kwan and Daniel Scheinert (Daniels), and their style of direction felt unexpectedly genuine and surprisingly kind for a story like this that’s also beautifully well shot. The bonding of both of these characters is so fascinating as both of them are helping each other find their way home. But along the way, it also gives us a lesson about how life ensures us as human beings. 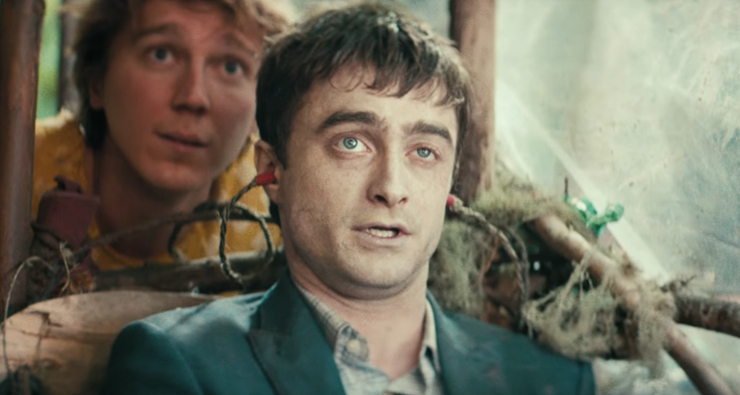 Like with Manny, he wants to know about life and love with Hank teaching him this he was forgotten. It explores how to communicate with people and what or what not to do in circumstances. Because sometimes we always want to talk to somebody we might be nervous trying to talk to and shows that this film explores what’s more important to us. We’ve all been there. This film goes for a deeper connection in ourselves whenever it’s brought up now.

There’s so much love between Paul Dano and Daniel Radcliffe. Their charming chemistry together worked so well. The interaction they have with each other was something else. Dano has given great performances before in films like There Will Be Blood and last year’s Love & Mercy, but in this, he really shines in a commercial role and he’s given good character development throughout. And this might be the best performance Daniel Radcliffe has given outside Harry Potter. Even though he’s a dead guy, there’s so much he can do besides releasing bodily fluids.

The humor was so on point especially having fart sounds be funny, to be honest along with both of the performances. The soundtrack was so eccentric and fun. The editing choices made really made this feel so alive. While it’s really good, the only problems personally were that the ending was something that needs thinking and sometimes while the writing is good, it could’ve been a bit more politically correct. But they addressed it so that’s alright.

To be fair, this isn’t a movie that’s going to be for everyone. With a movie like this, really know what you’re going in for. It’s such an original movie that hasn’t been portrayed onscreen that’s really different. Fantastic storytelling, terrific performances from Dano and Radcliffe, and an original movie that stands on its own.

Swiss Army Man is definitely a strange comedy. But it’s insightful, creative, and has something to say about life itself.