Nothing comes as a shocker when most movie sequels are basically the same thing, except making them bigger and better. With talking about Jumanji: The Next Level, the anticipation wasn’t exactly high with this unexpected sequel, but it’s easy to spot that there isn’t a ton of differences to be shown in this, even if this brings on new locations, characters, and body-switching taking place throughout.

What’s the Story: Three years after their adventure into the game, Spencer (Alex Wolff) makes the rash decision to jump back without the knowledge of Fridge (Ser’Darius Blain), Martha (Morgan Turner), and Bethany (Madison Iseman). As they returned to rescue him, they make it back to the world of Jumanji with avatars Dr. Smolder Bravestone (Dwayne Johnson), “Mouse” Finbar (Kevin Hart), Professor Shelly Oberson (Jack Black), and Ruby Roundhouse (Karen Gillan). But the game has a few glitches since Spencer’s grandfather Eddie (Danny DeVito) and his estranged friend Milo Walker (Danny Glover) are also sucked into the game. So, it’s up to them to complete this new and difficult adventure to find Spencer. 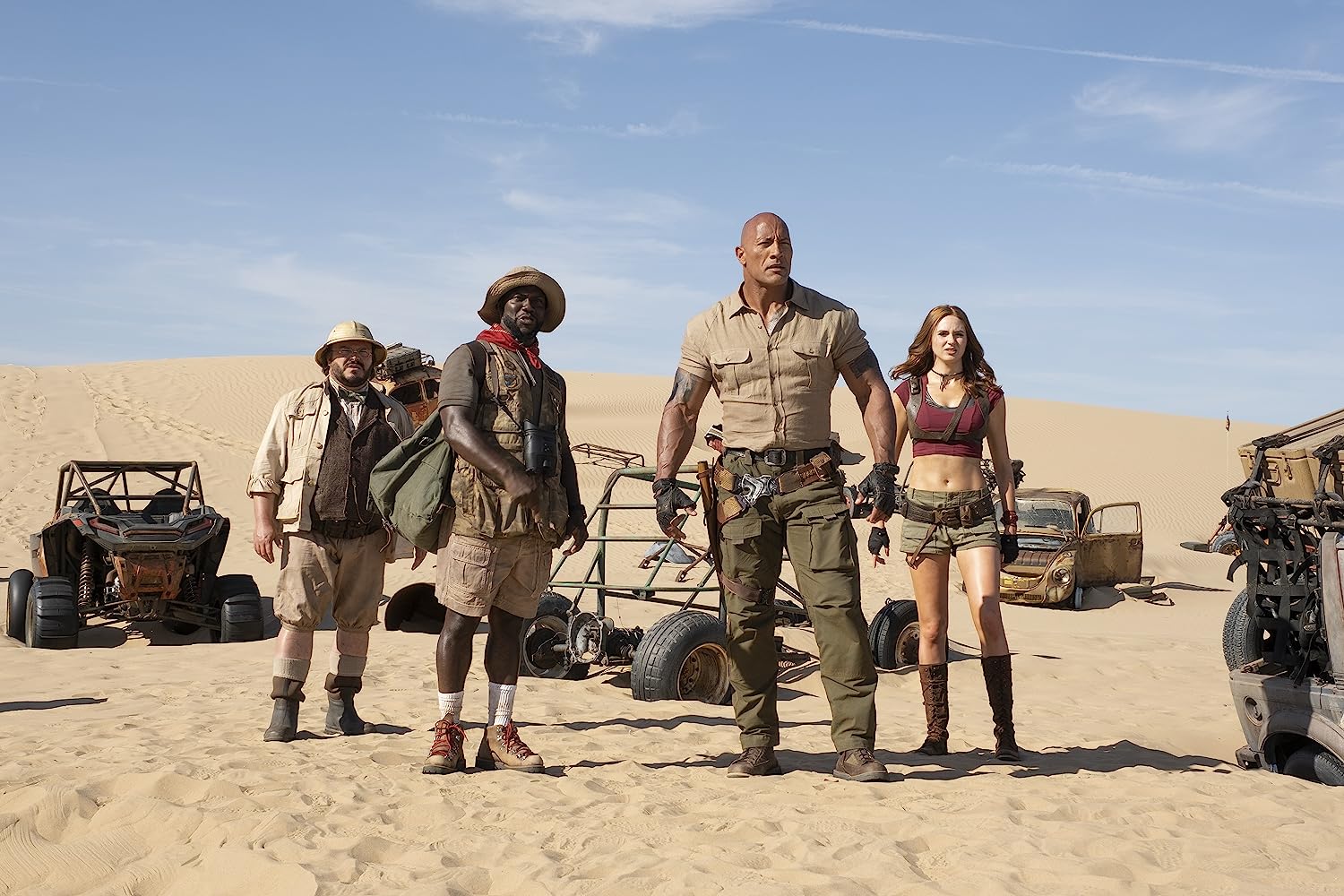 Look back two years ago, I was one of those people who thought a reboot/sequel to 1995 original was a terrible idea for anyone to jump on board with. That wasn’t the case with 2017’s Jumanji: Welcome to the Jungle since it turned to be a lot of fun, and it came as a shocker to me since I was never nostalgic about the original starring Robin Williams. Funny enough, it was a movie about a video game that was better than every video game adaptation out there. Considering that its predecessor almost made a billion dollars worldwide, coming out with a sequel with writer/director Jake Kasdan a few years later was the best idea they could come up with. Being the follow-up might be a tough job to handle when it doesn’t end be that memorable, but there’s some enjoyment to found.

Seeing the original cast back is never a letdown since all of them worked so well together and never looking like they wanted to be somewhere else that’s not filming this. Almost like the four of them were given a bit more to do in here than before. Props to Johnson, Hart, and my girl Gillan for still making these characters believable. But believe me when I say Black, once again, had me laughing the most out of everybody. Most of the funniest lines came from him when we know that Fridge in now in this avatar. When you watched the trailers and learn that Johnson and Hart are acting and talking like DeVito and Glover, respectively, it’s quite funny at first, but you can see it become a little tiring after a while.

But the relationship between DeVito and Glover never became dull even if they aren’t in their actual bodies. Another new addition to the series that was great was Awkwafina as a new character. I don’t wanna say what he’s doing in the game, but it was unexpected.

It brought the laughs as we expected it from it being a comedy, and it mostly succeeded. Some of those are thanks to the avatar switcheroo that brings a lot of moments of hilarity involved. Though I will say it wasn’t nearly as hilarious from before since that, not every joke landed or made me holding my stomach, especially when it reaches the third act of the story.

Most of the action sequences entertained that would be perfect to play through a video game, including a desert chase to away from a flock of ostriches (proving that they are scary) and this awesome sequence where the characters are trying to escape these mandrills by getting across revolving bridges.

Where I think this sequel isn’t better than Welcome to the Jungle comes from a few problems that came to mind while watching besides not enough big laughs, the story has a very similar structure that plays out a bit, just knowing the basics of how to get through the game without dying. There wasn’t too much originality. And just like Bobby Cannavale is the first movie, Game of Thrones‘ Rory McCann as the villain, Jurgen the Brutal, is nobody to care about. 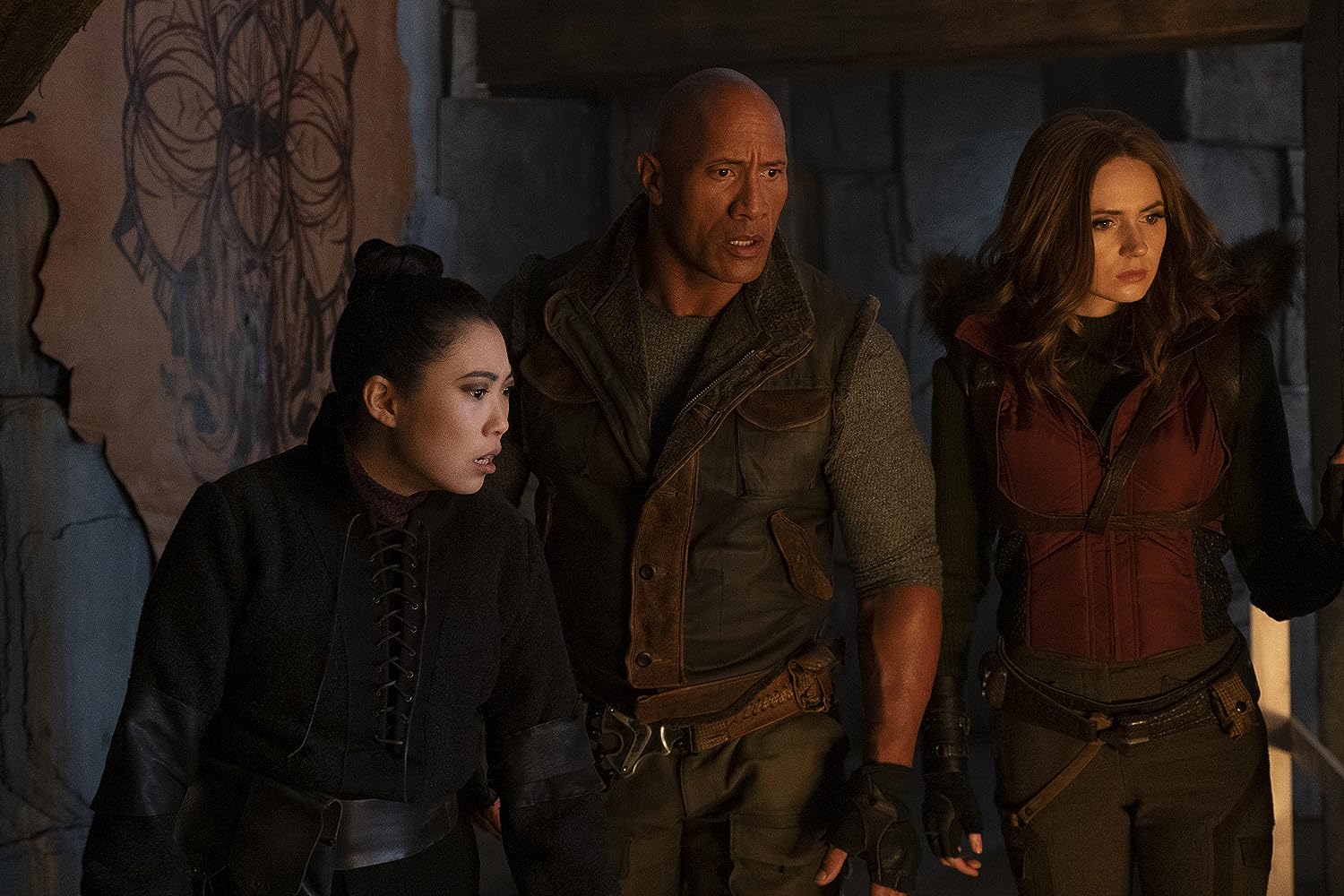 For a sequel that suffers as most do in not being better from before, that’s isn’t to say it should be considered that much of a disappointment. I just wished the returning writers (Kasdan, Jeff Pinkner and Scott Rosenberg) had something more amazing to throw into this and made it even more exciting. The aspects that played out before and repeated in here work for a little, but not enough to make it work fully.

Overall, Jumanji: The Next Level is a decent sequel that fans of the franchise will automatically enjoy. While it doesn’t surpass the previous when not all the jokes landed and it’s definitely similar, I thought it was still fun and everyone looked like they were having a blast filming. The best thing to say is that if you loved the last one, you’ll probably like this one too. Also, all I say is that it opens up a next installment that I’ll be willing to come back to.