It’s about time we have a shoot em’ up western that isn’t a massive disaster like The Lone Ranger. Luckily enough, The Magnificent Seven is a remake of the classic western, which is a remake of the Japanese film Seven Samurai. For a western to gain a new audience, it worked well enough and director Antoine Fuqua did a great job directing just showing how versatile he is as a director.

The story is basic by the numbers like it did with the other source materials that it’s based on or other classic westerns, but it just shows a lot of heroism throughout the film with this bundle of scoundrels protecting this town full of bandits. 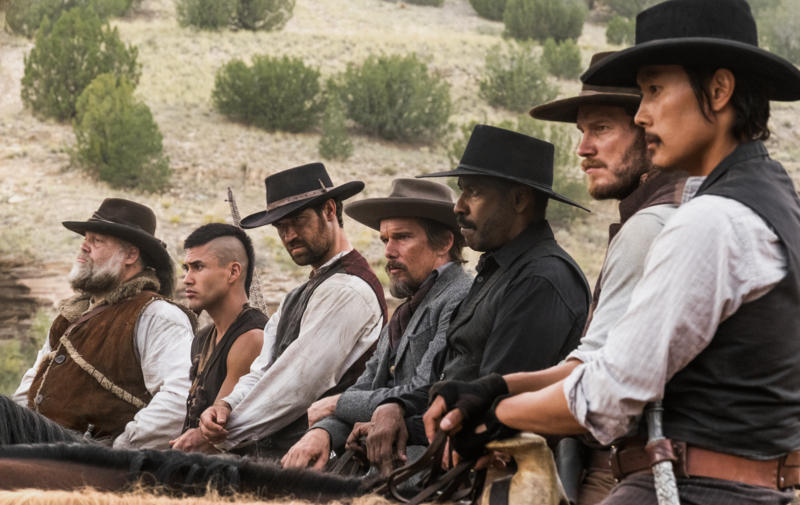 This cast is well realized. Honestly, what can you say negative about Denzel Washington? He’s so badass just bringing so much justice to his role. Chris Pratt is always likable. He was funny and there are moments where he turns into Star-Lord, but again, he’s just too awesome. Both Washington and he have good chemistry. Ethan Hawke was good and it’s great to see him and Washington together again since Training Day. And also Vincent D’Onofrio, Lee Byung-hun, Manuel Garcia-Rulfo and Martin Sensmeier were equally good as well.

Where it falters is that there wasn’t enough character development for some of them weren’t fleshed out enough getting to know them. The pacing during the first act but it picks up later on. And Peter Sarsgaard was kind of a weak antagonist. He wasn’t much of a threat or menacing.

Once the action gets going, it’s perfect. The shootouts were well directed without any shaky cameras and it clearly focuses on what’s happening on screen. The score by the late, great James Horner with the help of Simon Franglen is very good not to mention.

It takes shades of Tombstone, but not a lot of True Grit, but it’s a fun old school western to any fans. It’s one of Fuqua’s best in a while. This isn’t going to be the western to make a difference for any upcoming releases.

The Magnificent Seven offers up a well done western remake. Though not remarkable for the genre, it stills boasts enough great action.