Teen comedies have had their fair share of ups and downs in the past couple of decades. Many of which are somehow related to sex just like American Pie or Porky‘s. But back in 2007, here appears a comedy that changes the lives of many people and it’s called Superbad.

Seth (Jonah Hill) and Evan (Michael Cera) have been best friends since they were kids, and before graduating from high school, they want to reach that status of not becoming losers and want to get into a party. That might change when Seth’s crush, Jules (Emma Stone), is having a party and asked him to get booze for her party and Evan wants to hook up with his crush Becca (Martha MacIsaac). All the while, their other friend Fogell (Christopher Mintz-Plasse) gets a fake I.D. that eventually gets him to tag along with two irresponsible cops (Bill Hader and Seth Rogen). All of this together in one night makes for a great time. 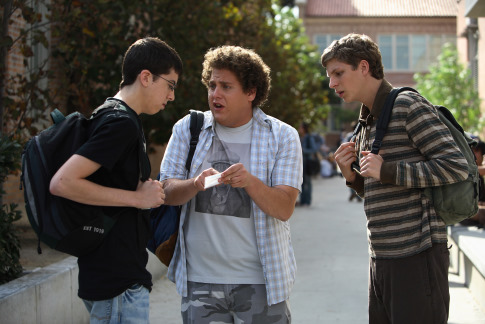 Whenever anyone asks me the question, “What are some of my favorite comedies?” I’ll give them straightforward answers. But the first one I always say is Superbad. Not only is this one of my favorite movies of all-time, this is my favorite comedy. This was the first R-rated movie I saw in theaters. I’ve seen R-rated movies before, but this was the first one seeing in the theater. After it was done, there was so much maturity that I’ve witnessed. This was around the time Judd Apatow was starting to really become a household name with comedies. So, since he produced this and coming off another great comedy Knocked Up, it would make sense for him to be a part of this project.

This is also considered to be a starting point for some of the stars in this. When this came out, this was a major role for Hill. Honestly, there’s nobody else that can speak these lines of dialogue of Seth other than Hill. A part of me doesn’t know if I would be friends with him in real life. In the end, it was a perfect casting choice. Cera was already a star on Fox’s Arrested Development, but 2007 was definitely his breakthrough year with this and Juno. Though he’s Michael Cera, he’s still great. The both of them as Seth and Evan have some of the best natural chemistry put on-screen. They have that bountiful bromance that honestly really worked. If I have to be relatable to either of them, it would definitely be Evan.

Everything should be given the credit to longtime buddies Rogen and Evan Goldberg, who wrote the script. They said that they started writing the script when they were teenagers and it’s kind of based on their own experiences. You can very much see their story come true in a way that it could be somewhat relatable. This has a narrative that stays on track and doesn’t stray from anything unimportant to drag the movie down. Because of how well-balanced this script is, it made their friendship realistic. Even when the dialogue can be considered vulgar and raunchy, it still retains that hilarity. While this came out five years before I started high school, this translates ahead of its time. There are moments of dialogue that are freakin’ hilarious that really struck a chord with me. Personally, this is one of the funniest screenplays ever written.

Director Greg Mottola, who later went on and direct Adventureland and Paul, really knew what he was doing at trying to keep the film at a consistent tone and never dips down into slow moments. He made this like the decade’s Dazed and Confused.

This also gave us one of the coolest characters in any comedy, Fogell a.k.a. McLovin. This was Mintz-Plasse’s first role ever. He’s very much the nerd that nobody would invite to a party. When this came out, he was still a minor which I couldn’t believe that. Because of this breakout role, he did get some good roles in the future such as Kick-Ass and Role Models. Plus, McLovin is the best name ever in a movie with a quotable line that’s pretty rad, “I am McLovin”.

Every beat of comedy thrown in here is on-point and doesn’t hold back. Basically, this is what R-rated movies used to be like back in the 2000s. Everything from Seth telling Evan that he used to draw pictures of d**ks to Seth fantasizing about getting the booze. The entire film is downright memorable. I think one of the times I laughed SO hard was when Seth got hit by the back of the car by Francis (Joe Lo Truglio).

Hader and Rogen as Officers Slater and Michaels are some of the coolest movie cops in pretty much anything. They’re very nonchalant at their job, and it’s cool to see cops want to have some fun. A part of me wants to see them in a spin-off of this movie. But that would basically be something like 21 Jump Street (another great movie featuring Hill). Always been a fan of both of them and they have dynamite chemistry. Any scene with them and McLovin are some of the best.

This also introduced me to future Oscar winner Emma Stone as Jules, Seth’s love interest. She does play the cute popular girl that anybody would fall for. In Seth’s case, it’s very understandable. Her performance is this was very cool, and it’s a great thing her career stayed on a positive light.

And because of this, this honestly introduced me to a little band called Van Halen. Never heard of them before I saw this movie. But I remember hearing their song Panama (favorite song from the band) being used in the marketing and they played it in the movie when Officers Slater and Michaels and McLovin drove around recklessly. The soundtrack, in general, is pretty solid.

In some ways, Superbad made an impact on me because this came out when I was starting fifth grade, and it made me want to be cool in school which didn’t happen because that year was a pain for me. This kind of layered the grounds for the standard teen sex comedies later on even though some don’t fall through and rely on crass humor that isn’t smart. Movies like Project X and 21 and Over failed to be smart and give us quality laughs by copying off this. Because of how great this script is handled, its genius from a comedy standpoint.

Superbad is a movie I truly adore ever since I first saw it. This might not be true, but if this wasn’t successful, Hollywood probably wouldn’t have some of the funniest comedies that came out in the past few years. Every teenager should have the chance to experience the hilarity that ensues this classic. It’s the type of film that nerds can very much enjoy on a daily basis. It’s one of those movies that kept me laughing when anything happens. Guess the moral of the story is friendship is power? That’s what I got out of this.

Compared to all the other high school movies, this is top 5 at the very best. After re-watching it for its 10th anniversary, it still holds up.

Superbad is everything an original teen comedy idolize with great chemistry between the leads, outrageous, classy humor, and a well-meaning script.