You know, it rare to check out indie movies in theaters nowadays. With these kinds of movies coming out, it might be a good sign since said film premiered at Sundance Film Festival. With little expectations walking into Brigsby Bear, hopefully, this will be something that more people be talking about in the near future. This should be a fact that I wish I could attend Sundance every year. Gives me a chance to check out potential Oscar contenders.

James Pope (Kyle Mooney) lives with his mother and father (Jane Adams and Mark Hamill)  in an underground bunker out in the desert. He’s never allowed to go outside because his parents tell him that the air is polluted. The one thing that keeps him company is watching his favorite show every day called “Brigsby Bear Adventures”. As it turns out, he’s the only viewer to ever watch this. It’s then discovered that they aren’t his real parents after all and he was kidnapped as a baby. He’s then returned to his real parents. When the series abruptly ends, James’ life changes forever as he sets out to finish the storyline himself. To do that, he must learn how to cope with the realities of a new world that he knows nothing about. 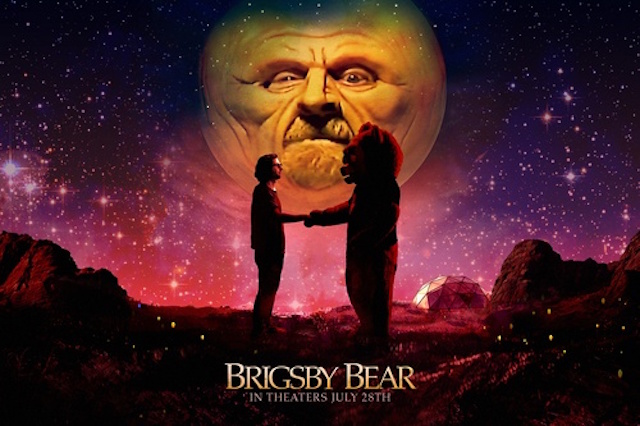 This had a little word of mouth after this came out in January. But when only seeing the trailer only once, I didn’t know what to expect. A part of me was just thinking this was going to be a pretentious movie that I won’t get. And by the end, it was impressive. Because you think the film is going one way but makes a sharp turn into something about as smart as it turned out. And the end result is a very different movie than what was expected. This felt like a lighthearted take on Room in a non-dramatic way. Brigsby Bear was a small surprise on a huge scale of satisfaction.

Fandom in the world today as spanned upon products and properties in entertainment. With the fictional “Brigsby Bear Adventures”, this was the one and only show James ever watched in his entire life. All he ever talks about is this very show. Sometimes, you never met that one person who loves a certain thing made for entertainment. For me, I consider Star Wars the great properties ever created, and it made me want other people to discover the same amount of love I share for that universe. Or anything else in particular. From this film’s perspective, it delves a sense of creativity and imagination to full effect.

Mooney is an ultimate talent in this. He also co-wrote this script with Kevin Costello. Some people can honestly connect with James. His character is very closed off and has a difficult time connecting with other people because he never had real interactions with anybody else. He’s sometimes one of the few bright spots on Saturday Night Live and I didn’t know how he will do in a leading role. This should be a performance that shouldn’t be overlooked as this is a breakout role in this.

Not knowing anything about director David McCary, he definitely directs Brigsby Bear with a sense of passion put in this. Proving that with Mooney and Costello’s screenplay makes for a good, enjoyable time experiencing this. Because of how original this is, it’s all about getting into our idea we must pursue in life and express our love to everyone else who might not be on the same page.

The film also has a good supporting cast here that includes Greg Kinnear as the detective who has a thing for acting and Michaela Watkins and Matt Walsh as James’ real mom and dad who want to help him adjust to a normal life. All of them put in grounded performances as some of the people who are trying to help out James.

This show that he’s so obsessed with is fascinating. It’s such a weird and cheesy kids’ show to watch with a talking teddy bear on odd adventures and an important lesson be learned in the end. The show itself is like that failed live-action Teddy Ruxpin series but in a special kind of way. If I was little and this actually existed, this would actually be a lot better than Barney. Since this is the only show he watched, James has a collection of toys, VHS tapes, and books all over the subject.

This wasn’t a laugh-out-loud comedy, which was what I expected. But the humor that’s provided in this is off-beat to the point where it can be considered awkward in a good way.

As for issues, most of the jokes didn’t hit me but I think it’s because of its humor it was gunning for. And I really thought Hamill was going to be in this a lot more than I thought he would be. Though not a lot of screen time, I enjoyed his presence.

It’s one of those small films that doesn’t dumb itself down in complete ridiculousness. Nothing made me bored and it’s paced pretty well. But in the end, it became a heartwarming story about either growing up or setting upon what you love and accomplishing that goal. This did feel like a strange cross between Room and Be Kind Rewind. Not in thing is screaming Oscar contender, but it’s a great thing that it’s coming out now. Very original movie to come out in a while. To quote James, “Dope as sh*t.”

Brigsby Bear is such a highly original off-beat comedy focusing on true fandom in an unexpected and touching way.