When you’re a teenager, you always had fond memories of watching the wave of teen comedies that are outside the realm of the John Hughes flicks when it involves the typical sexual interplays, feeling like being a mature human being has been explored for most of the runtime. Though even though the movie is called American Pie, this isn’t about the iconic Don McLean song about how the day music died; it’s a sex comedy where it features an American having sex with an apple pie. 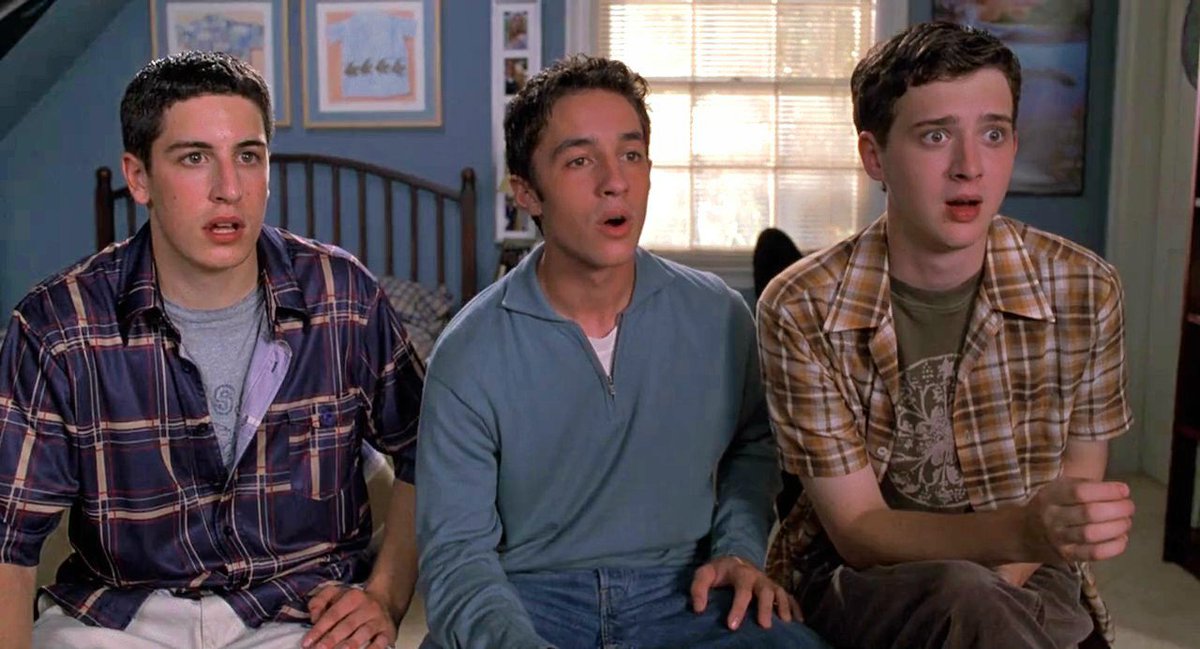 1999’s American Pie is a movie I remember watching when I was pretty young for the first time was probably on television, along with the sequel, maybe on the USA Network. But I’ve always remembered this was one of the most talked-about teen movies to come out that wasn’t called Porky’s or Revenge of the Nerds. Lucky for this, this was a way better time to spend than Porky’s. But if you were part of the teenage demographic and couldn’t buy yourself a ticket without parent supervision, the easiest thing to do is to pay for another movie and sneak into the other without getting caught.  Haven’t we all? Still, it made $102 million in the top 20 films in the domestic box office. But when you’re talking about a movie like American Pie, you either think it’s one of the funniest teen comedies of the all-time or has nothing redeemable about itself. Thankfully, I consider this a quintessential coming-of-age comedy that’s always a good time to watch.

When I was watching this, and I haven’t checked this out in eight years, I can now see how this is the type of high school movie that’s easy to relate to when looking through an adult’s perspective. Because whenever you’re spending the four years of that point in our lives, it’s very common that sex is always on nearly everybody’s mind, whether it’s around dating or getting it out of the way before heading off to college, not feeling left out of the blue like everyone else. Directed by brothers Paul and Chris Weitz in the directorial debut from the first screenplay by Adam Herz, this turns out to be a memorable and breezy movie where it might be realistic enough for those who have experienced something like what the characters have gone through. This wasn’t what I’ve gone through, by the way. I wouldn’t have known this was the first feature from two brothers since they worked well with these actors who might’ve been in other things before. 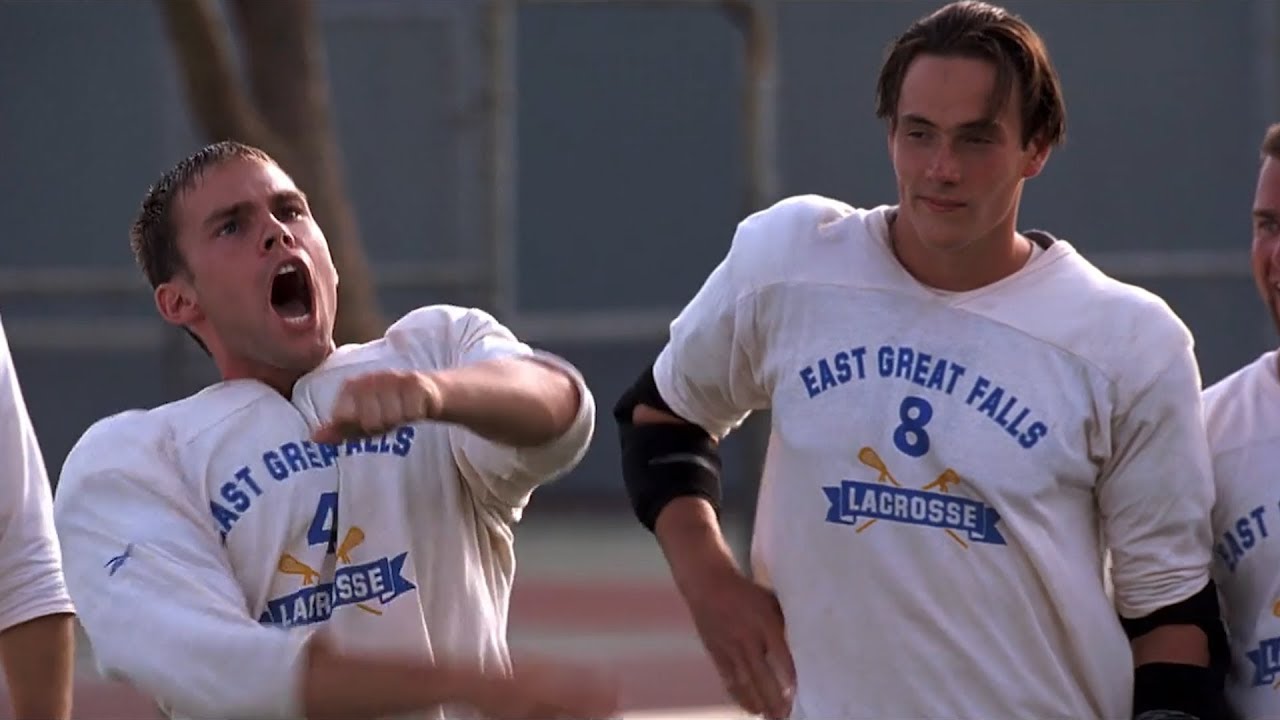 We’re just watching these guys get through this pact having no embarrassing situations happen to them, which it does, but the best thing about American Pie is going along with the journey with each of them seeing no one failing. I like how it’s showing that high school life can be fun while feeling as if you’re seeing things in a way that’s easy to be attached to. Whether it’s trying to be more sensitive or almost scoring a beautiful foreign exchange student Nada (Shannon Elizabeth) in your own bedroom (where the whole school is watching), all these guys want some kind of success. As I grew older, I know there are more important things in life other than losing your virginity, but it didn’t matter too much when there’s enjoyment to be had sitting through this.

But to make this story work, you must need pleasant characters with fresh perspectives through the end, focusing on the one goal to have. You know, it’s hard to believe some of them were really up-and-coming actors when this came out. Honestly, if you don’t like any of the main characters, there’s nothing to do but to shame you. I loved the friendship between the four of them, and not once did it feel fake when they’re having any typical conversations with each other to the point of really wanting to hang out, feeling part of the group. Everybody does a terrific job from Biggs, Klein, Nicholas, and Thomas, respectively, and you never felt annoyed by them since they appeared very likable people. As much as I’m not a big fan of Biggs, he completely nails it as Jim to where you only see him as this character in every other movie afterward.

Seann William Scott was a genuine breakout star here as Stifler, which is the role that made him a star and turned into one of the most iconic A-holes in any movies from the decade, and this has become the most recognizable character he has played with his involvement in the series. This was definitely more of a supporting role, which was fine by me when he could’ve been totally obnoxious. To be honest, I’ve always liked Scott, but if Stifler was an actual person we all knew in high school, should we consider him a friend? Not to me. 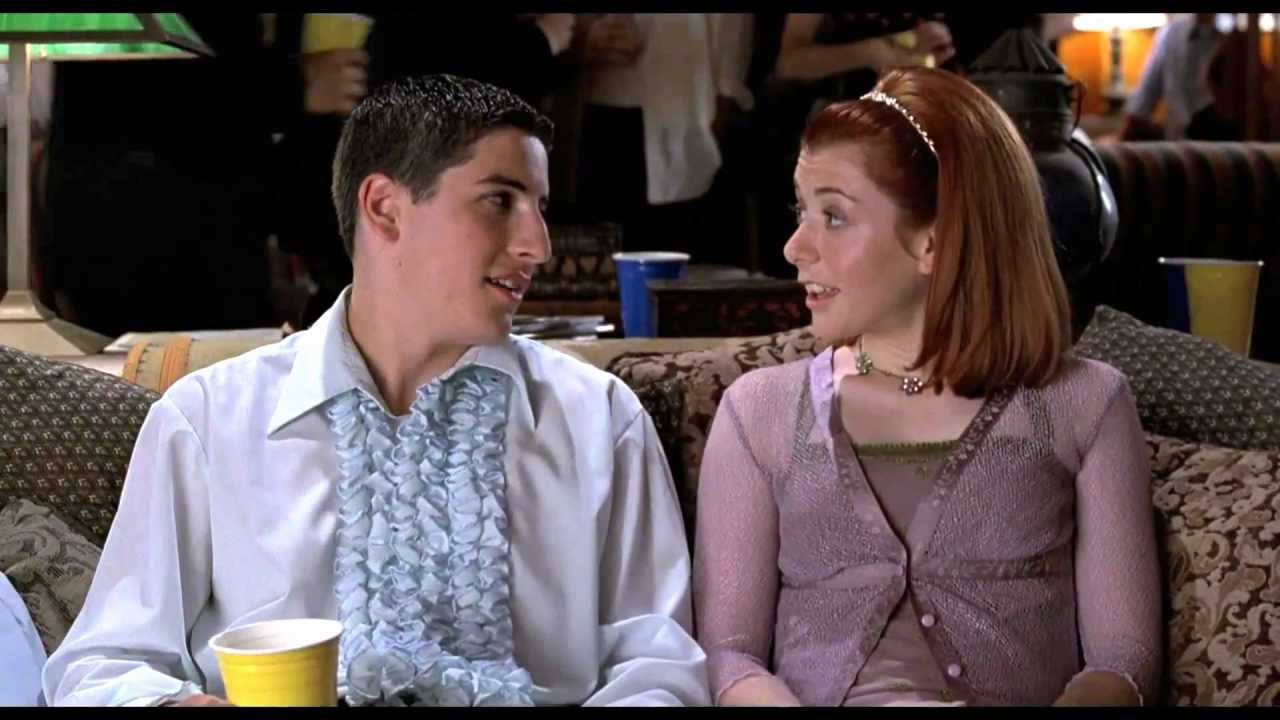 Then you also have the female performances to play opposite the male characters who I thought were surprisingly well-written, including Tara Reid as Vicky, Mena Suvari as Heather, Alyson Hannigan as band camp geek Michelle, and Natasha Lyonne as Vicky’s friend Jessica. If I had to pick the standout out of the bunch, Suvari, who also starred in American Beauty the same year, was my favorite with her performances and having solid chemistry between Klein, whose character sees him more than a jock when he joins the choir.

And while the adult characters weren’t an important factor in here since the teenagers are the primary focus throughout, you can never go wrong with Eugene Levy as Jim’s awkward dad, Noah Levenstein. You always wait in anticipation whenever Levy is in a scene because he brings out such comedic dialogue anytime he and Biggs share any screen time. We can always see him as the saving grace for the rest of the franchise if one movie cannot be entertaining. Who wouldn’t want him as a father? Another one that should be mentioned is Jennifer Coolidge as Stifler’s mom and the scenes she shared with Kaye Thomas that share similarities to The Graduate if playing “Mrs. Robinson” wasn’t a hint. And I can believe this was the movie that coined the term “MILF.” 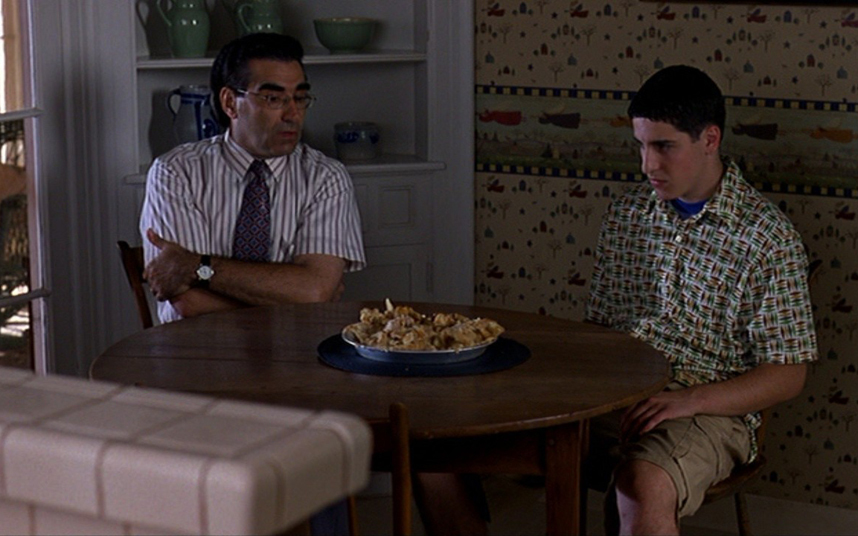 But does it make you laugh? Well, it’s a comedy, so it does its job of making anything funny happening on screen. Yes, this goes out its way of relying itself on the gross-out humor that’s to be expected, but you never get bothered by them because they’re just too hilarious to consider them dumb. The scene with Jim and his dad in his bedroom talking about masturbation is a standout moment.  There’s one memorable scene where Jim has sex with an apple pie because Oz has said sex feels like warm apple pie. That scene will never fail to make me funny, but I have to wonder how that came about in the script, and would it work today. Was it even considered controversial? Oh, well. And then there’s also the parts where Stifler drinks Kevin’s beer with his “stuff” inside, and Finch having diarrhea inside the girls’ bathroom at school. In talking about the former, my mind was a little innocent when I was watching it, as I honestly thought Kevin took a quick pee in the cup.

As far as the other theatrical sequels go, I think American Pie 2 is underrated, American Wedding was alright, and I have to re-watch the fourth installment American Reunion again to see if it can make me laugh more than a few times. And like any normal person, those awful direct-to-DVD “Presents” spin-offs should have never come into existence because of how to complete garbage they are. However, there’s supposedly going to have a new sequel later this fall. Why, Universal?

Let’s not forget that 1999 was the year full of teen comedies. While this isn’t up there with 10 Things I Hate About You, American Pie has got to be in the top three funniest from that year. Even after 20 years, you forget that while it’s hilarious, and doesn’t break any new grounds for the genre, it manages to be heartfelt whenever it needs to be, never becomes boring. Something like this will not be for everyone out there, but if you have a decent sense of humor and just want to see a teen movie that doesn’t try to hold back anything, then give this a watch and see for yourselves to relive that nostalgia.