After waiting nearly three years for this to come out, creator J. G. Quintel’s long-awaited animated comedy series, Close Enough, is available to watch in full on HBO MAX. That right there is another reason why I decided to keep the streaming service for another month since there’s no way of missing out on another hilarious show about growing up in the way I imagined from its creator.

The series follows Josh Singleton and Emily Ramirez (voiced by Quintel and Gabrielle Walsh) are a married couple with their five-year-old daughter Candice (voiced by Jessica DiCicco), who lives in a Los Angeles duplex with their friends Bridgette and Alex (voiced by Kimiko Glenn and Jason Mantzoukas), who happen to be divorced. As they navigate through their adulthood with Josh as an aspiring video game developer and Emily working at some kind of food corporation, they have to deal with unusual aspects of life through many strange days ahead of them.

Close Enough was a series I was very much so anticipating ever since I heard Quintel would be doing another animated series. His last series Regular Show, which aired on Cartoon Network for eight seasons, is one of the coolest and inventive shows I’ve ever watched, and I consider it one of my favorite shows on the children’s network. Seriously, I was going to watch this no matter what. This series was originally developed for TBS three years ago since they released a trailer, which made it look amazing. But thanks to Louis C.K. and the pervert he turned out to be, the show was shelved without knowing if it will still be on television like Adult Swim. That long of patience was killing me. Thankfully, HBO Max was smart enough to find it a new home, and it’s the best way to breeze through every minute, making this a worthy new series to change up your style.

Aside from the fact this and Regular Show are developed by the same person, it’s easy to say they are similar, but Close Enough is like Regular Show‘s more mature spiritual successor in the best way. But these are new characters in a different setting to get eased into quicky. It’s another show where the characters are thrown into these bizarre situations and have to get out of it by the end of a typical cartoon length. As simple as that sounds, I was on board with what was going down. The animation is the same style, which was what I was hoping for, but it still looks great. By the way, I’m very certain they set this in the same universe because in the episode “The Perfect House,” there’s a quick shot of the Park House, which makes it confirmed, right? I believe so.

The characters here are very likable, and that’s always a major plus when watching a new series, along with the vocal performances. Josh and Emily are the kind of young married couple you’re rooting for because of the family dynamic I bought and want to hang out with, though it’s uncertain with the hijinks going about. Alex is basically just a cartoon version of Mantzoukas based on his appearance; that goes the same with Josh, but I dug the friendship between everybody.

From what I was binging for most of my morning, this is made for those relatable young people in their 20s or early 30s who are still in the stages of growing up and having no clue what will come ahead in life with the matter of responsibilities. I don’t think I and everyone will experience owning 3 grand to stripper clowns, a time-traveling snail, or be in a nightclub that turns out to be like Logan’s Run to make any normal day existing, but it’s what you can expect from a project from Quintel. It didn’t make me feel like I’m getting old, but it’s always a thought. Why Close Enough works well is because of things that are essential to a good animated series: Being fast-paced and bringing the humor. That’s the same formula used for Quintel’s previous show, and the tone fits here. Every episode, split into two parts with different storylines, is like that, and you’re always invested with what each character we will catch up with. A show like this isn’t meant to be aired on Cartoon Network or made into a live-action series of sorts. Trust me when I say this isn’t something children should watch since there’s swearing, drugs, and censored nudity involved. In that case, show this when they’re a little older. The series even has pop culture references that were written good enough to where they weren’t annoying, at least to me. You know it’s good when you rewind multiple times due to how funny a joke was, especially with there are robots with Boston accents. How come I couldn’t think of that?

As for problems where I can them improving upon further seasons, I would’ve liked to see more with the characters of Pearle (voiced by Danielle Brooks) and her adopted son Randy (James Adomian). I didn’t feel like they were developed that much throughout the season, or they didn’t have much to do in the episodes they were in. And though I enjoyed how it’s an easy watch with two 11-minute episodes, I would’ve love to see certain storylines within longer episodes with that quick pace a part of it. The last episode, “The Canine Guy,” is the only full episode running 22-minutes, but I would’ve love to see everything else before it expands on their respective plots longer. 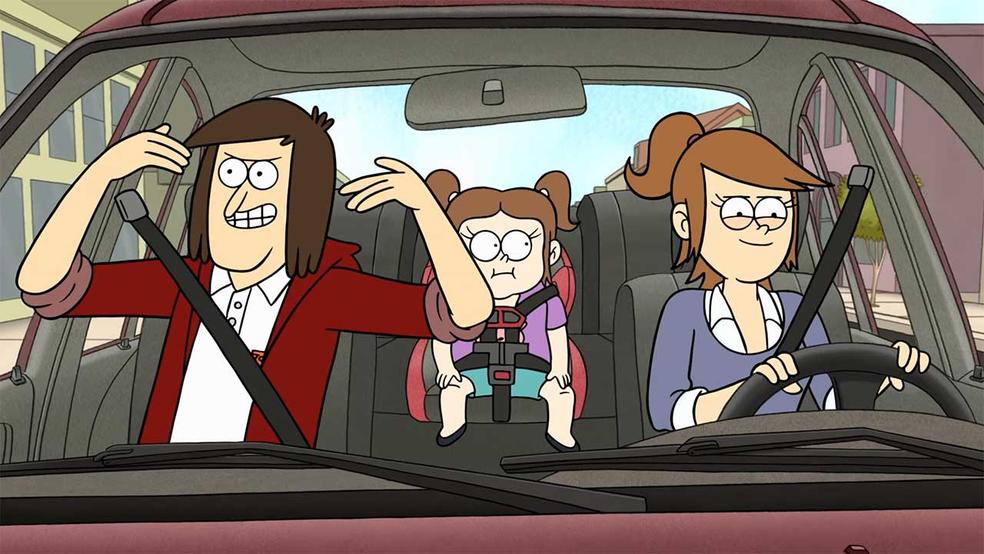 Is Close Enough worth recommending? Absolutely. Fans of Regular Show and or kind of adult animation will have a blast sitting through this, as it’s fast-paced and outrageous humor will sure to please anyone to cheer up if you’re feeling down because there’s a lot of fun to be had here. Hopefully, there’s more to come with season two to be the next big thing. To end my thoughts, I’ll leave you with a quote only Josh would say, “And that’s why I think Best Picture might go to Mr. Magorium’s Wonder Emporium.”