Looking back at what the last decade brought to the swords-and-sandal, its track record has to be some depressing things I’ve ever seen since every single one of them ranges “meh” to extremely awful. Going back further, we’re lucky Ridley Scott directed 2000’s Gladiator as the ultimate return to form to the genre for the new millennium before the likes of Alexander ruined it in its early downfall. Since it just had its 20th anniversary, it’s my duty to give my thoughts out, in this life or the next.

What’s the Story: Roman general Maximus Decimus Meridius (Russell Crowe) is respected by his fellow men and by his emperor Marcus Aurelius (Richard Harris). His son Commodus (Joaquin Phoenix) isn’t pleased with the fact his dad chose Maximus as the new ruler of Rome. Following this decision, he demands Maximus to be executed. Escaping his death, he turns to his home where his wife and son are murdered. Unable to save them in time, he’s then sold into slavery where he’s forced to train as a gladiator. To win the crowd, Maximus must rise to the top to push forward his freedom and exact vengeance on Commodus for what he did.

This marks the first of four collaborations between Scott and Crowe, and it shouldn’t be a shocker to know this is the only great one since the other three (A Good Year, Body of Lies, Robin Hood) weren’t well-received. He completely owned this role as Maximus, which might be the role actor is best known for in his career and the one that pushed him to be more of a leading man after Curtis Hanson’s L.A. Confidential and Michael Mann’s The Insider. You can’t picture anyone else in the role since he gives a commanding performance. Nothing is stopping this protagonist from getting his way to the top. Using his skills as a general helped him live through each fight. All he wanted in life is the go home and be with his family. That’s now stricken from him in a heartbreaking moment that no man should ever see. His role earned him the Oscar for Best Actor. Did he deserve it just from re-watching it recently? Kind of hard to say since it was between him or Tom Hanks in Cast Away. But I’m just happy he has one to his name. This might be a hot take, but as much as I loved his performance as Maximus, I always thought his role as John Nash in A Beautiful Mind is much better.

The one person who came very close to being the scene-stealer from Crowe has to go to Joaquin Phoenix as Commodus, a villain you love to hate. His performance in this doesn’t get much talked about anymore, and it’s honestly one of my top three favorites from this now Oscar-winning actor. The scene he has with his father after he told him he would not be emperor ultimately showed he’s an understandable villain for wanting to live to his expectations. His character the evilness of both Loki and Jaime Lannister from Game of Thrones, especially the latter since he can be a little creepy with his sister. You’re a crazy person if you don’t think he was great in this film.

Some other performers who I thought did a great job were the beautiful Connie Nielsen as Commodus’s sister Lucilla, Richard Harris, who I just remembered as the original Dumbledore from the first two Harry Potter movies as Marcus Aurelius, and Oliver Reed as Proximo, the former gladiator turned trainer. I always knew this was his last film since he suffered a heart attack while taking a break from production. But what you might’ve not known is that they used a digital body double to finish his scenes, and I wouldn’t even know aside from a couple of shots. It’s crazy how it was possible to seemingly recreate an actor’s face back in 2000, and it’s sort of iffy nowadays.

Talking about Scott’s direction in how he envisioned his take on Rome, I can really tell that he was a fan of Spartacus and Ben-Hur and was influenced by both of them to make this film for a modern audience, making him the right choice for the job. He put together a beautiful-looking film from the scope of feeling like you’re back in the times of Rome, interacting like you’re in the colosseum rooting for the gladiators to fight for their lives. He has been a hit-or-miss director sometimes, but it’s a splendid thing this was a hit after some noticeable misfires (1492: Conquest of Paradise) and made this a familiar premise of strength and turn it into something memorable to new heights. Because of this, Scott earned his second Oscar nomination for Best Director.

As for the colosseum sequences, they were incredible. Every movie that tried to copy this film needs to take lessons on how to helm arena scenes that never dulls into stupidity. Violent as this may appear, it shows the dangers of being a gladiator when you’re fighting for your survival. I wouldn’t even last three minutes. How intense is it when Maximus is fighting the undefeated Tigris of Gaul and have chained tigers to make the fight more difficult? Even the opening battle against the Germania tribesman was never uninteresting from when it starts.

When talking about everything with the production aspect, there’s so much to be praised. I love the costume/ production design of how it looked like everybody and its settings belonged in that period. That goes the same with the visual effects to help out the visual look at recreating Rome’s colosseum is unbelievable. The cinematography from John Matheson is gorgeous to look at with its color scheme in contrast to the dark opening and Rome representing the light. And I can’t forget to talk about how amazing Hans Zimmer’s score is because he has done nothing bad as far as I know. As I was listening to it, it seems like he recycled some of his pieces for Pirates of the Caribbean.

But Gladiator isn’t a perfect film, and here’s why. Scott’s movies are relatively long, which might contribute to why most of them aren’t too good. I thought there were some pacing issues from here to there when there isn’t a battle going on about. Also, as much as I thought this was a great script from David Franzoni, John Logan, and William Nicholson, it might not be the most historically accurate to what happened during the Roman Empire in real-life and some elements of the dialogue weren’t as strong as I thought. As a whole, it’s a remarkable revenge tale that’s hard to dislike. The more he wins, the more likely of a chance to getting closer to killing Commodus. 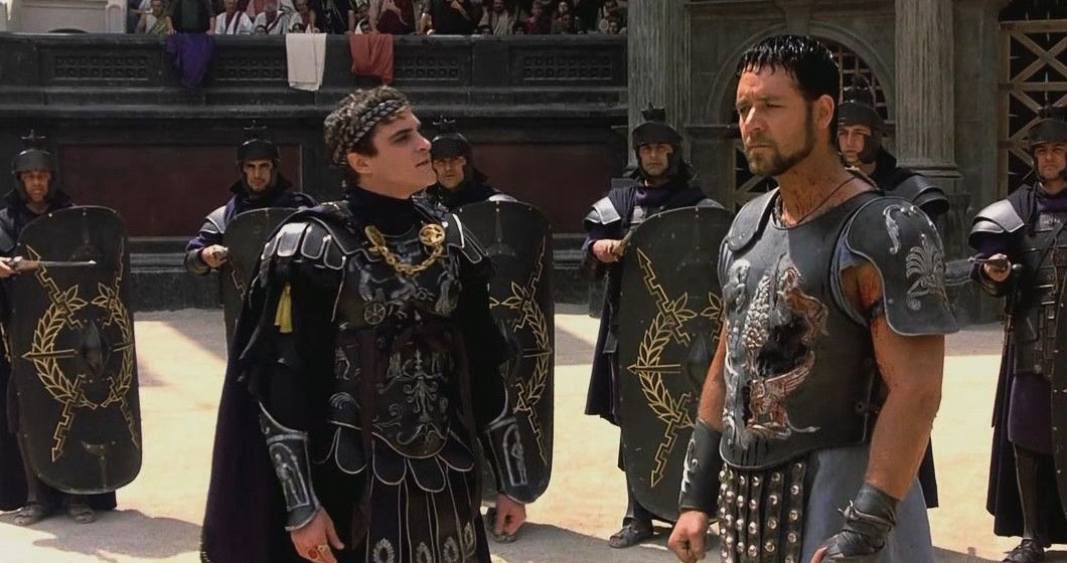 Becoming one of the most popular films of the year and the director’s career, it was nominated for 12 Oscars at the 73rd Academy Awards, winning five, including Best Picture, making it one of the rare summer blockbusters to win that notable achievement. Not only that, but Crowe for Best Actor and the film also took home Costume Design, Sound, and Visual Effects. Some have said this didn’t deserve to win over something like Traffic or Crouching Tiger, Hidden Dragon. We rarely have big summer movies to take home Best Picture, at least one that started the summer movie season.

In the end, Gladiator is one of Ridley Scott’s better films in his filmography, right up there with The Martian and Blade Runner. This return to form of the swords and sandal dramas brought out exceptional performances from Crowe and Phoenix, cool action, and a rousing story to get excited about. There have been talks about a sequel for a long time, but there shouldn’t be, even if it was a prequel. Since this was seen as the next Braveheart, another Best Picture winner that’s pretty similar, which one is better? That’s a question that shall be answered later on. Was I entertained? Yes, I was.