Never did I thought some of Stephen King’s work would be translated to feature films. 2017 has become a great year for King himself. It was already a big hit as well as becoming one of my favorite movies this year, while The Dark Tower was forgotten already. Now, the third adaptation to now out this year with Gerald’s Game is definitely something worth watching.

In this Netflix original movie, Jessie (Carla Gugino) and Gerald (Bruce Greenwood) go away for a weekend getaway to a remote cabin where can hope to rekindle and reconnect with each other. To spice things up for them, Gerald handcuffs Jessie to the end. But after Gerald has a heart attack and ends up dead, she’s still handcuffed with nobody in sight and can’t move off the bed while experiencing her darkest fears. 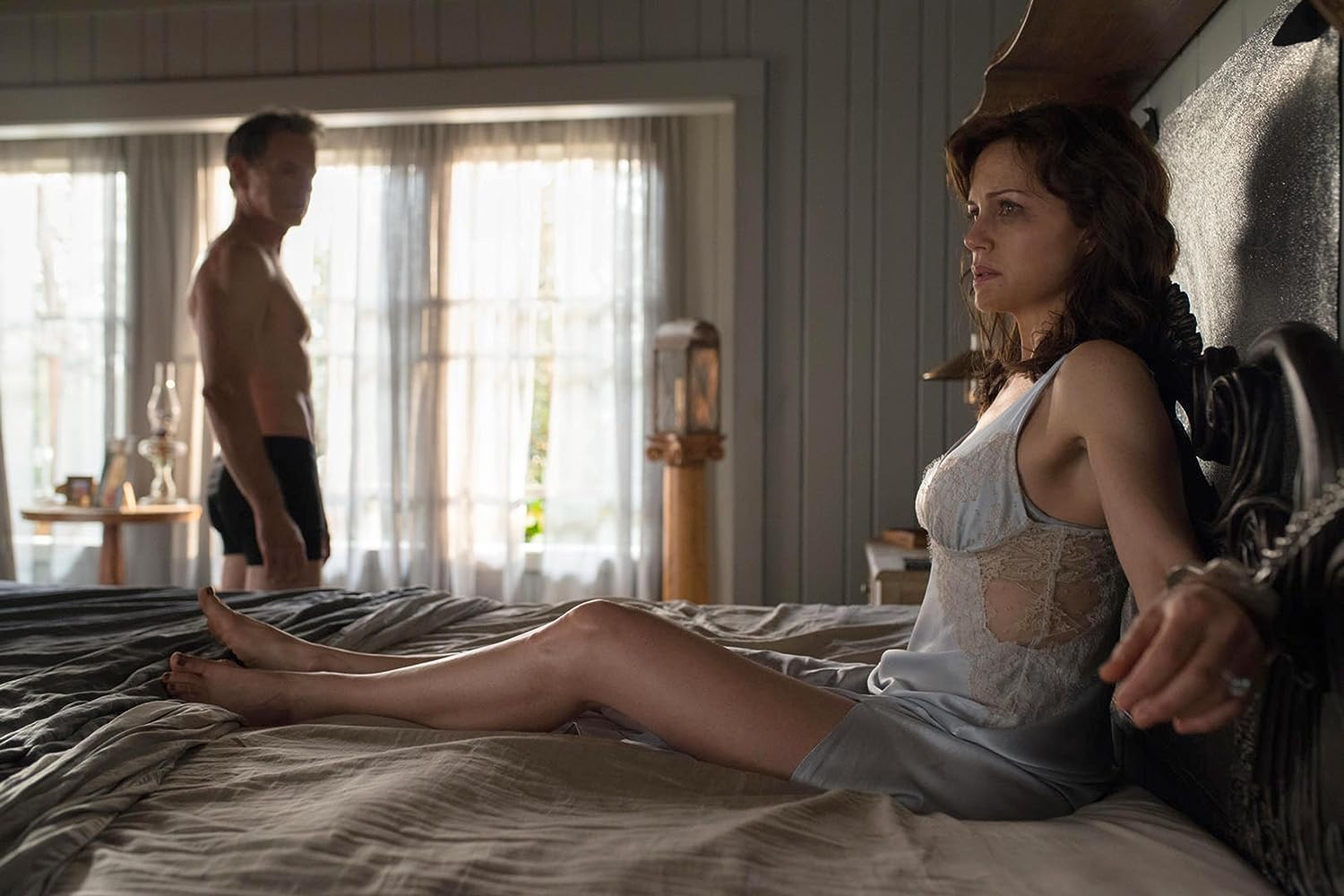 Before going into this, I knew this was based on one of King’s books, but I never heard of it until hearing about the movie. But just like with It, it’s tricky trying to adapt King’s work for television or film based on his creative mind. However, some fans said it’s one of King’s least favorite books he’s written. Didn’t know if I wanted to check it out, but from watching Chris Stuckmann’s review, he loved it. Once finally checking it out, Gerald’s Game is a smart, psychological thriller that never lost me.

Right off the back, I always liked Carla Gugino for a long time, and this is a performance that’s going to be remembered for the year. She’s basically stuck in this position a large portion of the movie just wanting her to get out of this scary situation. She was incredible from beginning to end making me want to figure out how to survive a surreal dilemma.

We delve inside her mind in a way that keeps you invested in what’s going to be shown with her struggle in the past and present. Since she’s dehydrated for a few hours, Jessie starts visualizing another version of herself and Gerald representing some kind of good and bad angel trying to help her out. By the way, this might be the best performance I’ve seen from Greenwood. And the scenes where it’s flashbacks involving Jessie and her father (Henry Thomas) leaves some dark, trauma secrets that are unnerving and a little creepy.

Director Mike Flanagan (Oculus, Hush, Ouija: Origin of Evil) should be a director that I should give more credit than he deserves when he’s onboard to be attached horror movie. And while this wasn’t really scary at all, he does a great job at making you scared for what’s about to come now and in your mind about the past. Almost makes us be in Jessie’s position. He made a lot of scenes with Gugino tense with small problem solving or moments of no dialogue. Flanagan’s script that he co-wrote with Jeff Howard seems to do the book justice.

There was a moment in here that that is without a doubt a stomach-churning scene that made me hide behind my hands while it was happening.

The only flaws that the movie has are a couple scenes that dragged just a little bit and the ending kind of lost me, as some will agree with, as the tone the rest of the movie was gaining towards just vanished. Other than those issues, this was a surprising thriller that I had to idea that it was gonna be this great.

Gerald’s Game is absolutely thrilling with Carla Gugino’s best performance to date and making this one of the best Stephen King adaptations.