How awesome can awesome get? The greatest enjoyment ever put to film brought on a new level. Literally. Scott Pilgrim vs. the World ensues in becoming a great video game movie that isn’t even based on one. Once it begins, you’re transported into a world of epicness.

What’s the Story: Scott Pilgrim (Michael Cera) is a 22-year-old slacker living in Toronto and is the bassist for his band Sex-Bob-Omb and has begun dating Knives Chau (Ellen Wong), a 17-year-old high school student. When he becomes obsessed with this mysterious girl named Ramona Flowers (Mary Elizabeth Winstead), he has completely fallen head over heels in love with her. But to truly be with her, Scott has learned he must defeat her seven evil exes who previously dated Ramona, who challenges him in many fights. 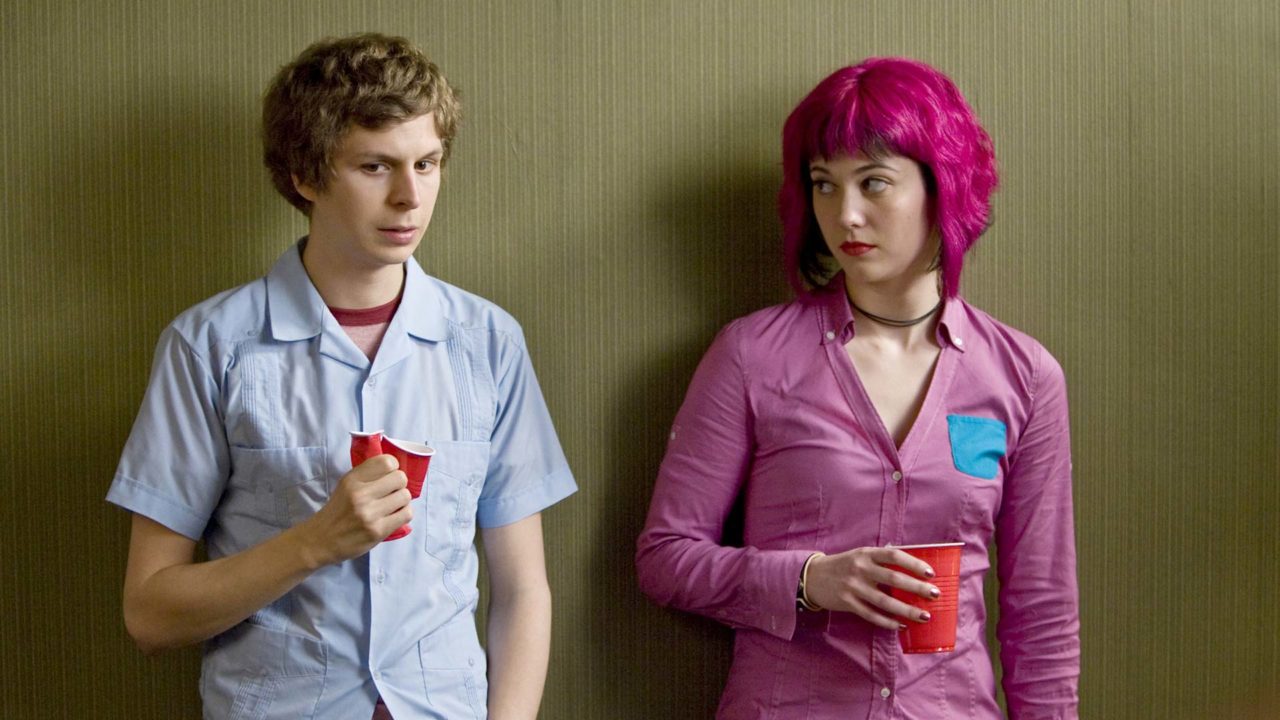 My excitement for Scott Pilgrim vs. the World was through the roof when this came out. I haven’t read the graphic novel series by Bryan Lee O’Malley at that point, but it wasn’t until I caught the trailers that got me hooked to see something cool. And it’s also because Edgar Wright’s name is attached to it. The anticipation was real when I bought a tee at Hot Topic because it was calling to me, like I was meant to wear this, and every time I wear it, especially in school, I get the most compliments from the shirt. I saw it opening night as it was the first movie I saw during the first weekend of eighth grade, and it was all I could think about while I was at school. Learning, what’s that? Right as the film opened with an 8-Bit version of the Universal Pictures logo and then the opening title cards, that was when I knew I was in for something incredible. For a geek like me, this was heaven for two hours.

Edgar Wright, who’s also responsible for the amazing Shaun of the Dead and Hot Fuzz, has a unique style of directing by how everything resulted in an imaginative way and with a creative mind like his, he and co-writer Michael Bacall (21 Jump Street) translated this manga series onto the screen on an all-time high. His direction knocked me off my feet when it looked like I was watching the graphic novel come to life on screen. Never would mixing anime, video game references, and rock n’ roll would turn out so awesome in life. You feel very a part of this world that would be nice to live in. After seeing this and reading through most of the novels after it came out, this is close to perfect that every director should take from before screwing up the fan’s favorite property. The translation from the popular manga is almost flawless and faithful, pushing aside certain elements they had to drop. 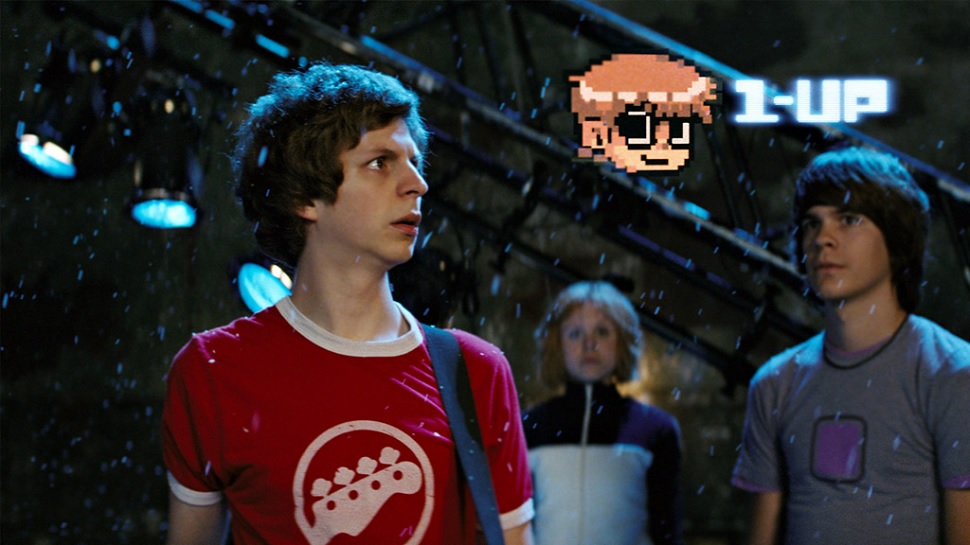 There’s nobody better to play an awkward lovable nerd than Michael Cera, because it honestly wasn’t hard to find someone else. He’s never going to have a ton of range with his characters, but this is a bit different from what his performance was in Superbad. In here, he’s an ultimate fighter coming out of nowhere every time his skills come into play when we come to be interested in this person’s struggle and find him oddly relatable under strange circumstances. Mary Elizabeth Winstead as Ramona Flowers was a beautiful but claim and collective female counterpart that’s well written. After rewatching this and Sky High around the same time, I’ve fallen in love with her again, maybe it’s the blue hair. They both have terrific chemistry with each other.

All of the action in here is unbelievable. We don’t give Wright a lot of credit when it comes to handling action in his filmography. It felt like watching a video game come to life whenever there’s a fight scene going on about, especially with the quick cuts, overhead shots, and change of aspect ratios. And by describing it as a video game, it’s better than 97% of actual video game movies that have come out and failed to capture the spirit of the games. The fight combat scenes were so fast-paced and perfectly choreographic with each fight that happens. It always occurring whenever Scott has to deal with the seven evil exes: Matthew Patel (Satya Bhabha), Lucas Lee (Chris Evans), Todd Ingram (Brandon Routh), Roxy Richter (Mae Whitman), Kyle and Ken Katayanagi (Shota and Keita Saito), and Gideon Graves (Jason Schwartzman). Does it sound very challenging? Yes. But does it ever get boring? No way.

And can we please talk about the rest of the supporting cast here? There’s never a performance wasted in here as all of them were memorable in their way. There’s Ellen Wong as Knives Chau, Anna Kendrick as Stacy, Scott’s sister, the scene-stealing Kieran Culkin as Wallace, Scott’s gay roommate, Aubrey Plaza as Julie Powers, and Brie Larson as Envy Adams, Scott’s ex-girlfriend turned rockstar of Clash at Demonhead. Plus, you can’t forget about the bandmates Mark Webber as Stephen, Alison Pill as the deadpan Kim Pine, and Johnny Simmons as “Young” Neil. My two favorites out of the League of Evil Exes comes down to Chris Evans and Jason Schwartzman. Evans as Lucas Lee, the skateboarder turned action star bro who owns his skate company, was a blast to watch for his limited screen presence, and Schwartzman went in on this role as the main ex-boyfriend out them all. To me, I always saw Gideon as Max Fischer from Rushmore if he turned into a hipster record executive. How cool is it this single film features the likes of Superman, Captain America, Captain Marvel, The Huntress, and The Punisher (Thomas Jane making a cameo as one half of the Vegan Police)? It was the Marvel/ DC crossover we didn’t expect would happen.

If it’s an Edgar Wright film, it has to make you laugh, or life doesn’t make sense. Every comedic beat hits hard, and it’s always the kind of jokes you have to go back on. The laughs never get old on repeat viewings when you’re still smiling moments later. I wasn’t expecting this to make me laugh all the way through, but this is my kind of humor. Where else can something have Seinfeld’s theme and a studio audience when Scott enters his home or when tying your shoe becomes important? Only this. You have no idea how often I say “Bread makes you fat?!” whenever it pops in my head. Heck, I didn’t know that. It’s one of those movies where you know almost every line dialogue from memory and never becomes sick. When I was watching the table read for Entertainment Weekly recently to celebrate its tenth anniversary, it was fun watching the cast read the script and knowing what they’ll say before it happens.

Even on a technical aspect, there are so many to compliment. Scott Pilgrim vs. the World has some of the most exciting editing I’ve ever seen, and Wright is known for his seamless scene transitions that can make any editor jealous. In capturing the tone of its source material, every frame of color explored from every edition of the series is like falling in love with someone you haven’t talked to in a long time. They even included the actual comics for when Ramona explained the backstories. Every little subtle detail Wright throws in the background concerning the evil exes (number-wise) is noticeable when watching it again. The music makes you want to start a garage band because Sex Bob-Omb’s has a killer sound to them, especially when they have tracks like “Garbage Truck” and “Threshold” to rock out to. And when I say it feels like a comic or game, the way moving text and video game imagery comes on the screen when somebody gets hit is visually pleasing.

How could I describe this with three movies to get people interested? I thought of two things while watching it again that might make sense. Think of this as the embodiment of the most popular student in school (boy or girl) who’s friendly to both the cool kids and geeks alike. And when comparing it to similar movies, it’s an impossible thing to come up with, but take Ghost World, Nick and Norah’s Infinite Playlist, and Bill & Ted’s Excellent Adventure, and what you get is an explosion of epic portions. 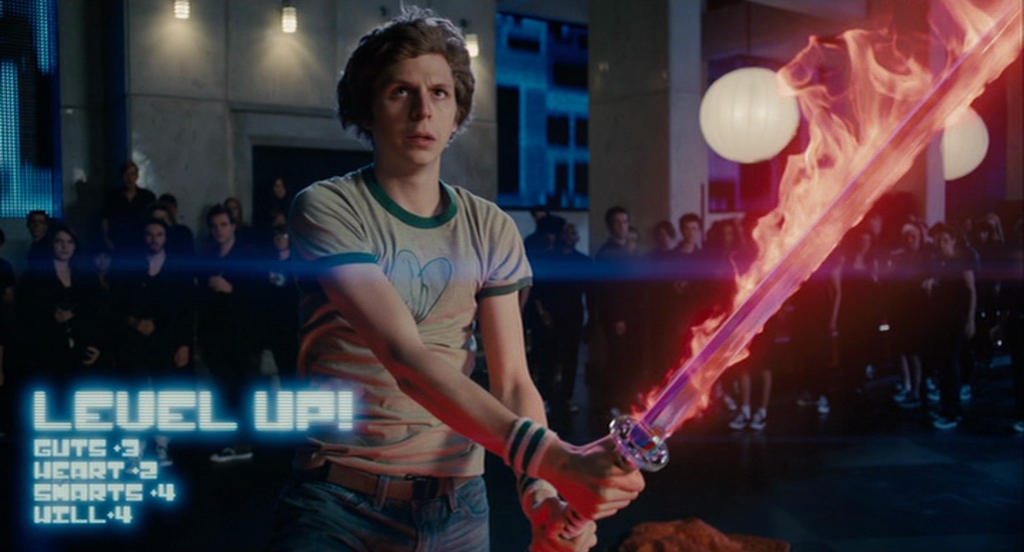 But just like everyone else in the world who also loves this, it’s a tragedy seeing this bomb at the box office despite receiving positive reviews. It was number five in its opening weekend and dropped to tenth in its second. What was wrong with America when we had one of the better movies to come out that month and Vampires Suck managed to make more money domestically? Were we this dumb a decade ago. The Academy didn’t even give this a shot when it wasn’t nominated for Visual Effects, Editing, Sound Mixing, or Sound Editing. This is not a joke! The film still gained a cult following over the years, but this was the first movie where I described it as “underrated.” That’s a term I throw around a lot these days, but in the case of this, it is the very definition as it’s the MOST underrated movie I’ve ever seen in all my 24 years of living on planet Earth.

Do you want to know what rules? This. Scott Pilgrim vs. the World is a fantastic adaptation in Edgar Wright’s wheelhouse with cool dazzling and stylized action sequences, laugh-out-loud humor, and a pretty awesome story with a relatable lead, except the fighting evil exes part. As the summer movie season of 2010 didn’t turn out to be the best, we were blessed to have another great to appeal to everyone. It’s one of my favorite movies of all-time, and if there’s ever a time to showcase a top 30 list, let it be sure it’s up there for me. I’m in lesbians with this bonafide classic piece of filmmaking.