It’s been a little bit since talking about a new release, and that’s probably because I’ve so caught up with older movies that I never know when to check the others out. Or maybe because not going to the theater has been hard on me and everyone else. With An American Pickle being released on HBO MAX, not that I had the highest of expectations for this besides its lead, but it’s the first original movie to be shown on the streaming service. If there was another reason to keep it for another month.

What’s the Story: Herschel Greenbaum (Seth Rogen) is a struggling but upbeat ditch-digger who immigrates to America in 1919 in hopes to build a bright future for his beloved, growing family. One day, while working at his job at the pickle factory, he falls into a vat of pickles where he’s trapped inside for 100 years. Over a century later, the brine preserves him perfectly and finds himself alive in present-day Brooklyn. The only living relative he now has in contact with is his great-grandson Ben (Rogen also), an easygoing app developer, the pair’s attempts to bridge their 100-year gap lead them to reconsider the true meaning of family – and the value of a really good pickle.

Knowing that the story was going to feature not one, but two Seth Rogen’s, I was up for it right away. Normally, it isn’t a new thing to watch an actor or actress play two characters on screen, and it’s a good thing that An American Pickle didn’t make it annoying. For playing duel roles that could’ve gone in a bad direction, I thought Rogen pulled it off with two equally acceptable performances where it was very believable to distinguish the characters of Ben and Herschel apart, one of his better roles in the past few years. This is his movie and his movie only. They sound the same, but it’s their personalities make them different from each other. Besides noticing one has a huge beard and one doesn’t, Ben is laid-back trying to get his app he’s been working on for five years through the door and Herschel acting like how somebody would be in a different country.

Brandon Trost makes his directorial debut here since he worked as a frequent cinematographer on a bunch of Rogen’s films, such as This is The End, Neighbors, and The Disaster Artist. Being how this is his first time behind the camera tackling a ridiculous story like this, he made it work, as it can be viewed as Encino Man with brains. I didn’t know how to react when I first heard about this concept and thought it would be crazy as the title suggests. In reality, it stays grounded about family heritage and taking the time to know more about loved ones with the accomplishments we show in life. He does a solid effort with capturing the lifestyles both characters are accustomed to with doing anything the old fashion way or from modern-day technology. For a movie originally meant to be shown in theaters from Sony Pictures, it was a good move for HBO Max to pick it up the distribution rights a few months ago since it’s much more suited– especially just from the overall look of it. 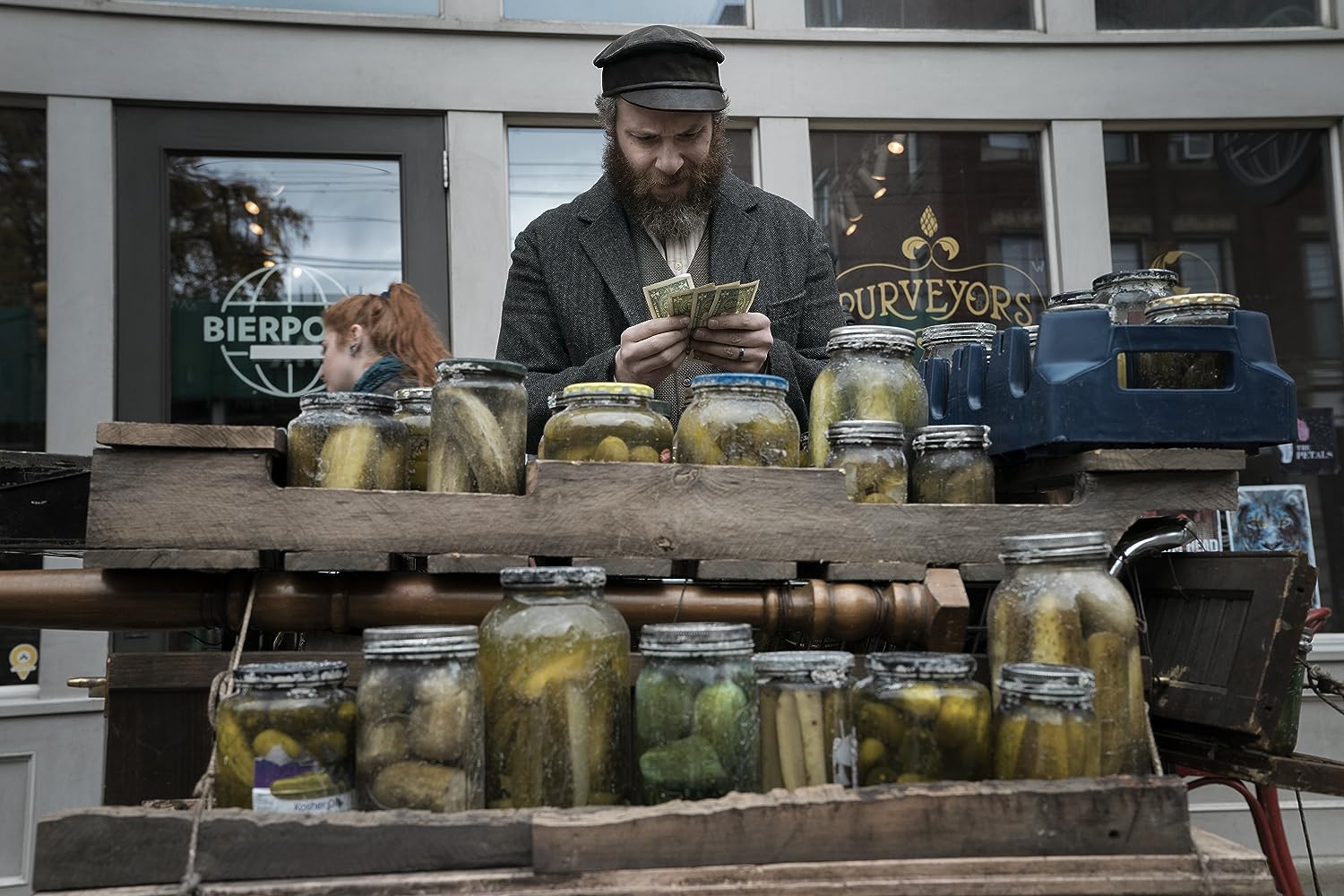 We see the entire movie as Herschel being the person who’s in the classic fish out of the water narrative with the position he’s in after many decades and is still coming to terms of what the world has become as time went along. We’ve seen it all before. It also makes you think about if you’re in the same scenario and given the opportunity to meet a long-lost ancestor of yours who’s the exact age as yourself. That would be a fascinating discovery when you want to know about how life was different in the past and the troubling experiences they must’ve gone through. But you also have to keep in mind about finding out if making your family name has been successful in the past and now.

But for the story from former SNL writer and Miracle Workers creator Simon Rich based on his 2013 New Yorker novella “Sell Out,” it goes in a direction I wasn’t entirely expecting. Did I read the source material it was based on? No, but I can assume reading it would have a better effect. Just from the title alone, my first thought was thinking it was going to be something outrageous, and the trailer made it look like it was shooting to be more of a comedy-drama. Truthful, that’s what we got. The first half got me to laugh a few times, and that’s due to it being quick without hesitation. There weren’t any moments that made me laugh-out-loud, but they were funny. Along the way around the second act, it was almost like they either put a pause on the humor or not every joke landed. I was disappointed that it wasn’t as funny as I thought it would be. A premise like this wore thin with its short runtime of 89 minutes after a while where I felt like they ran out of ideas with the two characters and decided to make it a war to see who can out beat the other, or when Herschel tries to become rich as a famous pickle maker.

In the end, An American Pickle doesn’t always work when the laughs don’t come in as often, but it’s still enjoyable to watch mainly because of the duel performances from Seth Rogen, showing us what he can do as a performer. He’s enough to try it. Maybe if it kept it in a more comedic tone, it would’ve made for a better time, and who knows how well this could’ve been if they still set a theatrical release. There’s a possibility you’ll like this more than me, but if you’re looking for something new to watch this weekend, it’s a mild recommendation if you have HBO Max available.

One thought on “‘An American Pickle’- Film Review”