We were so lucky 2002 gave us two great Steven Spielberg films that have been talked about in a positive light now: Catch Me If You Can and Minority Report. Either of them could’ve taken the top spot for the best of the year, and while I put the former in front, this being a very close second still deserves some praise. Given the opportunity to go back in time, I would’ve begged my parents to take me to see this in the theater, despite being six-years-old when this came out because it’s surely one of my favorite films from the famous director.

What’s the Story: Set in Washington, D.C. in the year 2054, murder has been eliminated. PreCrime is a system in the police division where three psychic twins are known as Precogs, and they can predict when a murder before it happens. There hasn’t been a murder since. That is until one day the head of the police unit John Anderton (Tom Cruise) finds out he will commit a murder himself. To stop this from happening, he’s on the run and has less than 36 hours to figure out how to stop it from coming true.

I watched the trailers a bunch of times before online when I was young and thought it was totally awesome. I bought the DVD when I was ten-years-old along with The Italian Job at Target, that was when I was obsessed with owning movies back then. I never finished it the first time around, and I felt ashamed to never know what was to come if I had watched it in its entirety. It wasn’t until late July 2014 when I watched it again as I was trying to develop my tastebuds for films from the past, but it blew me away. To this day, Minority Report is still in my top ten favorite Spielberg films of all-time.

The first time I watched this and got a hold of what the central concept it all about, it’s winded up becoming a fascinating thing to think about. Not just because it was crossing science fiction and thriller, similar to Blade Runner, but it puts you in some kind of mind-set, wondering if it would be possible to stop a murder from happening. Since we’re seeing a ton of crime going on a lot more from news coverage, it wouldn’t hurt if this ever comes true soon. How different would the world better if something like the Precogs becomes a reality, regardless of believing in the system? Its themes about morality and free will didn’t come to mind after I thought about it years later. Should it be our duty to arrest someone who might’ve not committed a crime? This system would catch people who have done nothing wrong yet, but is that all true? Who knows of what your future would be like for every living person in the world.

Whenever we hear about these stories about murders, do we already know if a killer will do such an act? Sometimes, we don’t know the answer since we’re able to stop it from happening. It’s not always easy to understand if we think about doing something or not in some kind of alternate future, as it might also be known as “A minority report.” The philosophy with a concept like this makes you think after it’s over. 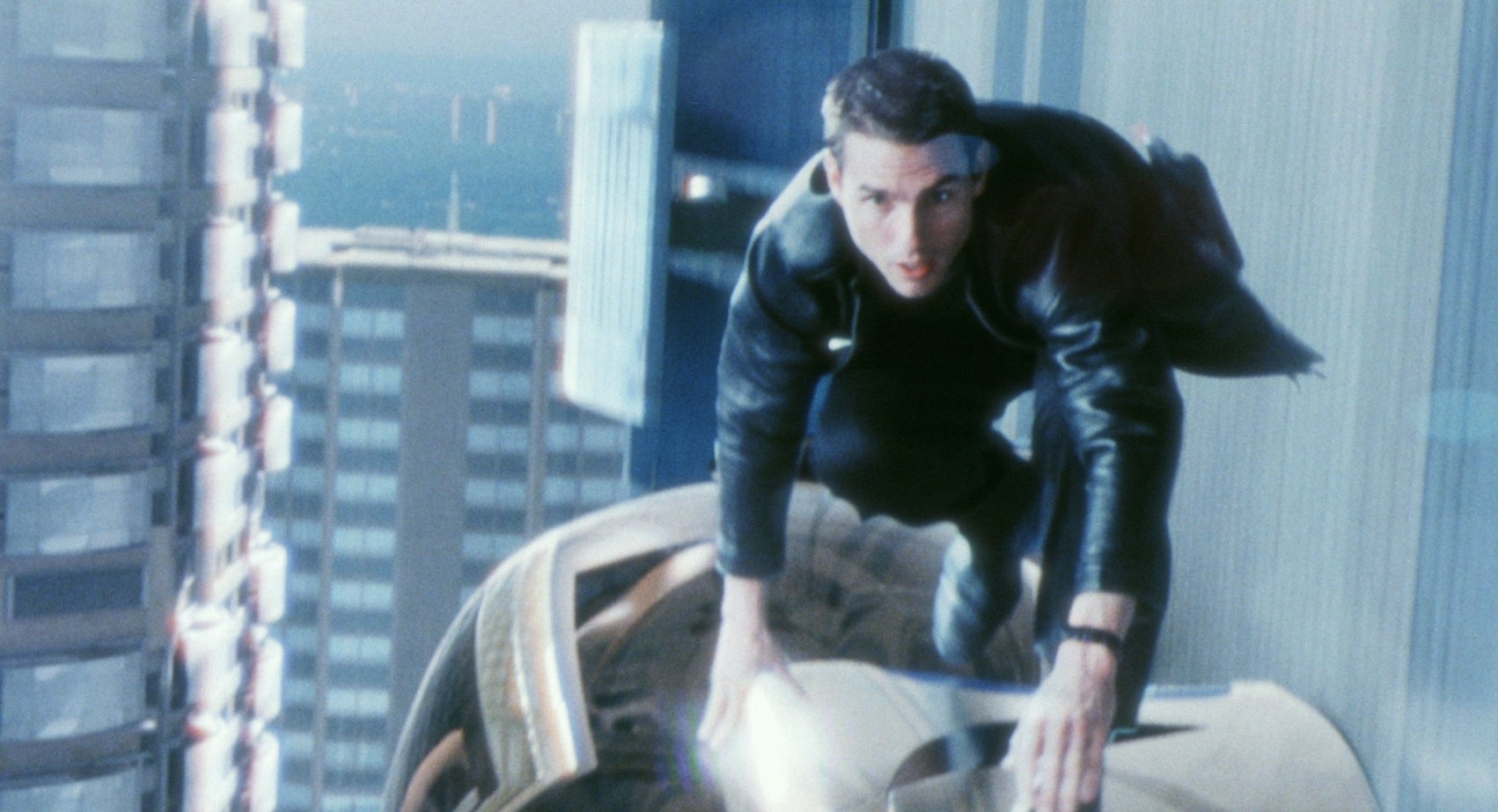 Minority Report wasn’t the first time the director tackled a story set in the future since this is following A.I. Artificial Intelligence, but it’s the most engaging in how he tackled this 1956 Philip K. Dick short story adapted by Scott Frank (Out of Sight) and Jon Cohen in a world that can be bought within the first ten minutes without questioning it. Have I ever read the source material? No, but for them to expand this out into a thrilling adventure isn’t one to forget. His style of direction changes when he explores different genres of film, yet it’s a blockbuster that’s different from what we expected from him when this came out. You honestly can’t put this under the category of fun when it’s much more in line with a dark tale in how it was looked. Cinematographer Janusz Kamiński made the look of the future Spielberg envisioned with a ton of white lighting to make it look like a cold-filtered world, which the color palette might bothersome, but I liked it.

This was the first collaboration with Cruise and Spielberg, as they would work together again three years later with War of the Worlds. Just the thought of my favorite actor would work with my favorite director had to be a dream come true for me, as well as many others. While Cruise is the main protagonist, we see him as a flawed and empathetic person. This is someone who loves the system, seeing nothing wrong with it, that he became an officer is because of what happened to his son Sean six years ago where he might be missing or dead, and he’s a drug addict using the weird futuristic drug he can’t quit on. But we’re following John Anderton throughout because we also want to figure out who would set him up and clear his name. Yes, we see him run and do all his stunts, but we still see him give a nuanced performance.

As for the rest of the supporting cast, Colin Farrell as Danny Witwer was an intimidating villain who’s there to audit PreCrime, seeing if there are any flaws with the system and tracks John down. Samantha Morton as Agatha, the main Precog John kidnaps to help him from making this mistake, was fine since I haven’t seen her in a lot of projects before. And the late Max von Sydow as director and founder of PreCrime Lamar Burgess gives a captivating performance as a character who isn’t what he seemed as the story progresses.

There aren’t a lot of action sequences in here, but there’s this incredible, tension-filled set-piece back-to-back where it involves jetpacks first and then a foot chase and a fight inside of a car factory right after. This was suspenseful at the right moments without becoming predictable when you think it’s going to be done. I also love the opening of showing us how the process of PreCrime works when this team is about to stop this man from murdering his wife and the guy she’s cheating with. Though we know what’s going to happen, it was still thrilling knowing what would occur if John didn’t make it in time.

The visual effects, even for 2002, still looks surprisingly great in the environment everybody lives in this world, especially with predicting how technology was used to when Cruise is using the system to look through the Precogs visions are how we now use touchscreens through our computers and phones we use to swipe everyday. Safe to say Spielberg’s vision of the future was ahead of its time, don’t you think? Seeing holograms and the self-driving cars isn’t much of a surprise since we’ve come to expect they would exist later on in life, but you come to terms that it’s possible to understand we could be living in the same world a bit closer.

If there were any problems I had while watching it, certain components of the film that’s a mystery were a bit hard to catch on and contain a few moments where you’re a little lost. And then it has a third act that wasn’t nearly as strong when it ends rather anti-climatic and has one of those Spielberg endings some don’t think stick to the landing. There’s this theory I heard about that I don’t know if it would’ve worked or not.

Roger Ebert had this as his favorite movie of 2002, and this was what he had to say, “At a time when movies think they have to choose between action and ideas, Steven Spielberg’s “Minority Report” is a triumph–a film that works on our minds and our emotions.” The fact this only earned a single Oscar nomination for Best Sound Editing and was completely ignored for Best Visual Effects bothers me. There was also a television series that aired on Fox, but I only watched one episode since I had a strong feeling it would not finish an entire season. 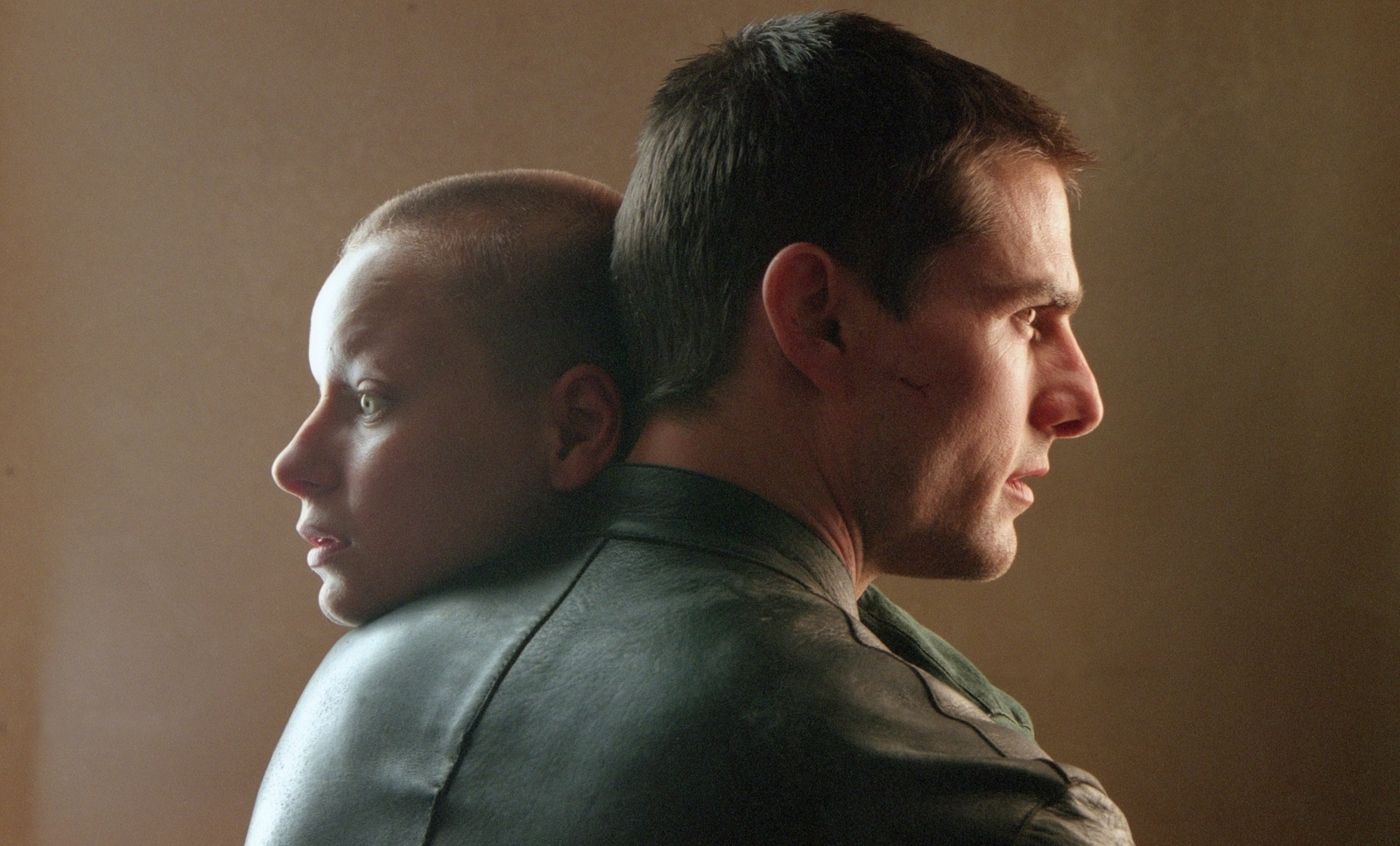 Minority Report is a Spielberg flick that doesn’t get talked about anymore, and it’s hard to know why. Not only is this one of his more underrated films in his entire filmography, but it’s also a classic sci-fi gem carried through great action, amazing visuals, and gives its audience a very relevant topic about freedom of choice. There have been many adaptations of Dick’s stories, but my favorite has always been this, with the original Total Recall right behind it.