Whenever you watch John Hughes’ 1986 classic Ferris Bueller’s Day Off, his fourth feature film, you have to wonder if you ever dedicated yourself to skip school and do something fun that wasn’t falling asleep during your most boring classes. For me, I really considered myself a square since I never missed a day of school in my entire life when I was required to go. But I would’ve just gone to the movies if I had my license back then. When re-watching one of my favorite comedies ever, how awesome would’ve been if we were determined to be like our dominant character. Chick chicka chicka.

What’s the Story: High school senior Ferris Bueller (Matthew Broderick) fakes being sick and skips school for the day before graduation. With that, he is joined by his girlfriend Sloane Peterson (Mia Sara) and his best friend Cameron Frye (Alan Ruck) can enjoy a beautiful day in Chicago while “borrowing” Cameron’s dad’s 1961 Ferrari GT California. While he’s out having all the fun in the world, Dean of Students Edward Rooney (Jeffrey Jones) is finally determined to catch him, allowing him to attend another year of school after missing nine times. Nine times? Nine times. 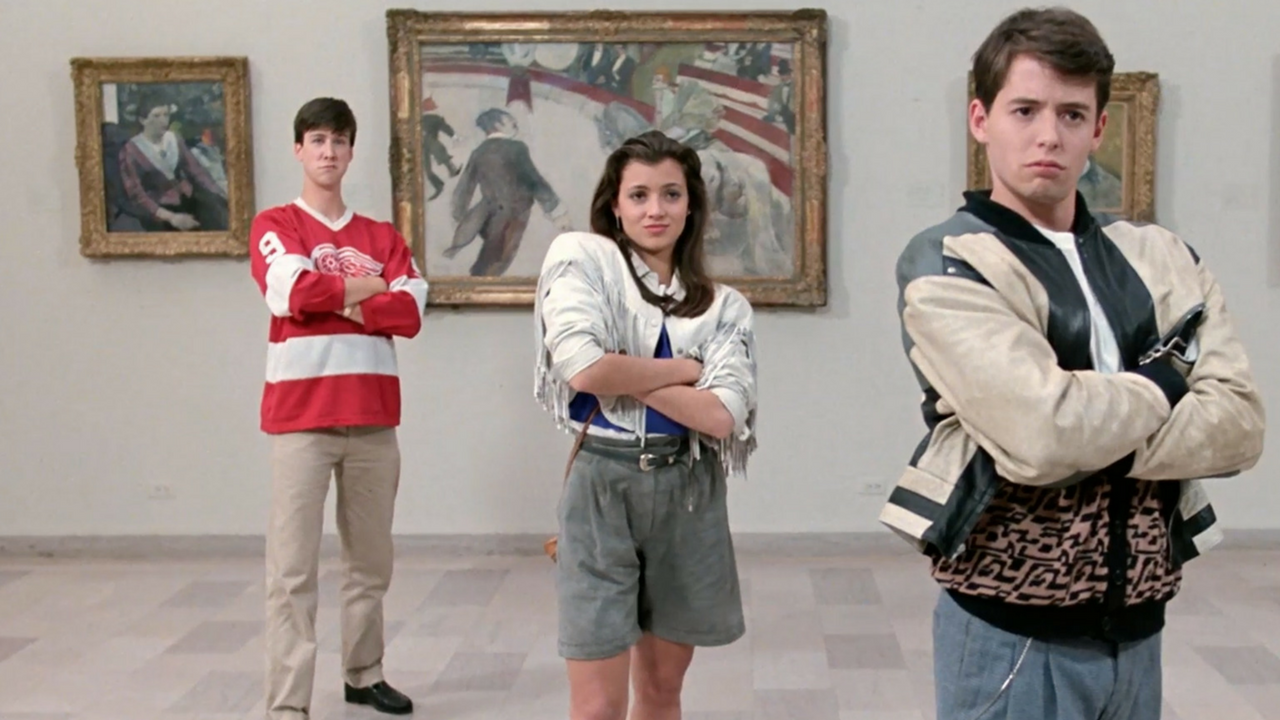 There have been a ton of ‘80s comedies that have been the go-to classics to making us laugh and live for the nostalgia. But what’s my favorite the more I think about it? That title goes to Ferris Bueller’s Day Off, without question. Out of all the movies Hughes wrote and directed when he was alive, this has always been the one that’s slightly better than The Breakfast Club or Planes, Trains and Automobiles just ever so. My mom had always loved this so much that she still has the VHS tape, and while we were at my mama’s house cleaning her kitchen, she brought it with her since one of her TV’s wasn’t working. Even for a movie that came out 34 years ago, it holds up well. Probably the first time I truly loved it was when I caught it on Netflix five years ago and just grew fond of it very quickly. Since then, it’s in my top five favorite comedies of all-time, believe it or not.

If you need to know how good of a writer Hughes was, he wrote the script in six days off of a simple premise he pitched to the head of Paramount saying, “I want to do this movie about a kid who takes a day off from school and that’s all I know so far.” This was made for anyone who was in middle or high school around the time this came out who have always wanted to spend an entire day outside school, and it’s targeted to those who never had the urge to ditch school because of our own priorities in life. Having the story set in Chicago shouldn’t come as a surprise since it is a Hughes flick, but I couldn’t help but to think the dialogue in here stays fresh as time goes on when it has its moments of wit, but stays low to the ground without being like a cartoon. These three characters going about their day like any teenager would without getting caught by their parents or even faculties members of the school.

Are there certain instances where they don’t exactly make sense from the start of the day to the end? Well, this is a movie where you have to suspend disbelief and not worry about a lot of things that make no sense while watching. I, for one, think it’s possible to go to the Art Institute of Chicago to look at some art, eat at a fancy restaurant, and catch the Braves/Cubs game at Wrigley Field all on the same day. Another reason why it’s a classic is that it includes its fourth wall breaks that might work with some people and won’t with others whenever a movie has to come to that. Here, though, this was the perfect way of the gimmick without becoming overbearing, because it was a way of knowing Ferris’ thoughts, and he’s the first character you think about when any movie resorts to breaking the fourth wall.

This was the role that made Broderick, who was 23 at the time of filming, a name for himself after this, and it’s the performance that’s always remembered by him. I’ve always thought of him as a decent actor when a good script is offered to him. His two best roles in his entire career come down to this and in 1999’s Election. Just in the first few minutes of screen time with him, there’s nobody else to play this character ensues cool and optimism that anybody can root for rather than against. While we don’t ever see him in school, it is assumed he’s very popular with his peers and a righteous dude. If his character appeared unlikable throughout this, it would’ve been possible to root against him. There’s no doubt his Golden Globe-nominated performance in this one where everybody can get on board with. Some might get a close look at this character and consider him either unlikable or selfish in how he doesn’t change at the end. You could look at it that way, but it never bothered me.

The chemistry he shared with Alan Ruck as Cameron and Mia Sara as Sloane couldn’t have been better, as you honestly believe they were friends who just want to have a day without any worries. Sara as Sloane worked so well playing opposite Broderick, and she was the only teenager of the core trio. Why wasn’t she in more movies afterward? Ruck, 29 at the time, should’ve gotten the same amount of praise as his co-star. He was the right choice to play Cameron. What he’s a relatable character is that he’s the exact opposite of his best friend, as he wants to stay in bed all day when stepping into a depression since his home life isn’t the best. I was surprised he didn’t even get some kind of Supporting Actor nomination anywhere. Just that scene with his and the Ferrari was powerful when looking at it again.

“When Cameron was in Egypt’s land… let my Cameron go!”

Jeffrey Jones is a name that shouldn’t be praised since he’s known for being a real-life creep, but let’s not forget he was already a prominent actor with roles in Amadeus and Beetlejuice just two years later. As Rooney, he’s the right person to root against in this movie because nobody wants to see authority figure get his way. The only people who would be on Rooney’s side, or Jeanie, in catching Ferris are most likely the adults who don’t like how he’s getting away with everything, mainly Jessica Day from New Girl.  And Jennifer Gray does a great job at playing Ferris’ sister Jeanie. Because let’s be honest, we’ve all had a sister similar to Jeanie where she will do what it takes to tattletale on a sibling. I also liked the scene she shared with Charlie Sheen while waiting at the police station, who tells her not to worry about what her brother does and care about yourself. Fun fact about Sheen’s minor role: he stayed up for 48 hours straight to get the look of someone who’s strung out.

Out of all the movies Hughes ever has written or directed, this has all the best jokes that are always the funniest whenever I think about it or whenever it’s on TV. It’s impossible not to quote along with that the characters are saying because they’re that memorable. How could you not say, “Bueller? Bueller? Bueller?,” when repeating a name in a classroom like Ben Stein? But outside the most famous line everybody knows, I also like, “Pardon my French, but Cameron is so tight that if you stuck a lump of coal up his a**, in two weeks you’d have a diamond.” The entire scene where Cameron pretends to be Sloane’s father on the phone with Rooney thinking it’s Ferris, the reaction on his face is the look of a dead man. The music is just the cherry on top of things. Every moment that was meant to hilarious made me laugh hard.

There are two scenes in Ferris Bueller’s Day Off that are some of the biggest standouts to come from an ‘80s comedy. The first being the entire sequences where Ferris is singing Wayne Newton’s cover of “Danke Schoen” followed by The Beatles’ “Twist and Shout” during the German Day parade because that’s the kind of scene that makes you want to dance in your home and sing along every time. While I love Gene Siskel, he is 100% wrong about what he said about that scene with his review with Roger Ebert. And the other being the part where he has to race home before his parents and Jeanie gets there first. Why that scene is awesome is because you’re hoping he gets back home without getting caught with any distractions in his way.

If there’s a lesson to take away from this that never gets old, every person should take a break and ease on the pedals to enjoy life while we still can. Whether it’s working a stressful job, going to school, or anything that’s taking all the joy from ourselves, it’s better to make life out of everything that comes our way. Why I feel like Ferris is a good person is because he’s doing what he can to deliver the perfect day possible for Sloane and Cameron. That, especially, goes for Cameron since he has never been out of his comfort zone before. This was going to be a day he would change if he’s willing to go along, making it the best day he ever lived. For how smart he truly is, he’s able to get away with everything that day. However, I will say stay in school as much as possible if you want to do something important in your life. We still talk about this to this day is because there isn’t any negative side about it.

Nobody, and it goes along with every movie Hughes ever made, should even dare to remake this. In a time where nobody had smartphones, the movie would’ve been over in 40 minutes if they caught someone plays hooky. There was already a television series four years later that lasted only one season and starred Charlie Schlatter as the title character and a pre-Friends Jennifer Aniston as Jeannie. I bet you didn’t know it was a TV series until now.

Ferris Bueller’s Day Off is absolutely worthy of being called a classic. It’s impossible to hate this. If you don’t like this, you’re a cynical person, and you have no right to speak freely about your opinion about movies ever again. It’s right up there with Superbad and Shaun of the Dead as a comedy that will always make me laugh. Funny, filled with energy, and leaving you thinking of never letting the good times end, what’s there to dislike? As a great man once said, “Life moves pretty fast. If you don’t stop and look around once in a while, you could miss it.”