Remember when Dora and the Lost City of Gold was first announced, and there was that rumor about Michael Bay being attached to produce it? Trying to think about that and how awful it would’ve been if he was involved. Thankfully, that didn’t come true at all with this live-action adaptation.

What’s the Story: Having spent most of her life exploring the jungle, nothing could prepare Dora (Isabela Moner) for her most dangerous adventure yet — high school. Accompanied by a ragtag group of teens, including her cousin Diego (Jeff Wahlberg)  and Boots the monkey, Dora embarks on a quest to save her parents (Michael Pena and Eva Longoria) while trying to solve the seemingly impossible mystery behind a lost Incan civilization. 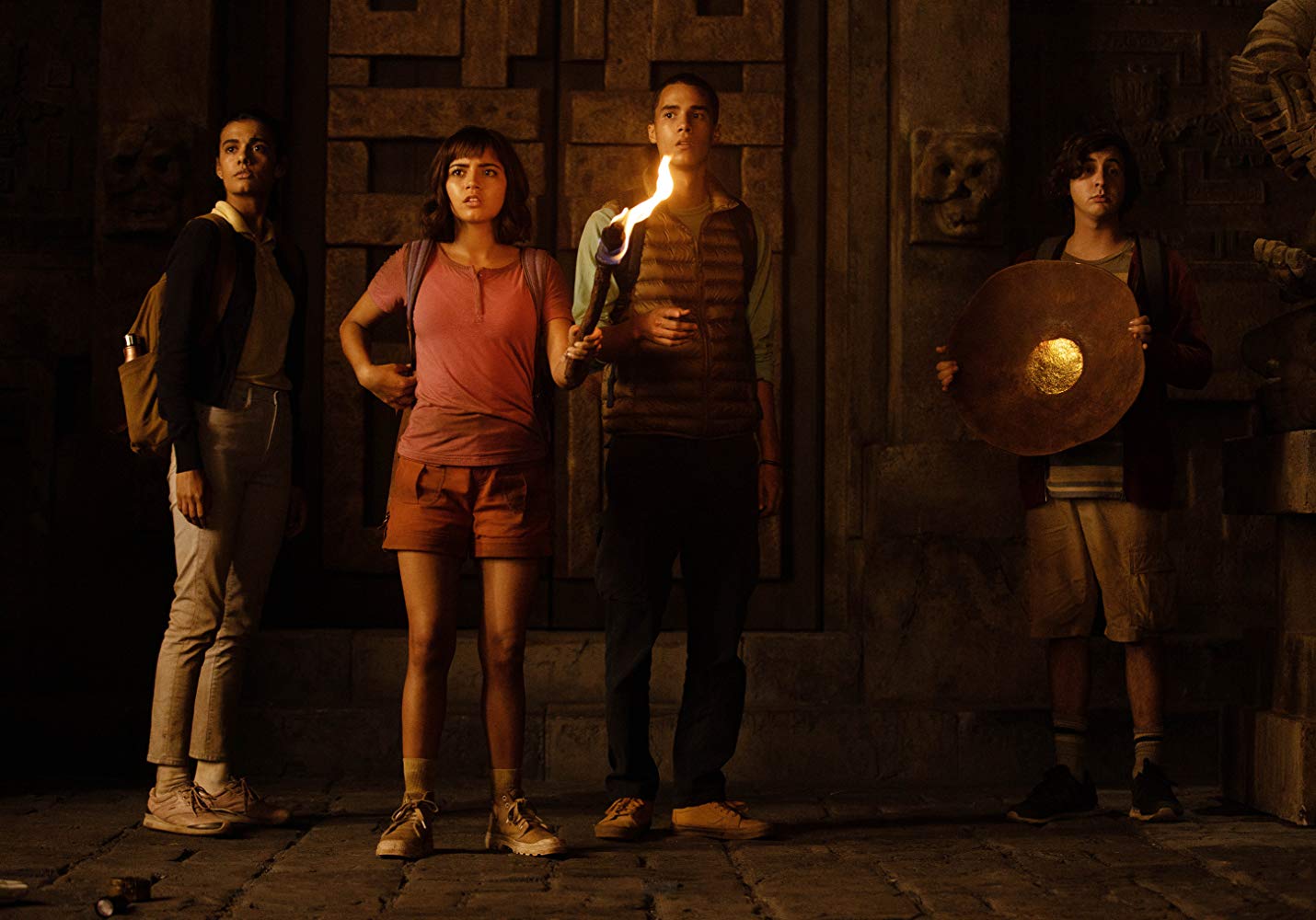 When I was growing up, Nickelodeon’s Dora the Explorer was a show that teaches kids how to speak Spanish. Though I can sympathize with parents who complained about the show being repetitive and testing their patience, especially realizing that a little girl shouldn’t wander around the jungle with a monkey. Now that it has received a live-action take on the popular franchise, it sounded like a very terrible idea for Paramount to give it the go since those who watched it when they were younger are now grown-up. Even when I watched the trailers, not only did I think it looked awful, but it just looked like that recent Hey Arnold! TV movie that was a fitting conclusion to the series. With this, I had this strong feeling this was going to be unbearable to sit through.  As with Dora and the Lost City of Gold, however, this wasn’t nearly as terrible as people thought it would be.

The best thing going for this movie is Isabela Moner’s performance as Dora. This is what you call an inspiring casting choice to play this character as a teenager. In the past, I haven’t been impressed with her performances with the expectation of Instant Family. She did what she had to do, and that was to bring so much positivity and charisma that’s to be shown from this character, and you completely understand that she’s just trying to be herself. Who else would’ve played her? I have no idea since she carried this movie on her shoulders.

As for the rest of the supporting cast, they were fine, though you don’t necessarily care about Dora’s classmates as much as you want. Eugenio Derbez plays Professor Alejandro Gutiérrez, looked to be having the most fun, and while never thought he was funny, there will those who will. But I caught on very quickly to how his character would play out.

The Muppets and Flight of the Conchords director James Bobin and screenwriters Nicholas Stoller (Get Him to the Greek) and Matthew Robinson (Monster Trucks) were able to take a silly premise from the cartoon and acknowledge that’s dumb, which made it kind of funny in the first half of the movie. That’s not today Bobin’s direction isn’t great in terms of the overall look when they arrive in the jungle, but it’s better than what Nickelodeon attended this to be. Thankfully, it was well-paced with no real dull moments found. I’m surprised to say there were some consistent laughs early on where it contains that self-aware humor that works. Like in the beginning when Dora talking directly to the camera asking the audience if they know and if we can say this thing since she just told us about it. Those kinds of self-aware jokes get me. At its core, it delivers a good message to teach kids about not judging those who come from another part of the world, alongside teamwork.

Certain elements of the source material are easy to spot, especially for those who watched the series while growing up. Having Boots by Dora’s side when he arrives in the jungle is a guarantee, even if he’s not wearing his red boots. But there’s also Swiper (voiced by Benicio del Toro. Yep), the sneaky fox that tries to swipe things. I’m still baffled on how they got del Toro in this. They even made a good point of why the fox needs to wear a mask. Truth be told, I always wondered the same thing.

But what didn’t work about Dora and the Lost City of Gold? Well, there are a few problems I was bothered with, to be honest. For starters, from watching the third act unfold, it was pretty oblivious that it’s trying too hard to be like Indiana Jones and The Last Crusade and some of the Uncharted games that came off a bit familiar. While most of the humor surprisingly worked during the first act, then comes the lame poop and fart jokes that are just aimed for the younger children that either go on for too long or just weren’t funny to begin with. Is not this going to be regarded as a classic, by all means, yet I didn’t hate myself after it was over.

Did Dora and the Lost City of Gold need to exist? No. Though most jokes are aimed for its target audience and it borrows elements from better movies, it’s an easy watch just for its self-aware humor and Moner’s performance. Back when this came out, I was ready to hate this and be too hard with this review, but what can I say except it’s watchable for families to get out it.  We now must see either a Blue’s Clues or Gullah Gullah Island movie that takes this direction and makes it better. If you were on defense about this first hearing about, I’d say it’s worth a rental.