I wasn’t originally planning on seeing Playing with Fire, Paramount Pictures and Nickelodeon Movies’ latest family comedy, because the trailer very much so showed that this would be for little kids and not for adults. But out of my stupidity, I had to fight back regret paying $5 just to see if it was worth sitting through 96 minutes of hilarity. But has anybody even knew this was coming out? Apparently not.

What’s the Story: Fire Station Superintendent Jake Carson (John Cena) and his team of smokejumpers are task to watch over three siblings (Deadpool‘s Brianna Hildebrand, Christian Convery, and Finley Rose Slater) after rescuing them from a cabin fire and until their parents come to get them from their station. And with them, you know lots of hijinks will ensue. 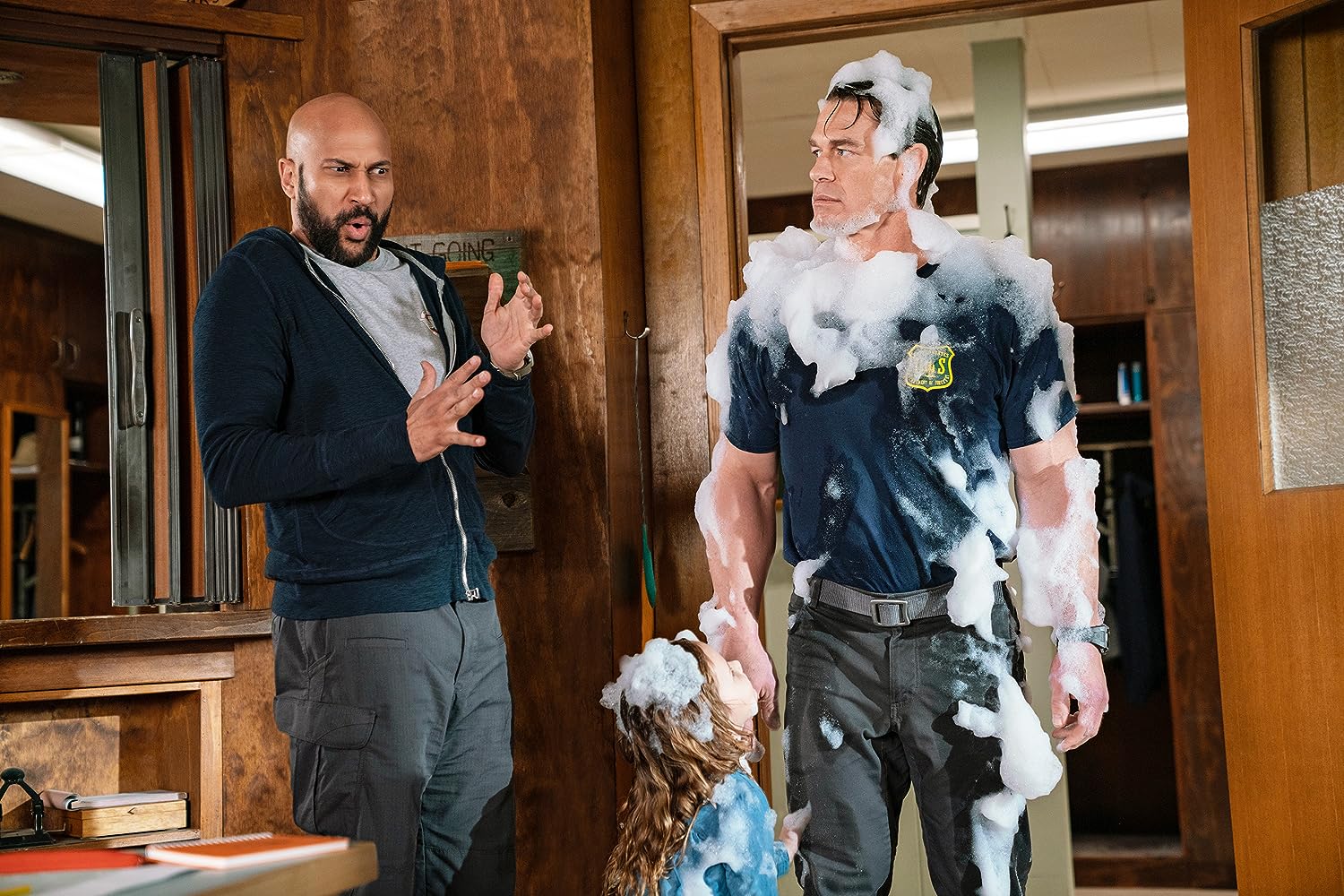 Do you know what happens in the movie? Then there’s no point in seeing it since it’s 100% predictable. If you take a quick look at Andy Fickman’s resume of film, you can easily see that he’s a director that hasn’t made one good movie in his career, which includes The Game Plan, Parental Guidance, and Paul Blart: Mall Cop 2. I didn’t even like The Game Plan back then, and I was only 11. With that being said, was there any surprise to learn that this is perhaps the biggest contender for the worst movie of 2019?

You look at the poster and just know it’s for a certain target demographic. But for me, I knew from the premise and knowing Cena was the main star. I never understood why huge action stars must star in kids’ movies to get more attention from the younger crowd. Because we had Hulk Hogan be in “classics” like Mr. Nanny and Suburban Commando, Dwayne Johnson had Tooth Fairy, Dave Bautista has the upcoming My Spy, and Vin Diesel had The Pacifier back in 2005. After seeing Playing with Fire, this perfectly makes The Pacifier look like an Oscar-winning movie.

There’s nothing special about the performance, and the look of their faces the entire time can tell that they deserve better than being in this. Cena plays the character that you already know will evolve from a huge smokejumper that has zero tolerance for fun or kids to eventually caring about them near the end of the second act. Is it worse than his action movie phase? Close. We’ve seen that Cena can be funny before in other comedic roles. For example, he surprised many people when he showed some chops in last year’s Blockers, which I love. Normally, Keegan-Michael Key is always hilarious, but this is probably the first time I thought a character he’s playing was annoying.

But it’s not just them. You also feel bad for John Leguizamo, Judy Greer, and even freakin’ Dennis Haysbert for showing up in this and are given nothing worthy to work with. Seriously, why would someone talented like Judy Greer be in this giant mess? To give Cena a love interest that ends the way you think?

I think when a family movie relies heavily on tons of slapstick humor and poop jokes, a funny comedy it doesn’t make. Every single joke falls flat to the ground and keeps going till it reaches the depths of hell. This is a laugh-free comedy. There were some people in my audience that laughed, but I was sitting there feeling like a lifeless zombie hearing all these boring repeated jokes like Leguizamo’s shtick, which is misquoting a lot of sayings, and it wasn’t funny the first five times. Plus, the countless references and product placement from My Little Pony: Friendship is Magic made me appreciate the fact that I will never be a brony.

There’s even a five-minute gag about trying to change the little sister after she made a “boom-boom” and Cena and Key are gagging to near death. Because that’s what kids think is funny. The only time the movie got me to smirk was due to Tyler Mane, who plays Axe, and you know what he always carries?

Fickman and writers Dan Ewen and Matt Lieberman never make this anything special as it just looks like a made-for-TV movie that should’ve been on Nickelodeon and not in the theater, especially considering how atrocious the writing is. But was there any heartwarming moments that worked? Some might think, but I couldn’t care less since I didn’t care about any of these characters one bit. But you want to do how much I dislike this? I got up and left during the mid-credit bloopers because I highly doubt those will make me laugh.

Is this something to take your kids to? Nope. The best idea is to just wait to spend your money on much better family entertainment to have fun with. Or better yet, don’t waste your time on this and rent Instant Family, because that is so much better in the humor and heart department.

Sometimes you hate yourself to not only watch a horrible comedy but a horrible comedy that’s aimed at a young audience. I know Playing with Fire wasn’t meant for me, but it should’ve at least tried to be good. This is one of those family comedies that makes you feel dead inside as you sit through it entirely. When everything about it is painfully unfunny and makes you feel embarrassed for the stars, you know it’s destined to be a massive stinkpile.

One thought on “‘Playing with Fire’ // Film Review: Don’t Take Your Family, Please”