Dark Phoenix is said to be the last movie in the X-Men franchise from Fox. Though I haven’t been impressed with the marketing, I’m still very curious to see if this turns out to be a surprise. It shouldn’t be strange to figure out that this franchise has gone through its ups-and-downs for over 19 years.

With the latest being released this weekend, it’s about time to finally give proper ranking for all of the theatrically released X-Men movies from worst to best, in my opinion, of course.

Even after ten years since its release, X-Men Origins: Wolverine is still considered the worst X-Men movie yet, and I couldn’t agree more. This standalone movie about how Wolverine got his powers was a gigantic mess when you can see this was due to the bad script or with studio interference. None of the action was constructed well, the story feels convoluted to understand, and what is seriously up with those awful CGI claws?!

Aside from the opening credit sequence (where it should’ve been the entire movie) the good performance from Hugh Jackman and Liev Schreiber, director Gavin Hood couldn’t save this trainwreck from even being decent. This also contains the despicable decision of actually sewing Deadpool’s mouth shut.

Bryan Singer wasn’t able to direct the third film since he was helming Superman Returns, so they hired Brett Ratner to take over X-Men: The Last Stand, and what a way to completely ruin the franchise at this point. Even when I first saw it (didn’t see it in theaters but got the DVD for Christmas that year), I didn’t even like where it was going. Do I consider X-Men: The Last Stand to be one of the worst superhero movies out there? Not really. Some of the positives that can be said about the movie are that the plot of a cure for mutants is interesting enough, and the performances including Hugh Jackman and Kelsey Grammer as Beast (perfect casting) are good.

But this was the first attempt at telling the popular “Dark Phoenix saga”, and it failed to be remotely compelling. Not only that, but the changes weren’t working for me, which messes up the continuity for the rest of the franchise at that point. 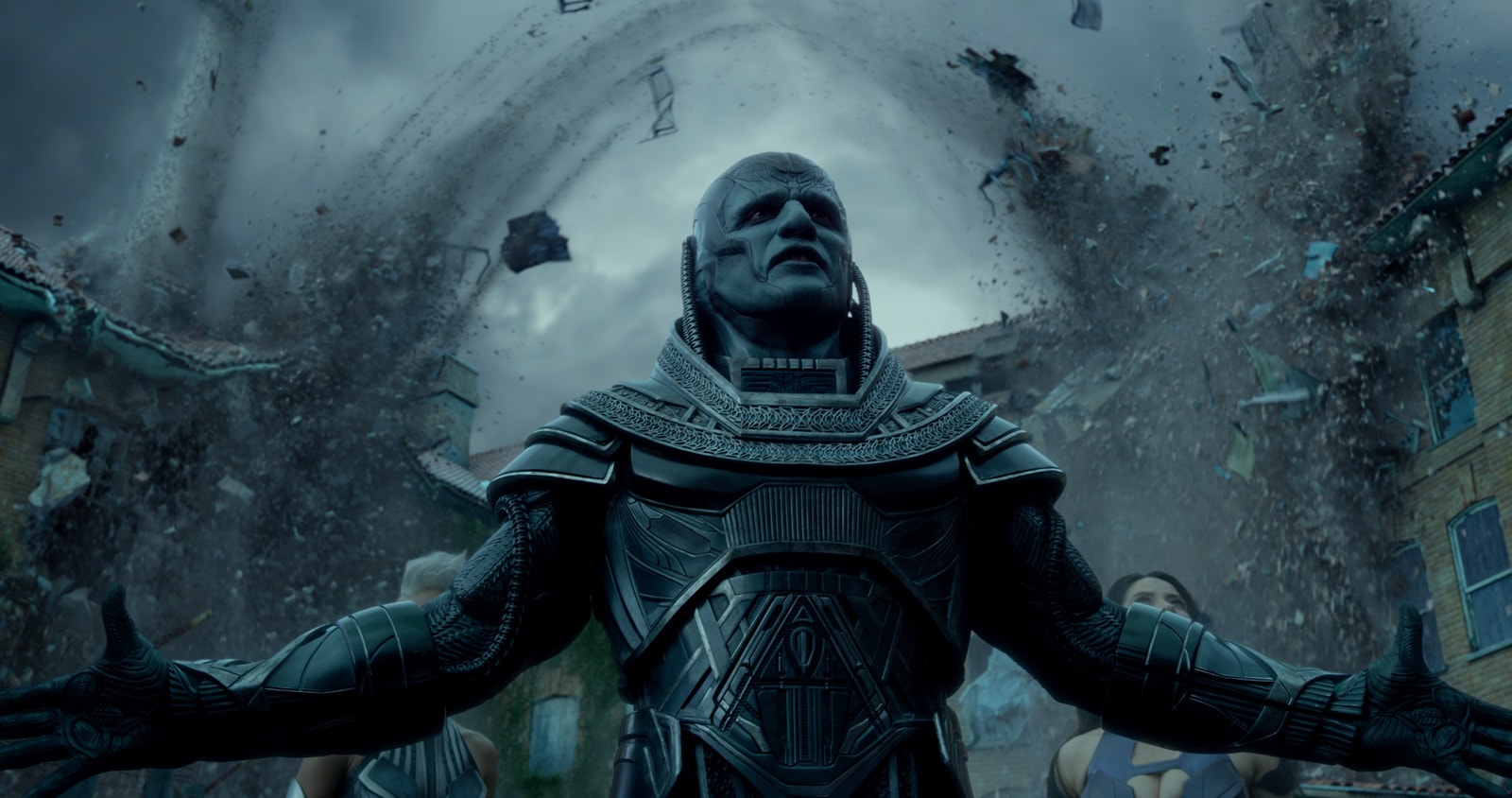 When I first saw X-Men: Apocalypse back in 2016, I knew it wasn’t a great follow-up to Days of Future Past since it was pretty flawed, but I was able to still have fun with the ninth installment in the series. But remembering it three years later, I come to terms that it’s not all that good. Why X-Men: Apocalypse becomes little more than be average is that it lacks any true excitement during most of its action. It also doesn’t help when Oscar Issac’s Apocalypse is a flat villain when all he does it give speeches.

There were two great scenes throughout this: 1) Magneto in the forest after what happened to his daughter. 2) Quicksilver’s saving everybody from Xavier’s school, which is just impressive how they shot it.

When the original Deadpool was a massive box office hit and critics and fans loved it, it would be crazy for Fox to not give Deadpool 2 the green light. Two years later, it managed to be another clever take on the “Merch with a Mouth”. Even though it’s not as great as its predecessor when it has more issues, director David Leitch was capable of making Deadpool 2 on a bigger budget and Ryan Reynolds bringing the energy towards the character. Also, the additions of Cable (Josh Brolin) and Domino (Zazie Beets) was a smart enough choice to make it a home run in for fans.

I will say the “Super Duper Cut” kind of changed my thoughts on Deadpool 2 and lowered my grade a bit lower, but it’s still fun to watch. And I didn’t see Once Upon a Deadpool because it sounded like a waste of time.

After Origins: Wolverine turned out to be a massive dud, it was impossible for fans to get excited about a second try cracking a good standalone Wolverine movie. As it turns out, The Wolverine wasn’t bad at all. I even remember this being the best comic book movie of 2013.

James Mangold’s first try with the titular character definitely has better action sequences (bullet train sequence) and gives a glimpse at what’s to come in Logan. Taking the story to Japan where we get to see Wolverine become himself again while not being able to heal like he used to makes to an entertaining entry in the franchise. It would’ve been great if it wasn’t for the third act with Silver Samurai that came off the rails.

Some say Blade revamped the genre and marked the beginning of studios wanting to adapt any comic book studios could get their hands on, but I would argue 2000’s X-Men started it all. As this was the start of a franchise that became popular with some of its stars, it showed that it’s possible for certain directors to translate a comic series, or cartoon series, into something great.

In a way that Bryan Singer and writer David Hayter realized to make this be a success, X-Men worked fully when being an origin story for our favorite heroes and being able to tackle how the world is filled with mutants, and people are against them. Haven’t re-watched in a long time, but I still remember having a blast watching it when it was on TV.

It was considered a risk to make a Deadpool movie after his botched appearance in Origins: Wolverine and Ryan Reynolds have been wanting to get to project off the ground for years. And it shows that Fox can make an R-rated superhero movie and people will go out of their way to see it. Including myself. In other words, Deadpool is killer.

Ryan Reynolds was pitch perfect as Wade Wilson/ Deadpool, and you just can’t see anyone else in the role. Its action/comedy tone fits well in the X-Men universe to the point where it didn’t become distracting. Thanks to Tim Miller’s fast-paced direction and a hilarious, meta screenplay, it’s an absolute win. Deadpool is still one of 2016’s best movies and the second best comic book movie of the year behind Captain America: Civil War.

Who would’ve thought that Logan was going to be the first comic book movie to be nominated for an Academy Award for Best Original Screenplay? Certainly not me, but it was well deserved. Logan was such a different movie that takes place in the same universe. James Mangold’s second take on the hero goes for that R-rating fans has been wanting for years, and what we got is a deep, brutal tale about a mutant getting older that’s unforgettable.

Settling on a tone that’s gritty and profound for a superhero that doesn’t feel like one, this feels like a true adaptation of the “Old Man Logan” comic. Great performances from Jackman, Patrick Stewart in his best performance as Charles Xavier, and Dafen Keen as X-23 and some bloody action that can only belong in here. Logan is one to remember, and it was a bittersweet send-off for Jackman’s on-going character. Who didn’t cry at the end?

Have to post the first trailer because it’s still one of the best ever made!

As I mentioned X-Men: First Class in my post about Movies That Turned Out To Be Surprises, I wasn’t excited about this due to the fact we just came off of two that were garbage. I never realized director Matthew Vaughn was able to make a prequel that sounded uninteresting from the beginning and turn it into an amazing one at best.

This brought new life into the franchise nobody thought it would be. Each time I watch it, it gets even better. If X-Men: First Class didn’t give its viewing audience performances from James McAvoy and Michael Fassbender as a young Professor X and Magneto, respectively, spectacular action, this probably would’ve been forgettable if you ask me. Also, Jackman’s quick cameo is hands down the best cameos I’ve ever seen.

If I could go back in time and told my six going on seven-year-old self something, I would tell him to see X2: X-Men United instead of The Lizzie McGuire Movie opening day because he would experience greatness unfolding. Bryan Singer perfectly handled the duties of making a follow-up that completely outshines its predecessor in the great fashion.

Bryan Singer’s return to the franchise was something that was definitely needed when it came to X-Men: Days of Future Past, which I believe is the best film in the entire series. The combination of the original cast and the First Class cast could’ve been a mistake and would make everything already complicated, and yet, it was both a fantastic time travel movie and a comic book movie at the same time.

Bringing the fan favorite comic probably wasn’t going to be easy for those who know a lot about it, but it turns out to be fantastic the entire time. But one of the reasons why I love DOFP is that it basically erased the mistakes of the previous movies to create a new timeline, even though the continuity still feels like a mess.

Right down to the performances, the stellar action (Quicksilver’s awesome moment), and bringing everything, X-Men: Days of Future Past is my favorite film in the series to date.