Starting a family is something I want to happen in the near future. But I always wanted to a vision of how raising kids would be like, too. This also meant to everybody who has ever been tried from parenthood and wondered how it’s acted out in good fashion. Director Jason Reitman’s newest comedy-drama Tully made me respects mothers even more for what it took to raise their kids, especially on Mother’s Day.

What’s the Story?: Marlo (Charlize Theron), a mother of three, is gifted a night nanny by her rich brother Craig (Mark Duplass). Her husband Drew (Ron Livingston) is busy working and having a job around the house and her two kids that are becoming a hassle to deal with, especially her son who has special needs and labeled”quirky” by the other adults. Hesitant to get onboard with this idea at first, Marlo comes to form a unique bond with the thoughtful, surprising, and sometimes challenging 26-year-old nanny named Tully (Mackenzie Davis, Halt and Catch Fire).

Personally, Reitman is a talented director when the right project comes to him. Juno and Up in the Air are my favorites from him that took me by surprise. Which is why the optimism was there with Tully coming out. This is also his third collaboration with writer Diablo Cody, which she won an Oscar for Best Original Screenplay for Juno. And the second with Reitman, Cody, and Theron with Young Adult, which was just alright, in my opinion. From watching the trailers from this, knowing about what the plot was about might feel stressful, but Tully is the perfect movie for any parent, although it isn’t for everyone.

Cody’s script handled the portrayal of motherhood to an honest degree. Nothing about the film felt forced with its balance of comedy and dramatic moments that genuinely worked in the film’s favor. Some of the dialogue sounded like it came from Cody’s mouth and it’s the best script she’s done since Juno. The bond between Marlo and Tully was insightful and explores some development for the characters. This didn’t turn into a cliche where Tully turns out to be evil and wants the kid to herself, as it has been done in bad stalker flicks; she’s actually a pretty cool chick who knows how to take care of others when the time’s needed.

Theron has become one of the favorite actresses anytime she’s in any form of genre. Playing the stressed-out mother who just wants to find to come back to reality at some point was the perfect fit since he’s a mother of two. Her role is pretty common with mothers who might feel depressed after having a child, and it’s no different here. A role that was honestly could land her a Best Actress nomination. I haven’t seen Davis in a lot of roles, but she really handled her own as the titular character. There was some kind of calming charm to her that makes you want to have a conversation about life itself. Their chemistry was excellent and it turned to become a blissful relationship between the two.

The story’s accurate portrayal will go on to telling how parents will go through life with their family, even when it’s uncommon. Most kids are acted differently than others, or not really raised that carefully about how to teach their homework when it gets difficult. A certain time will come to people who will become parents, and the aspects of their lives will change for better or worse. Parents will have a period of time where it’s a stressful and at the verge of a breakdown at first, but everything will hopefully push forward to new incredible possibilities to come with your loved ones. 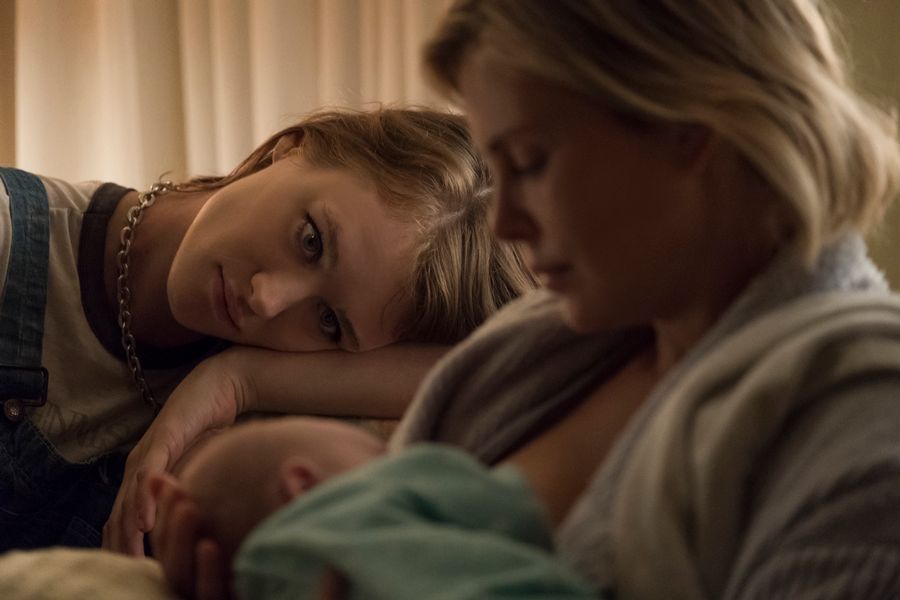 Some minor problems that the film has on its hands are that the last act kind of has a slow pace. And something’s revealed later on in the film that was unpredictable and I’m still conflicted in the way it was handled and I can tell that not everybody will like it. After thinking about it hours after it was over, it’s still mixed overall.

For someone who hasn’t started a family or have children yet, Tully is surprisingly relatable from a man’s perspective. Nothing was really moving or made me emotional, but it doesn’t take away that this is still an enjoyable watch. It’s probably Reitman’s third best film he’s directed. And even for a small indie movie with recognizable names attached, this shouldn’t be a movie that should be slept on for the year.

Tully takes an almost realistic look at the struggles of motherhood in a way that didn’t seem forced. Solid performance from Charlize Theron and a screenplay that blended humor and drama perfectly. Grade: B