For a movie like Bright to premiere on Netflix is getting pretty high standards for a fantasy that looks like it’s aiming for a blockbuster is Netflix’s most expensive movie to date with it costing $90 million. But do you know the best thing about watching Bright? The fact that it’s free instead of paying theater prices for this.

Set in an alternate present-day where orcs, elves and fairies, two L.A.P.D. cops from Ward (Will Smith), a human, and Jakoby (Joel Edgerton), an orc, embark on a routine night patrol that must have them work together to protect a young female elf with a magic wand to be guardian from the wrong hands. 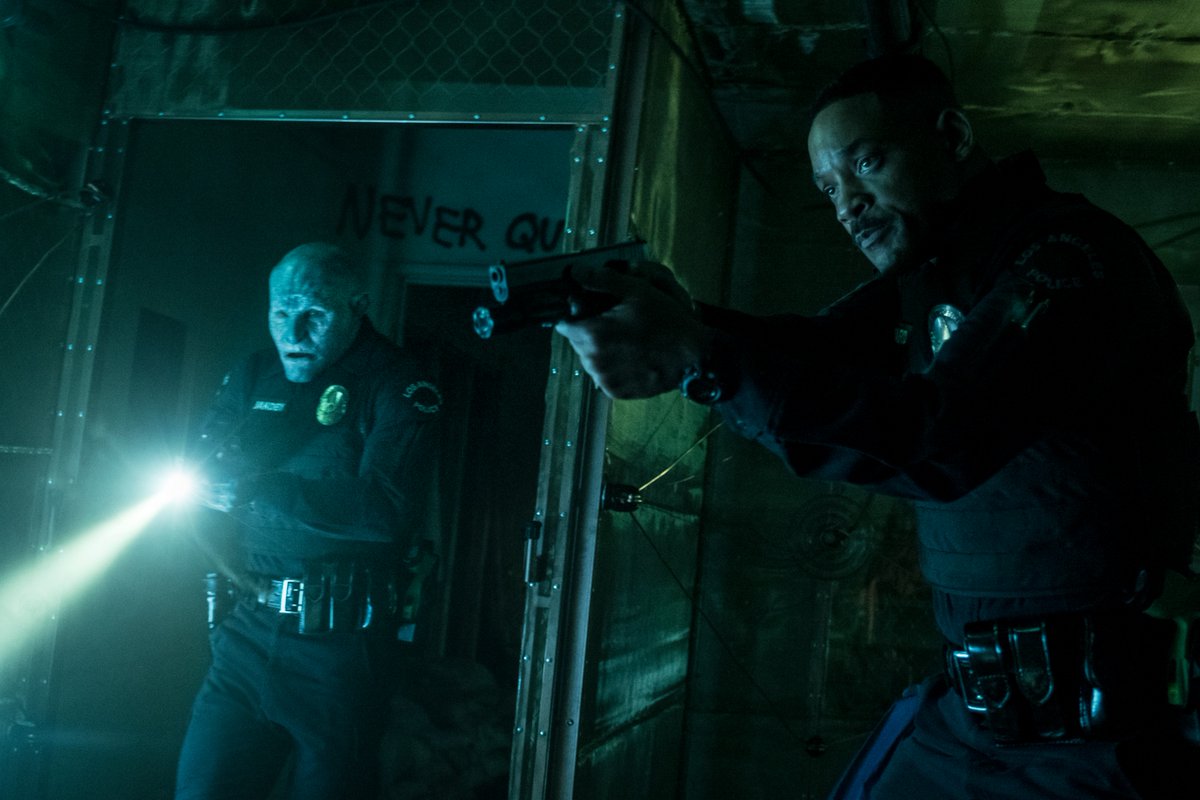 While this didn’t look good at all from the synopsis and the trailers, at least this is an original fantasy that could eventually catch my attention. But the people behind the movie wasn’t what made me excited based on the fact this is director David Ayer next film after the massive disappointment Suicide Squad and writer Max Landis (Chronicle, Dirk Gently’s Holistic Detective Agency) has a weird mind that says things that make me want to punch him. This made me think of Bad Boys, Alien Nation, Lord of the Rings and End of Watch (Ayer’s best movie) altogether. And by the end of it, Bright was still pretty bad.

As much as a huge fan of both Smith and Edgerton, they just didn’t have any chemistry between them. Yes, they’re both cops who don’t like each other pairing with each other, but the script should definitely have a good relationship with them. Instead, it came off as the odd couple. The positive side about this is that the leads are at least trying with the material that’s given to them. Smith tries to bring some charisma, even though I didn’t exactly like his character that much.

Ayer’s direction of the action has no fun to be found anywhere with no style in his version of Los Angeles. He tries again to make this a gritty looking cop drama but doesn’t really do anything put effort into capturing that. Ayer does have the free range to do whatever he wants now since Suicide Squad was ruined by studio interference. As the action scenes go down, especially the shootouts, there’s nothing special about any of them. Nothing about this movie pokes fun at itself and takes itself seriously without any context. The two-hour film went on way too long because the structure doesn’t pull through.

Landis’ script was just terrible with him trying to tackle all this social commentary/racism, police brutalities, etc. that’s supposed to be related to the real world. The film treats the Orcs as the lower-class in this universe as to everybody hates them. Even the other Orcs doesn’t like the fact the Jabosby is a cop which leads to discrimination. It’s cool to explore racism in movies, but at least make it believable or seriously. Even the backstory about how this world came to be is mentioned quickly and is easily forgotten. The attempts of humor are so dismissal not knowing if something’s supposed to be funny or not. And I should’ve been concerned about swearing nowadays, but there are a lot of unnecessary f-bombs in here in almost every scene. Like, they could’ve toned it down for ten minutes.

The practical makeup effects are subpar at best. But if this gets nominated for an Oscar for Best Makeup and Hairstyling, they should get rid of that category since they nominated crappy movies (*cough* Suicide Squad *cough*).

In the end, Bright had a lot of potential, and it wasn’t executed in the right way to make this an enjoyable Netflix original movie. I did want to like this on the fact that there are good actors in this and has an interesting fantasy premise. It’s just that it turned itself into a mess. This barely cracked my worst list of the year, but it just missed it by that much. They already announced that a sequel is about to happen, which just proves that terrible movies get a follow-up than good movies that haven’t gotten a sequel yet.

Bright doesn’t exceed in blending the fantasy and the cop genres perfectly with its weak writing, direction and lack of chemistry between the leads.

One thought on “Bright Review”