“If there’s something strange in your neighbor, who you gonna call?” Not everybody. Because unlike some people giving this a chance, it seemed like nobody liked the idea of a Ghostbusters reboot with a female cast right from the start. The fact that people complain about before even watching it is dumb. It’s common but this is too far, in my opinion. People thought the first teaser was the worst trailer ever made and almost everybody has turned off on this instantly. I 82 percent disagree with that. Has nobody watched the Jem and the Holograms trailer? Honest question because that trailer was much worse.

But this was on my most anticipated list of the year because the original 1984 classic is one of the funniest comedies ever made. And I’ll admit, the marketing for this wasn’t on its A-game either as it was quite terrible. This is the movie that will make those people question about themselves for being wrong. ‘Cause Ghostbusters turned out to be a solid movie. Not perfect, but enjoyable. 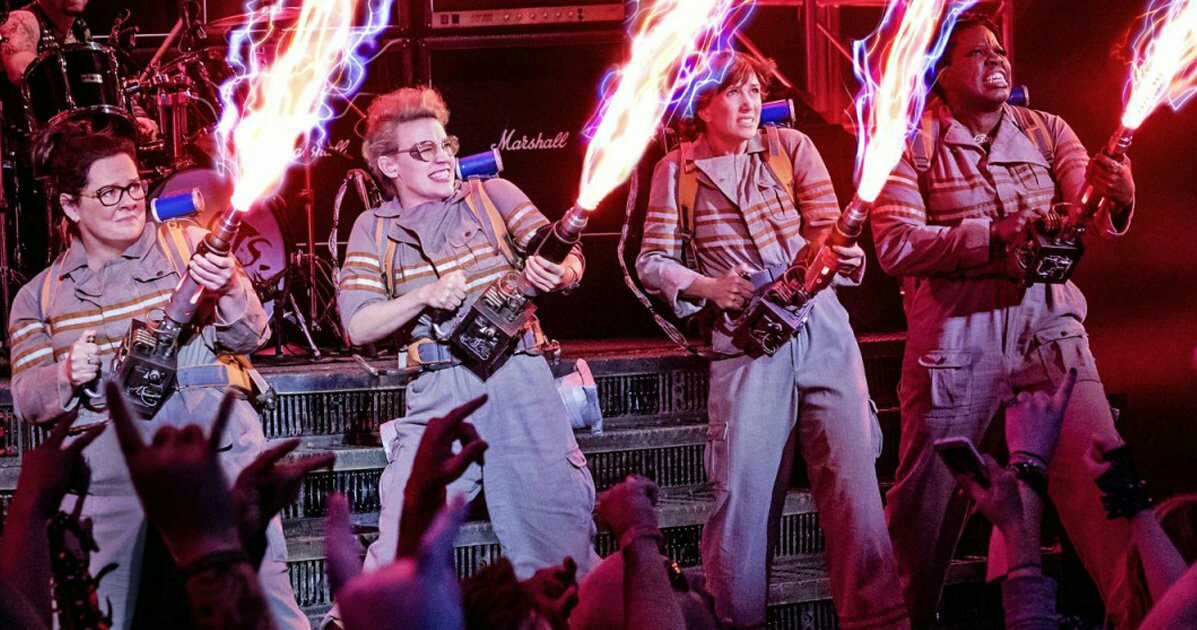 Proof positive that a trailer that’s terrible can equal a good movie just the last few movies from Paul Feig. Speaking of the director, Feig (Bridesmaids, The Heat, Spy) did an excellent job of having a new team of Ghostbusters while not trying to rely on the original by making it a bit scarier and having a new story to maybe lead on.

Plus he’s really great at directing women in lead roles much like his previous work. And it feels so much like a Feig movie that he’s doing. The dynamic teamwork between Kristen Wiig, Melissa McCarthy, Leslie Jones and Kate McKinnon worked so well together and also having solid laughs especially Jones, who stole the entire movie. And to the haters out there, yes, women can be funny. And Chris Hemsworth was funny as the mindless receptionist enough though he plays a dumb character. While the joke goes on a bit long, he was still funny. Some of the CGI looked pretty good as it’s presented with some colorful effects and the action sequences were fun and enjoyable watch them use their proton packs.

This isn’t a perfect movie and it’s not one of the best movie of the year by any stretch of the imagination, but it suffers from lots of issues that aren’t far from between from being flawless. The first 20 minutes were really questionable of how this will really be funny, the villain was bad and weak to where we don’t understand its purpose of being there, the cameos were out of place and felt forced as it could’ve been handled a lot better, and some elements of the third act were a bit weak as well. But besides those negatives, it did turn out to be a surprisingly good reboot.

Safe to say “I’m shocked it didn’t suck.” With it now being released, this movie absolutely doesn’t deserve this stupid controversy spreading around with anybody hating on this before it even came out. And I do mean “stupid controversy”. Nearly nobody is giving this movie a chance to actually be decent, and just hating on to no apparent reason whatsoever. Even people who haven’t seen it yet is hating just to be dicks. Because I feel like it’s not that it’s not just the studio’s fault for how they were marketing this, but it’s the online trolls cause this ridiculous stir.

Have we all forgotten that this is all fiction and not real? If this happens to be about hating on women for ruining your childhood or just the fact you’re hating on a dumb trailer, then you should enjoy unfunny comedies like Hot Pursuit. And actually see it for yourselves and quit whining like a baby and boycott it. Everybody still has the original to watch and don’t compare it just like it happened with Jurassic World. It needs to stand on its own.  But lets me say if, this was a continuation of the universe of the first two movies, maybe it could be a lot better to be completely honest.

We still have the original Ghostbusters so just watch that so a lot of people needs to stop complaining that this is a bad idea. It’s reality. Deal with it. And don’t compare this to Pixels, idiots. Because this is 100 times better than “that” attempt at comedy. I even prefer this over Ghostbusters II as that was a mishap that felt like the exact same first movie. If anything should be hated about this, it should be the remixed theme song by Fall Out Boy. Ugh! It’s likely that this will be a surprise for most people who were turned off by the trailer at first. At least I was giving this a chance, to begin with.

Ghostbusters wasn’t the disaster like everybody wanted it to be. Even though it’s not the greatest remake to ever happen, it’s still a funny reboot at best that’s totally fun, entertaining, and humorous.