There’s always one lesson I’ve always remembered whenever I watch Collateral: Never become a taxi driver, and that means any company where it involves me driving around passengers, especially at night. Because you never know what will happen to you, and you might end up in the same situation of what was going down throughout its entire two-hour runtime. What would you do if you don’t know how to cooperate with someone taking you hostage in a cab? There’s something to think about.

What’s the Story: Max Durocher (Jamie Foxx) is a temporary cab driver in Los Angeles who wants to start his own private limo company. He picks up a customer, Vincent (Tom Cruise), and offers him $600 to keep driving him around to five different stops around all night, but what Max finds out about him is that he’s a contract hitman and each stop at the locations of a target. What should’ve been a normal, boring night making rounds turns into one of the dangerous nights of Max’s life when he becomes a hostage in Vincent’s care. 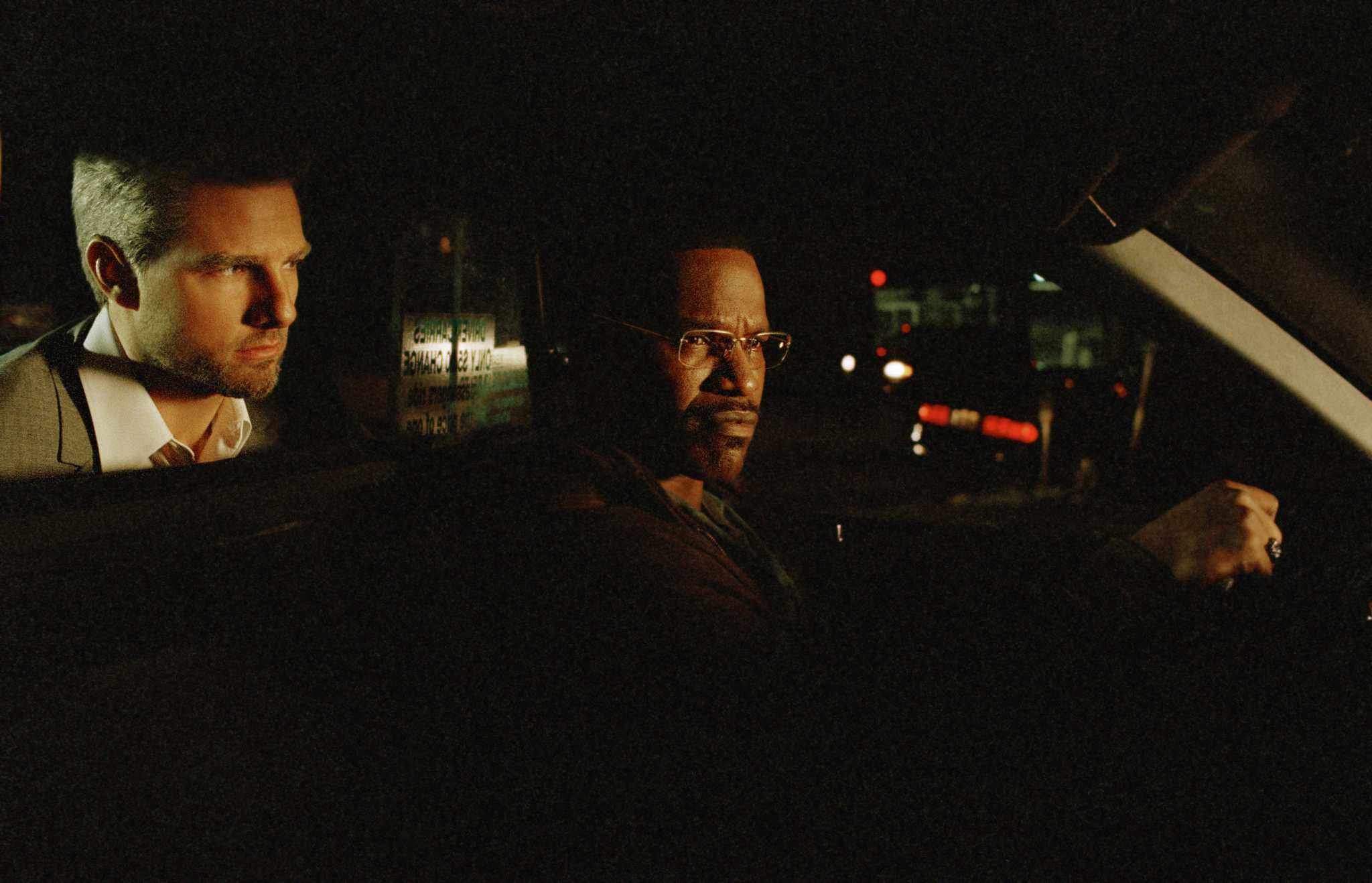 Since I wasn’t old enough to see R-rated movies in theaters when I was right-years-old, I always remember looking at the poster and trailers for Collateral, thinking it could appeal to me. It took me a long time to watch it, even though I had the DVD. I heard so much about it over the years, and since I’m very fond of its two main leads, it was one of those random watches to finally see what’s all the talk is going on with this. Right as it was over and it cut to credits, I knew I stumbled upon something truly brilliant. Collateral is another one of my favorite films of all-time where there’s never a disappointing aspect of it.

Seeing none of director Michael Mann’s other films in his filmography before this, this is among his best efforts, right up there with Heat and The Insider. Honestly, I was expecting this to be a straightforward action movie, but it’s very much so a thriller in the best way. Mann knows how to build suspense correctly when you’re not sure of how Vincent will handle some situations. This is a gorgeous-looking drama at what nightlife in L.A. looks like from the perspective of someone who works at night, and it makes for a unique way of seeing the city we haven’t noticed before, almost like a character itself. The only time I’ve ever visited the city was only a couple years back, which I want to go back to so bad, but I’ve never seen it look this slick, and that’s in large part to the Dion Beebe and Paul Cameron’s digital cinematography, the first major studio movie to use digital cameras (the Viper FilmStream High-Definition Camera). If the setting took place in New York City or anywhere else, you wouldn’t get the same effect, so it’s hard to see this take place in another city.

The screenplay by Stuart Beattie, or whoever wrote it, is the kind of original writing that doesn’t get much attention nowadays. For those who had the decision to walk into this blind without knowing a single detail about this, they would not understand what you’ve signed up for, just like with Max with Vincent takes his fare. There’s just something about every moment of dialogue between the two of them in the cab that’s investing to learn about them regarding their personal lives. Never once were the exchanges between them boring; it’s made me wonder if I could write something that great. Seeing how we don’t know about Vincent and what he does until the first stop was a good decision because I liked how we don’t see some five-minute opening where doesn’t become much of a mystery.

Because Max is questioning why Vincent is going out of his way killing people he doesn’t even know who, while Vincent is talking about him about why he’s still stuck driving a cab for 12 years when he could live it out somewhere else making his dream come true. One of my favorite lines was when the first target falls onto Max’s car from the window with him saying to Vincent, “You killed him?” To which he replied, “No, I shot him. Bullets and the fall killed him.”

A premise like this so very simple where it holds reign to why films that take place during a single night has always been awesome because it’s like we’re really following these two characters throughout the night. Does the pacing ever impede things? It doesn’t. Is it executed bold enough for everyone to enjoy? Absolutely. It has a story that felt like a real-life story you hear on the news coming true, and I would’ve bought it completely about a man trying to survive the night. Beattie’s career as a screenwriter afterward has never reached critical success (G.I. Joe: The Rise of Cobra, I, Frankenstein), but it’s an Oscar-worthy script if I’ve seen one.

Without the likes of Tom Cruise and Jamie Foxx, this drama wouldn’t be the same, in my opinion. How different would the film be if they gave the roles to Russell Crowe and Adam Sandler? The most fascinating thing about Max and Vincent are they differ completely from each other, where their professions really don’t mesh with opposite morals, in the kind of situation where you have no clue of what to do in a moment of peace; you always want to know what’s going to happen afterward. Their scenes mostly take place inside the cub where you get that right amount of tension between them, and you feel you’re inside with them.

The performances and chemistry both of them provided are unforgettable. You already know it’s no secret I love Cruise, but his performance as Vincent is the best role he has ever given in his entire career, if not one of the best performances of the year. This wasn’t the first time we’ve seen him play the antagonist as he was already in Interview with the Vampire a decade prior, but everybody has grown accustomed to seeing him play the hero in almost everything. Seeing him play against type for a change was a plus since this was a rare thing we’re seeing. The role of Vincent was different from what we’ve seen from him when this came out, and he completely pulled it off 100% where isn’t a guy to be messed with. It’s unlike anything I’ve seen before. He plays this role so well you start to see him as a villain you love to watch, even when his job is killing people. I even forget it was watching Cruise a few times. Only he can look cool with silver hair, a grey suit, and sunglasses.

And Foxx as Max gives one of the best performances in his career, even a bit better than his Oscar-winning performance in Ray. Despite being known as a comedic actor first starting out and as a musical artist, it’s the role that impressed a ton of people who saw him as this incident man who’s forced to tag along with this hitman. Where he really shined was when he has to be Vincent to get the last two names for the job from Javier Bardem’s Felix, which made him think of what Vincent said to him early on, “We gotta make the best of it. Improvise. Adapt to the environment.” It was like he shed his old skin and became someone else in a split second. The same year he won for Best Actor, Foxx was also deservedly nominated for Best Supporting Actor, talk about a solid year when two of the three movies he was in were major hits.

The action never leaves your mind after it’s over. The most memorable scene in the entire film is the nightclub shootout; it was like breathing again, noticing there aren’t any moments of the camera shaking whenever someone’s getting shot, and it was the perfect location for when everything hits the fan. The first time I saw it, I couldn’t stop thinking about it hours later. The editing and sound design of it all were major standpoints for making that entire sequence work out.

As for the supporting cast, they should also mention. Jada Pinkett Smith as Annie Farrell doesn’t have that much screen time, but she made the best of what to work with when sharing the screen with Foxx. You also got other familiar faces going around like Mark Ruffalo as Detective Fanning, who’s the one trying to connect all the pieces. Peter Berg, one of the few times he’s seen as an actor, as Richard Weidner, and even Jason Statham shows up at the beginning very briefly where he runs into Cruise at the airport, who might have been Frank Martin, his character from The Transporter.

And the music was never an aspect I noticed until watching it again recently, and it adds so much to its surroundings. Whether it’s the score composed by James Newton Howard’s or the infusion of jazz, they threw in it with a seamless effect. This was also the first time I ever heard of “Shadow on the Sun” by Audioslave when it dropped during the two saw the coyote in the street before driving to their next destination. Props to this film for introducing me to the band that’s more deserving of love.

The best film to come out of 2004 that wasn’t nominated for Best Picture is Collateral and has been one of my favorite films of all-time where I can always catch a glimpse of it whenever it’s on. Not only does Michael Mann provided fantastic performances from Cruise and Foxx, respectively, but it has an excellent, unpredictable screenplay, stunning cinematography, and loses no amount of tension. Not only do I consider this an underrated film, but one of the best thrillers in recent memory where it deserves more attention.