Have you ever imagined what it would be like to be the face of a late-night television program? Whether it’s a host from the past or on the air currently, it would be an entertaining job to hold, as long as you’re capable of having fun and keeping up with your appearances. If Late Night was the first movie about the focus of one, that would be shocking if it hasn’t happened yet (If we don’t include The King of Comedy) in bringing some originality into play and how we should treat workplace situations with ease.

What’s the Story:  English comedian Katherine Newbury (Emma Thompson) is one of the most popular late-night talk show hosts over the decades, though it might not be for long since there’s news that they will replace her after the show’s decline in quality and ratings. In order to fix the show to become a hit, they hire the first female staff writer Molly Patel (Mindy Kaling) to bring in some diversity into an all-male writer’s room. Even though she has no experience working in comedy from just being a factory worker, Molly is going to give all she got to help out Katherine in improving her show for the better. 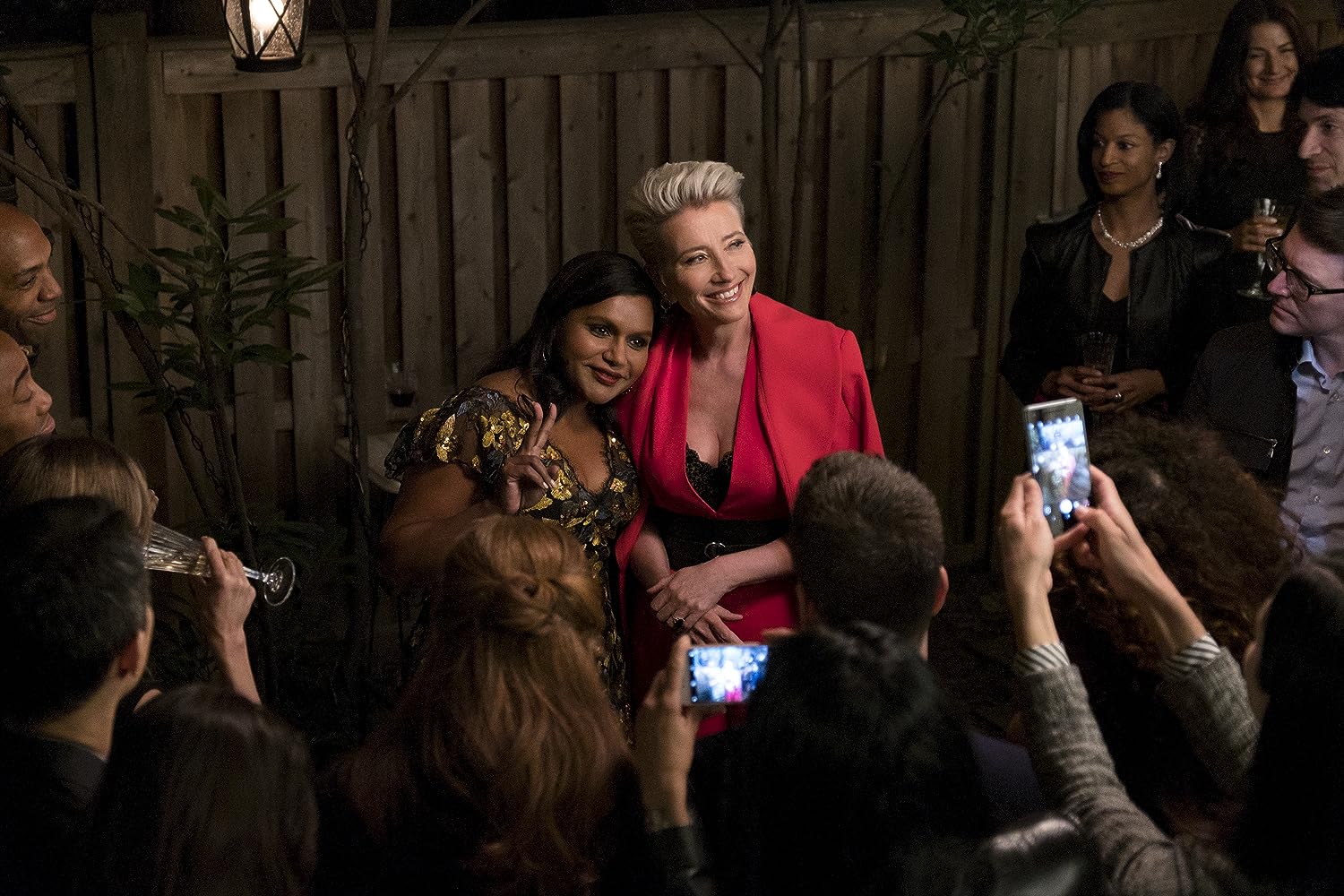 There have been some noteworthy movies that debuted at the 2019 Sundance Film Festival, including Blinded By the Light, Honey Boy, The Farewell, and many others, and knowing that Late Night was one of those that premiered to solid reviews was enough to make me confident in knowing there’s a chance of me enjoying it. This would be an interesting look at how a talk show work behind-the-scenes and how everything comes together before taping a show. I truly envy those who got the chance to see it early because I really liked Late Night.

When it comes to a movie with the likes of Thompson and Kaling in the mix, you’re going to expect both of them to be charming and hilarious with the role they’re given. The chemistry between the two was excellent, and they couldn’t have been better. Being a fan of both of them, Thompson pulls off one of the best performances I’ve seen from her in a while as someone who’s seen as arrogant and commanding, while Kaling’s bubbly personality is perfectly relatable and should have a bigger presence on the big screen.

The rest of the supporting cast also had a hand in keeping the levity of the comedy up with John Lithgow as Katherine’s NYU professor with Parkinson’s disease, Amy Ryan as the VP of the network, Denis O’Hare as Katherine’s staff manager, and Reid Scott, Hugh Dancy (who I honestly didn’t recognize) and Paul Walter Hauser as a few of the writers for the program. 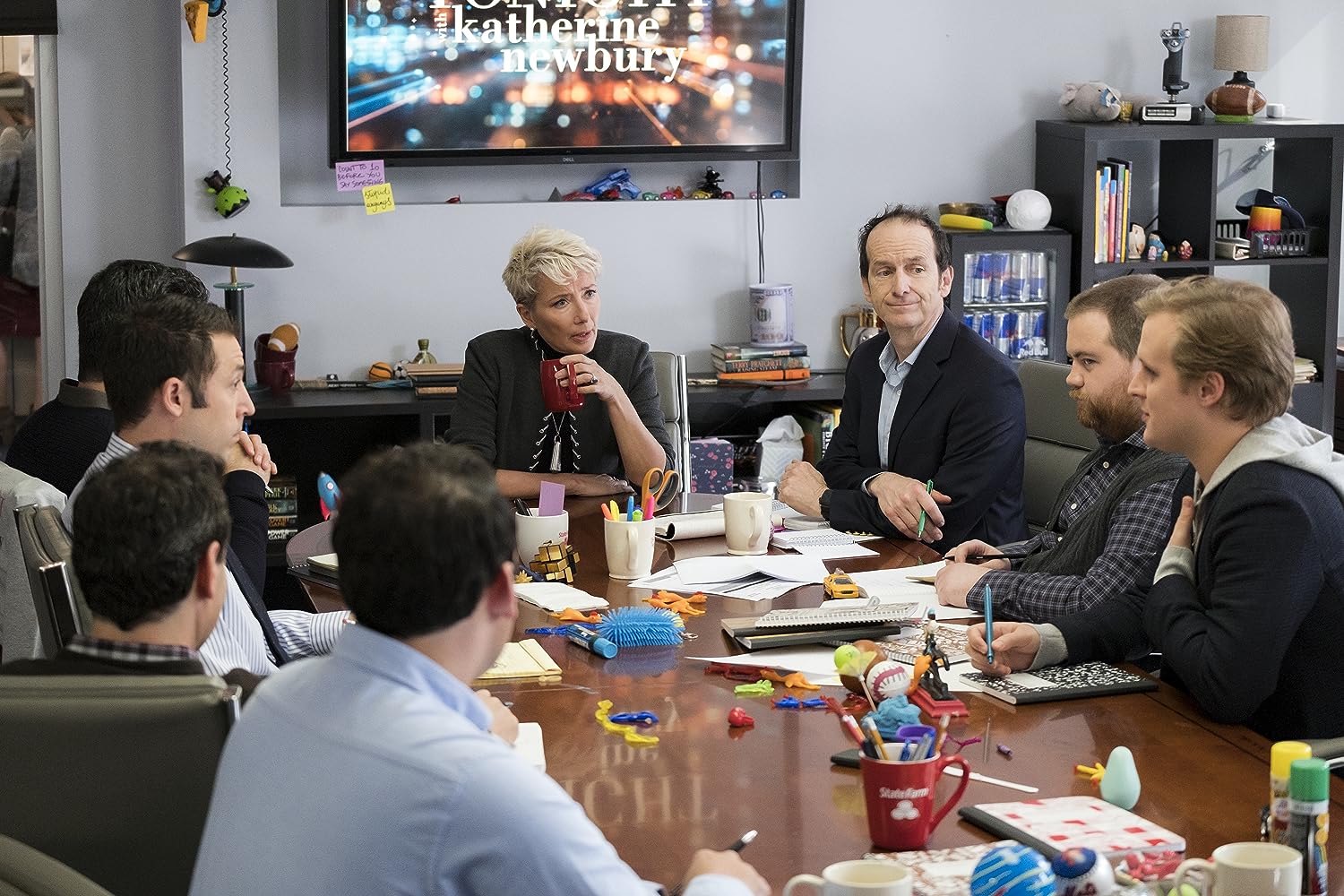 Kaling taking charge of penning the screenplay was one of the reasons I was looking forward to this since she proved to be a funny writer. She didn’t have a smartly written story like this be over-the-top and play out like a sitcom of sorts, but what I appreciated was showing an almost realistic side to comedy writers and doing the best they can without playing it dumb for the audience to understand. Some might go along and compare this to something like The Devil Wears Prada, and I got a little hint of that. But it’s the kind of workplace comedy that I felt was on-par with The Intern, another Anne Hathaway comedy that’s delightful. This was capable of landing its funny and dramatic moments that worked when it needed to take charge in controlling the scene.

Director Nisha Ganatra is primarily known for directing television work, which includes three episodes of Transparent and ten episodes of You Me Her. She will get so much work after this because her skills behind the camera didn’t ruin the natural flow of how the story is pushing forward to its third act. Showing from her perspective of portraying Thompson as the first late-night host in this fictional story shows it’s an aspect that can be described as lacking.

As it stands with the problems I had with the film, it will be easy to point out its predictability, and with a plot like this, you know how everything will wrap up. Besides that, I guess I wanted to know more about Molly’s family and just thought there would be some involvement with her personal life outside of work a bit. So aside from those minor issues, I didn’t expect this to leave me thinking about its social commentary, about how we should take risks in hiring more diverse people around the entertainment industry. This might not be just late-night talk shows, but I can definitely see that there might not be a ton of inclusion in the workplace when there are few people of color or not taking any chances of bringing in people with fresh ideas, not just a “diversity hire.” Trust me when I say some talented people will make differences anywhere. To me, it only takes one person to bring out the best in anything.

With Amazon Studios as the distribution, this should’ve gotten more attention when it came out since I don’t believe there was a huge audience for this when it came out. It stinks that their original movies go straight to Amazon Prime rather than a home release. They’ve released amazing films in the past like Manchester By the Sea, while the only film I can think of that was massively horrible was Life Itself. I feel it’s safe to say I can consider Late Night one of their best outings. Here we have a funny comedy that’s surprisingly important to realize in our society, all coming together with great performances from its lead females.