The reason writer, director, and editor Kevin Smith finally made Jay and Silent Bob Reboot after rumors have been around for years is because after he had his serious heart attack two years back that had fans worrying, he didn’t want his last “possible” movie to be the lackluster Yoga Hosers. Even if this sequel wasn’t the best, I was just glad to see the classic stoner duo after a decade of missing them dearly.

What’s the Story: Jay (Jason Mewes) and his hetero life-mate Silent Bob (Smith) are still living in Leonardo, New Jersey, but not everything goes well for them after they can no longer call themselves that after they signed a document to a film studio their names. Until they realized that they’re rebooting Bluntman and Chronic. So, it’s up to them to go on a mission back to Hollywood to stop the reboot from happening. 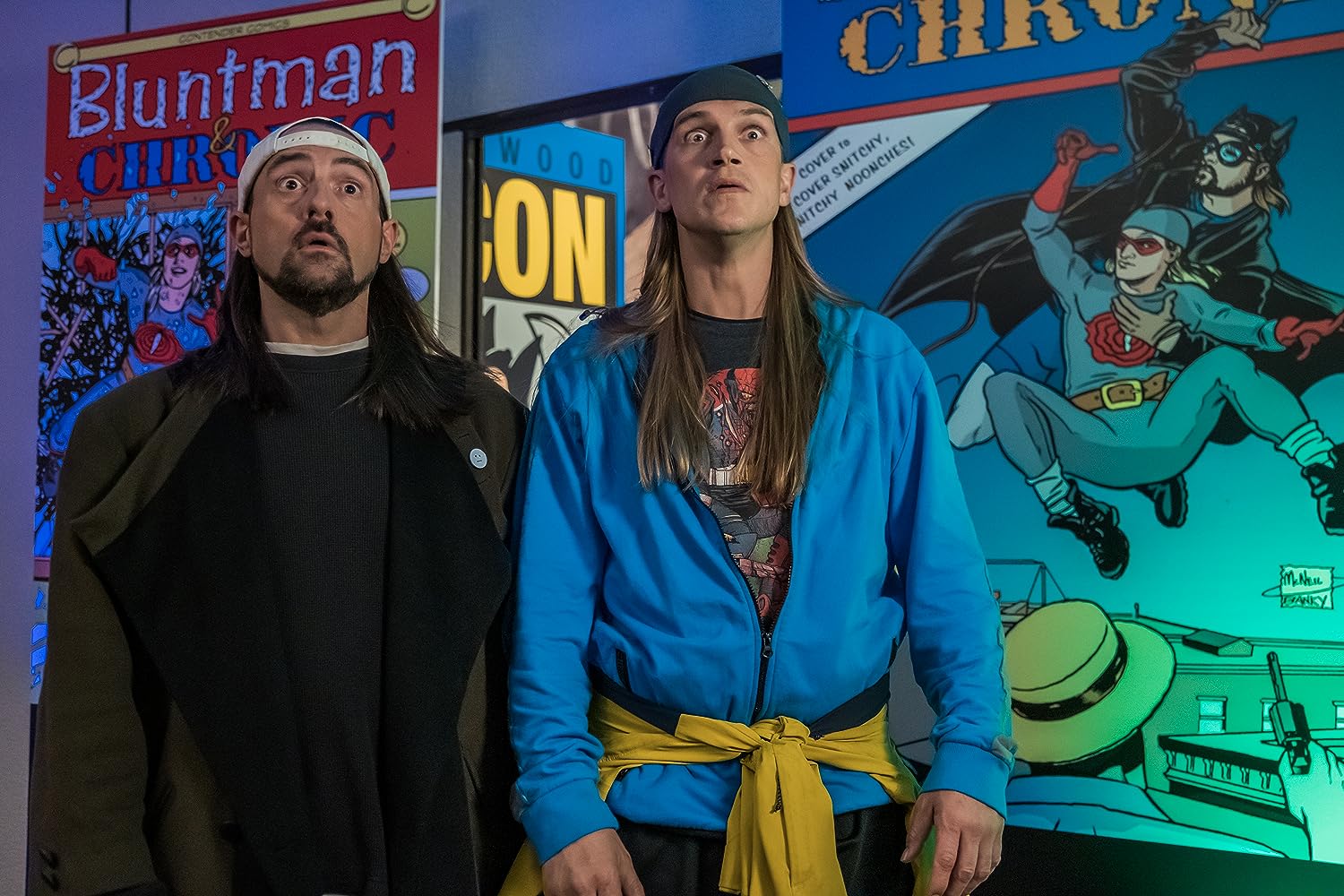 Like many, I’m a fan of Smith’s earlier movies, especially from his View Askewniverse from 1994’s Clerks to 2001’s Jay and Silent Bob Strike Back. And to those wondering, my absolute favorite movie Smith ever did is Chasing Amy. His recent movies haven’t gotten the same responses since nobody didn’t enjoy this True North trilogy thus far and we all want to wipe our minds over Cop Out. Nonetheless, he’s a creative filmmaker that’s style I can latch myself to.

It was a shame Jay and Silent Bob Reboot didn’t get a real theatrical release since I actually love the first movie, despite some jokes feeling outdated now. That’s honestly one of those comedies I can quote well. I would’ve gone to the Fathom Events showing when it came out, but it was sold out and I had an exam the next day.

The best thing about the film is that Smith is literally doing the same movie all over again with new characters and mostly the same situations that the duo got into before. In the first movie, they went to Hollywood to stop the Bluntman and Chronic movie from starting production; now they must stop this reboot from happening. Nearly beat for beat the same but for a new generation. That is becoming one of the biggest problems the entertainment industry is having right now with these pointless sequels, remakes, and reboots nobody asked for.

Seeing Mewes and Smith back as the titular potheads couldn’ve been better with this new adventure they are embarking on. They haven’t changed a bit, except Silent Bob has gone vegan and uses a smartphone as a way to communicate. Jay is still that crude, weed-loving, foul-mouthed dude we grew to love over the past 25 years. Their chemistry is never a failing aspect whenever they share a scene together.

But it got me to laugh throughout, even though there wasn’t that moment that was gut-busting funny. Most of the humor was certain callbacks that I got from the second before it happened. Fans can pick-up on them quickly.

Along the way, we learn that Jay has a child he never knew about when they visit his old flame Justice (Shannon Elizabeth) whom she named Millennium “Milly” Faulken (Harley Quinn Smith, Kevin’s daughter). After realizing this, this was a shock to him that he never thought of since he never had a dad growing up. So, it seems like he can be there for Milly, without telling her about the secret with helping her and her deaf friend Soapy (Treshelle Edmond). Is Smith using nepotism again weak? Sure, but I didn’t mind it, and her daughter was fine in her role.

Is it perfect? Of course not. While I thought it was funny, I thought Smith had some meta-type jokes that didn’t work that well, either when he’s poking fun at himself and just repeated lines for nostalgia’s sake. And I’m not going to say the direction looks cheap, or the script was the greatest thing in the world because I knew Smith shot this in a short period, which is impressive on my end.

Even beneath the weed and sex jokes that are constantly around, I didn’t even notice that its story and reasoning for this movie to exist is to acknowledge that growing up as essential to our lives. Though reboots are always popular in our age, sometimes it’s there to give a new audience a purpose to enjoy something parents liked when they were younger and gives them the chance to gain a new experience with the property in bringing a new legacy to them.

Overall, I enjoyed Jay and Silent Bob Reboot. This was what I expected from Smith’s return to the View Askew world. Though I mentioned that not every joke landed, it was able to poke fun at Hollywood reboots with a sequel that’s hilarious, yet unexpectedly mature. Which movie do I feel is more re-watchable? To be honest, its predecessor since I grew up with it. This won’t be everybody’s cup of tea if this is just a ton of fan service, but I know it’s stupid, yet I liked it since it’s made for fans.