(Note: This review contains a spoiler for Avengers: Endgame. You have been warned.)

Spider-Man: Far From Home had the most difficult task as this is the next MCU movie that’s following up Avengers: Endgame, which many of us loved to death (like me) and just made us wonder what’s next for the rest of these characters, including the friendly, neighborhood web-slinger. But it’s probably going to be nice to see him in another standalone movie again since we all needed a breath of fresh air with a tone that feels more grounded.

What’s the Story: In this second installment, Peter Parker (Tom Holland) takes a school trip to Europe with his classmates without all the hassle of doing anything Spider-Man related. All goes well until it gets interrupted by Nick Fury (Samuel L. Jackson) and recruits him to help out while meeting Quentin Beck/ Mysterio (Jake Gyllenhaal), who comes from another dimension, to help out to defeat these beings called Elementals could threaten the earth.

I absolutely loved 2017’s Spider-Man: Homecoming. Not only was it a fun and lighthearted take on one of my favorite superheroes of all-time, but it was definitely a movie that fitted perfect inside of the MCU, which was many reasons why it became my favorite comic book movie of that year. My anticipation for this was pretty high because it’s another superhero movie that’s coming out at the best time possible. But as a Spidey fan just wanting to have a fantastic time seeing him on another adventure, it surely didn’t disappoint as Spider-Man: Far From Home is another win for the MCU and for director Jon Watts.

Got to start off with talking about Holland’s performance, because why not? His performance throughout is fantastic showing how well-meaning he’s meant to play Spider-Man. The growth that Peter Park goes through in each movie moving forward is surprisingly well told. It’s no wonder why he has become my favorite actor to portray the titular hero. Still giving a ton of energy and being relatable on every single level, Holland’s the man.

What Watts and writers Chris McKenna and Erik Sommers get right in both of these is knowing that taking on the responsibility of being a hero and trying to live a normal life is hard to tackle. That’s what Spider-Man also has always been. Even though he’s on a school trip and doesn’t want to have to deal with any trouble while relaxing, he’s still willing to help his friends and the world from danger. In this case, he has to live up to the challenge after Tony Stark died, and so is the rest of the world.

It also does a good job at dealing with what happened in Avengers: Endgame and this feels like a good epilogue for a comic book movie that felt like a terrific conclusion to some of the characters and with this having the same feel as the first where it tends to be a little bit lighthearted as a superhero flick and a coming-of-age tale together.

Hearing the news of Gyllenhaal being brought into the MCU was a joyous occasion, and he completely blew me away as Mysterio, in my opinion. I kind of knew a bit about his character from the comics about how he’s the master of trickery, but they really did this character justice. Fans who’ve been waiting to see this villain on the big screen will be very pleased. The scenes with him and Holland were excellent, and Gyllenhaal’s performance proves why he’s one of my favorite actors working in Hollywood. Also, love the costume design and his powers. 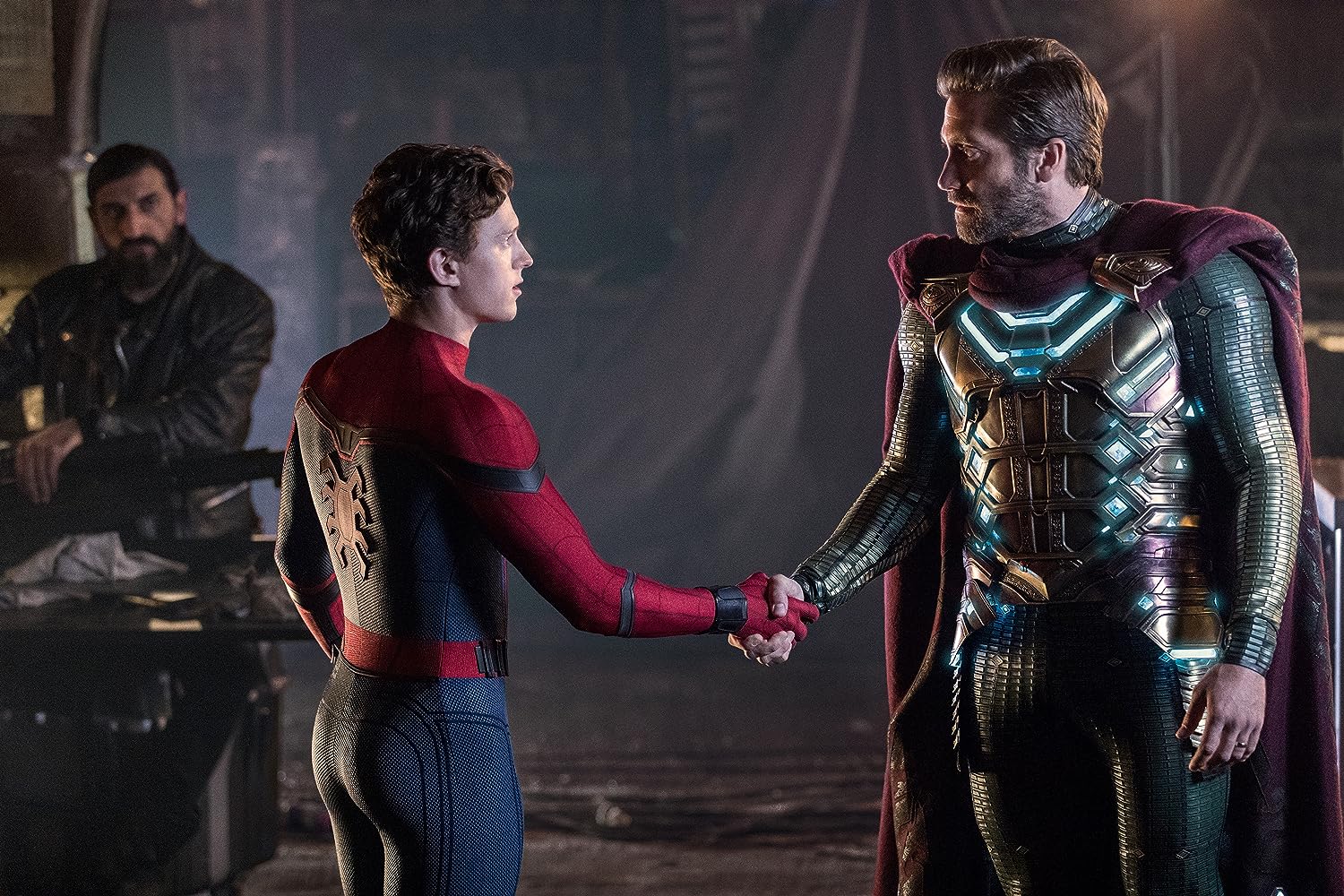 Zendaya as Michelle “MJ” Jones is a lot better in here than in the last installment. She was good in Homecoming, but I didn’t think she was given a lot to do besides have a snarky remark to say. She does that in here too, but she gets involved in the story later on. I pretty much enjoyed any scene her and Holland share because they make a cute couple. She’s important in this installment is because this trip gives Peter the chance to confess his feelings for her. We’ve all been there, am I right?

And all of the action sequences are so well creative. Watts does a better job at having some style with the action this time around as there are a few times Spidey was swinging and it was incredible. Even if the stakes weren’t that high, it still feels exciting, especially during the second act. The action in here made me question why it wasn’t nearly that enthralling both Amazing Spider-Man movies. Maybe it was because it felt dull and uninspired.

The rest of the supporting cast are also having a good time in this, including Jackson and Cobie Smulders back as Nick Fury and Maria Hill, respectively, Jacob Batalon as Peter’s best friend Ned providing much of the film’s comic relief just like last time, Marisa Tomei as Aunt May, and Jon Favreau returning as Happy Hogan. I always appreciate any appearance from Faveru as this character.

While Spider-Man: Far From Home was a lot of fun, this wasn’t perfect as I thought there were some problems that I personally found. The first half kind of took a while to find its footing before all of the action started and was still going for that high school movie vibe. Also, even though it was a lot of humor thrown in here, some of them aren’t necessary for scenes that didn’t need comedy, to begin with.

In the end, Spider-Man: Far From Home was a blast for a summertime blockbuster. There are some things I wanted to talk about in this review, but it would go into the spoiler zone. Being that it’s the last MCU movie to be released from 2019, it’s without a doubt the second best. I might love Homecoming a lot more, but it still offers up a satisfying sequel with some great action and moments of genuine fun. And as for the two post-credit scenes, all I can say that it will blow your minds and my reaction in the theater during the first was completely unexpected. A solid way to wrap things up for Phase 3 and what’s to come next for Marvel Studios.

3 thoughts on “‘Spider-Man: Far From Home’ | Film Review: Spidey Swingin’ For Another Win”