Seth Rogen and Charlize Theron in a romantic comedy together? Seems like an odd pairing. That’s what the marking for Long Shot has been making fun of, and it might sound strange wanting to see the funny Canadian comedian and the Oscar-winning actress form some kind of relationship. It might not be believable, but it’s a premise that can be taken either way.

What’s the Story: Charlotte Field (Theron) is the United States Secretary of State who is considering running for President in 2020. But to help her become more popular with the votes, she hires political journalist Fred Flarsky (Rogen), who used to have a crush on Charlotte when she babysat for him, as her speechwriter to help her be more humorous and lighthearted on her road to her campaign. 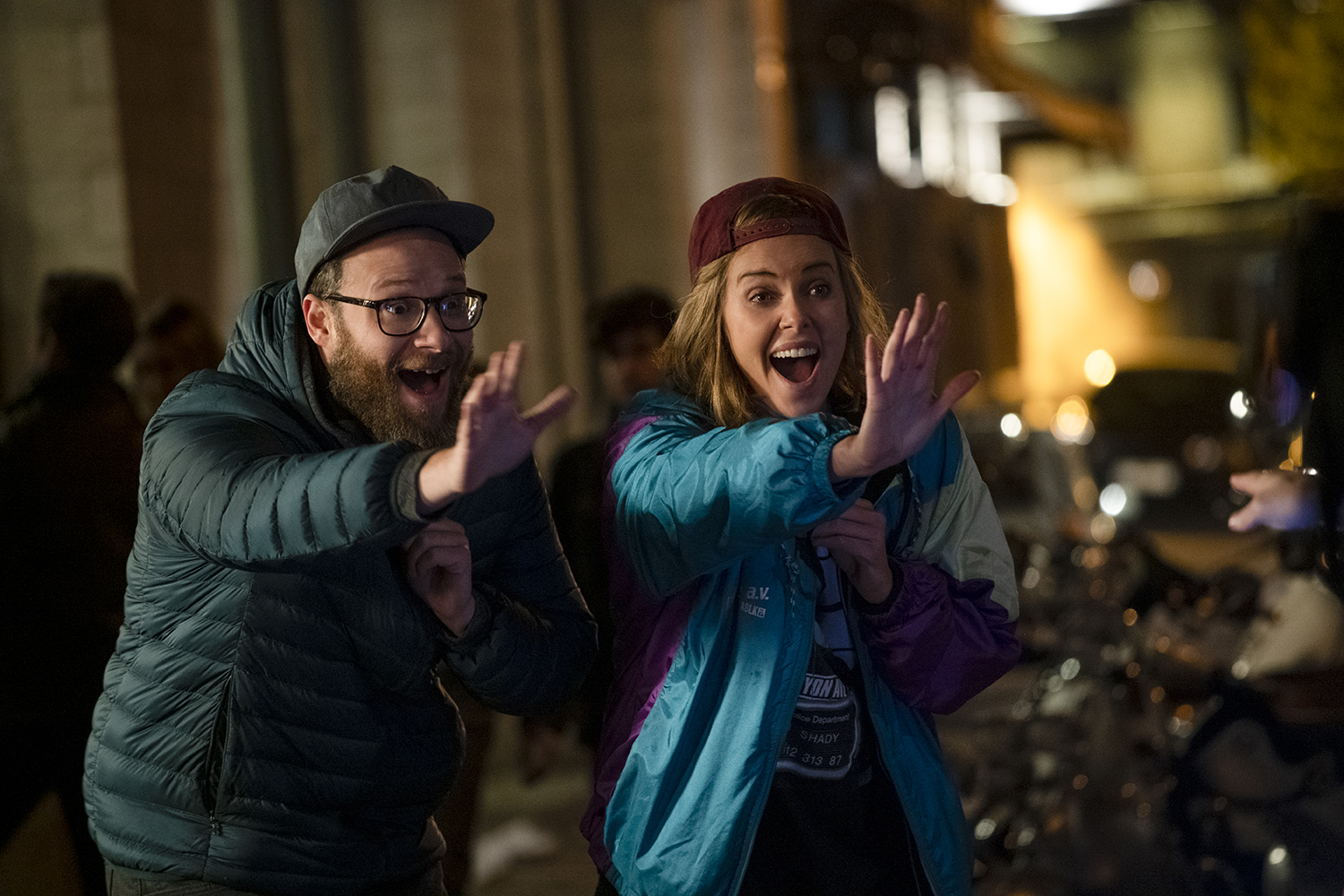 Long Shot was helmed by Jonathan Levine, who I believe is one of the most underrated directors working today. He is well-known for working with Rogen in the past with favorites such as 50/50 and The Night Before. And I was really hoping his latest will be a major mulligan after Snatched (ugh). But ever since this premiered at SXSW with the good buzz surrounding it, there’s a lot to be expecting for a romantic comedy like this. And at this point, I’m becoming a bit of a sucker for them. But you know what, we don’t get a lot of rom-coms like Long Shot because it’s the best comedy of the year thus far.

What makes this work so well is the chemistry between our two main stars here. There isn’t a moment where a scene falls flat and then feeling unrealistic. Rogen and Theron play off each other in an amazing way that’s totally believable. Just think of this as a more calmer version of Knocked-Up, but with a more likable actress in the lead. Any scene where it’s the two of them having conversations were ultimately nice. Both of their performances worked in spades.

Rogen always does his part in making the audience laugh and being the relatable character. In here, it’s a role that’s a bit different from what he usually does, and it’s great. Theron impressed me much in here since she’s pretty much been in either action, dramedies, or dramas in her career, so it feels comforting letting her comedic side out, and it shows why she’s one of my favorite actresses working. Dear Hollywood, put Theron is more romantic comedies, please.

Levine and writers Dan Sterling (The Interview) and Liz Hannah (The Post) know that we need to see that relationship between Charlotte and Fred can be more than them being a little bit different since it’s all about knowing about each other out and being invested from start to finish. This is also pretty funny, and the jokes were well-executed. Even taking certain jabs at Fox News is worthy of some laughs. Why? Because they deserve it, in my opinion. It has that typical humor that’s to be expected from a Seth Rogen comedy, but it still works if you’re a fan.

The rest of the supporting cast also gets their fair share of comedic moments that includes O’Shea Jackson Jr as Fred’s funny best friend, June Diane Raphel as one of Charlotte’s key staffers who don’t seem to like Fred, and Alexander Skarsgård as the Canadian Prime Minister trying to win Charlotte’s heart.

The politics side that’s presented in here doesn’t come across as boring or unimportant. A time where it’s getting tired and topics that anybody gets mad at, this isn’t going for that in Long Shot. What can be appreciated is that it doesn’t go for the easy targets but address issues. I mean, who wouldn’t vote for Theron’s character if she was real? She comes off as smart, beautiful, and cares about the world. And this can show that politicians can be easy-going and can have a typical relationship that doesn’t resort to trouble in the process, especially with journalist.

As for problems that I personally had, it shouldn’t come as a surprise to know it’s predictable, but I can easily forgive it when the story is engaging. Other than that, there’s a character played by Andy Serkis as this billionaire media mogul under obvious makeup, and his scenes really didn’t work when it was distracting and almost pointless.

But you just gotta love that feeling when you feel satisfied watching a great rom-com, and that’s what Long Shot was. This is the kind of rom-com that makes me believe love truly exists (it’s the truth). Rogen and Theron had excellent chemistry with each other throughout, it’s hilarious, and it’s realistically charming. Interested in something heartwarming that provides a ton of laughs, then go see Long Shot. Loved it.

Sidenote: This also made me fall in love with Roxette’s “It Must Have Been Love” again.