If your movie involves music or a particular singer going downhill with the fame of success, that’s enough to get me invested no matter what. Vox Lux is just that. But can a smaller movie like this blast out a huge voice for all to listen to? Brady Corbet (The Childhood of a Leader)’s second effort in directing takes on the task of discovering a huge fictional talent.

The film is split up into three acts narrated none other than Willem Dafoe. In 1999, 13-year-old girl Celeste (Raffey Cassidy, Tomorrowland) was the sole survivor after a deadly mass shooting at her school. To channel her pain after a life-threatening spinal injury, she and her sister Ellie (Stacy Martin) wrote a song as a tribute to the students who were killed in that tragedy entitled “Wrapped Up”. The song became so popular that it instantly made Celeste into a huge star. Their parents hired a (nameless) manager (Jude Law) to make the chances of her being a singer become a reality. 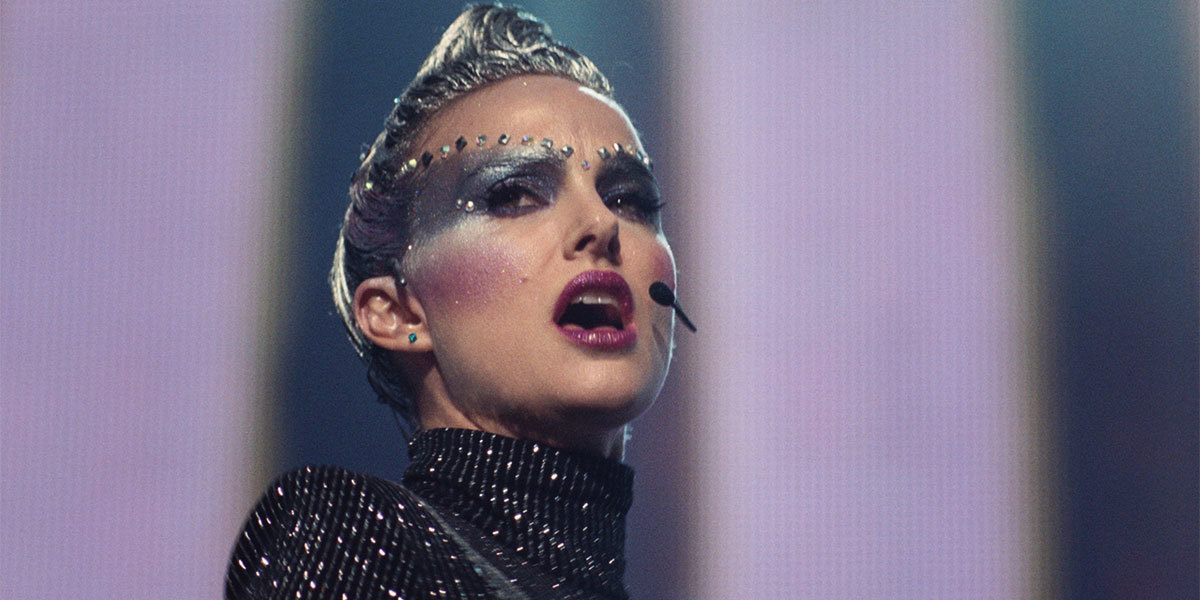 Cut to 2017 where we now see a grown-up Celeste (Natalie Portman) gearing up for her upcoming concert for her newest album “Vox Lux” with her teenage daughter Albertine (also Cassidy) there. But like most musical artists, she has been in the public eye for years, and it isn’t all that great to what’s been happening recently in the news of a terrorist attack on a beach in Croatia where the same glittered masks as seen in one of her music videos.

Vox Lux was getting some buzz after it had its premiere at the 75th Venice International Film Festival and at TIFF. The film was only playing at one theater 12 miles away from me, and the day I found out it was playing was the last day. This kinda had the potential to be some kind of music equivalent to Black Swan. It isn’t.

At one point where I was thinking this was gonna be a pretentious drama. “Pretentious” is one of those words that I hate describing a movie but it was felt in here. That was the fear after watching the trailer. You can see Corbet was trying to push the message about how we should treat celebrities in public and how America’s society needs to change its act. Can one’s frame be the cause of somebody’s else’s personal acts of violence? The acts of violence that were shown here were unneeded, especially the school shooting scene. It just uncomfortable when 2018 dealt with common shootings that we can’t get over.

Outside of that, I just didn’t like Celeste that much as an adult. She does come off as this self-centered and unlikable celebrity that I’ve always been annoyed with. There’s a sense that she loves her kid and cares about her fans to continue on performing for tonight’s show, but I just couldn’t feel a connection towards her.

Portman is one of the best actresses working today, and I was curious to see how she would play this mega pop star. Truth be told, it’s a role that’s just alright. Nothing was great, but it’s not something that would earn her a Best Supporting Actress nomination. I wouldn’t far as to say this isn’t a top ten performance from the Oscar-winning actress. The scenes where she shares the screen with Law (reuniting 14 years after Closer) and Cassidy do flow through, even if the dialogue doesn’t work. And I don’t know about New York accents, but her Staten Island accent was hit or miss.

All the songs were provided by singer Sia, and they’re just alright for pop songs. The best song is “Wrapped Up” because I actually listened to the song multiple times before watching it and it’s the one that sounds the closest to something Sia would have on one of her albums. If Celeste was a real artist, I probably wouldn’t listen to her songs constantly, but it’s workout music.

By the end of Vox Lux, it didn’t leave a lasting impression of me. Maybe it was because of the mixed reviews that I was hoping to possibly enjoy it, but it’s just average. And, as expected, it’s gonna be another movie where it might become a cult following, but I hope it doesn’t. There’s more to be explored in Vox Lux if it had a better script and didn’t include all these themes.