Director Duncan Jones has always been talked about as a director in which people are going to be talking about as the future passes. Fans have held his directorial debut Moon (still haven’t finished it yet) a classic and his follow-up Source Code was a smart time-traveling thriller. But his 2016 adaptation of Warcraft took a huge step down as it was really bad, in my opinion. He now comes back in Netflix’s newest original film Mute. Who would’ve thought it turned out to be a complete bore?

Set in Berlin in the future, Leo (Alexander Skarsgård), unable to speak after a serious accident he had as a child, searches for his missing girlfriend Naadirah (Seyneb Saleh). As he seeks answers, Leo finds himself mixed up with Cactus Bill (Paul Rudd) and Duck (Justin Theroux), a pair of irreverent US army surgeons of a mission of their own.

Though curiosity is the way to think ahead about what’s next for Jones, Mute wasn’t anything. The trailer didn’t look intriguing, but I honestly wanted this to be a mulligan for Jones after Warcraft. Making a mute joke would be too obvious as Mute just can’t get to entertaining in the 125 minutes watching for anything exciting to happen.

For me, I’m always intrigued with anybody coming up with brilliant ideas to think of original pieces of sci-fi because it won’t be based off anything and it would feel different and unique in the way it’s presented. In Jones’ case, you can very much see the effort he wants to prove with co-writer Michael Robert Johnson, this is just uninteresting with almost every scene that occurs. Some elements have been done way better before this came out and it carries on familiar territory. What did this feel like? Take the visual portrayal of Blade Runner/ Ghost in the Shell and the detective elements of Inherent Vice, and you would still get nothing out of it.

The reason that Skarsgård’s Leo is unable to speak is that his parents were Amish and they fused to have him operated. Even in the bad movies he’s in (Battleship, The Legend of Tarzan), Skarsgård always the positive aspect about them. And he was fine here, but it’s enough to say I desperately cared about his character since there’s little development to be found within him. But we’ve already had a movie that recently focused on a mute protagonist, and it’s called The Shape of Water, which is what I should’ve been watching instead. 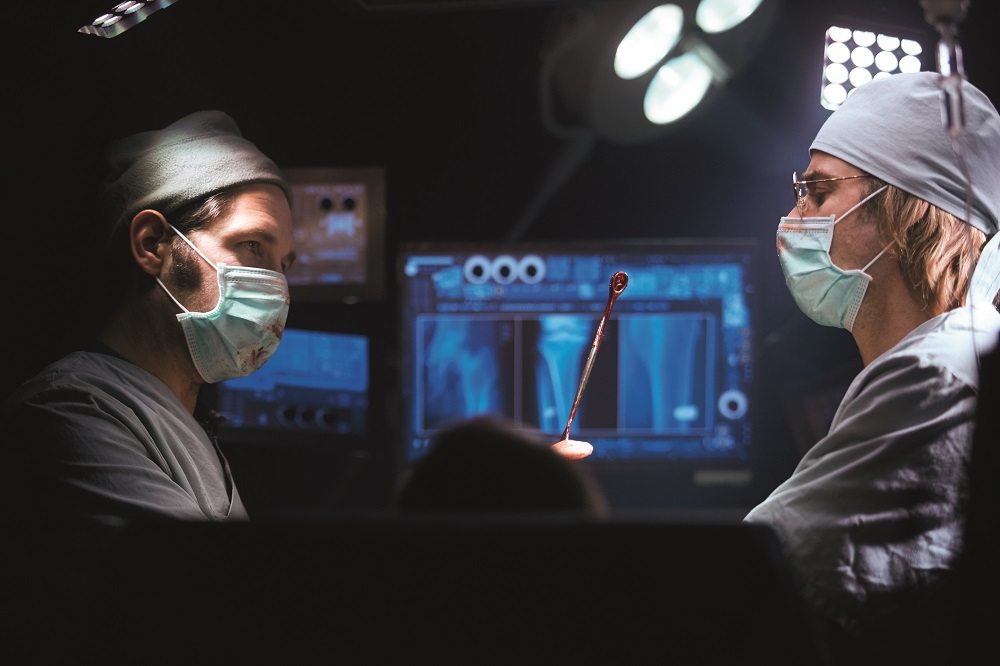 And as much I enjoy Theroux as an actor, his character, Duck, felt completely misplaced in this movie. The scenes with him and Rudd could’ve been straight out of a dark comedy and these moments really didn’t mesh with the tone consistency to where certain lines of dialogue come off as creepy. I should also add that they were also in Wanderlust together, and that was a better movie with Rudd/Theroux.

This is also turned into a boring story being played out as the pacing doesn’t flow through perfectly. Nothing about the world building that Jones’ was wanting to covey spoke out in such. There was a point where I was wondering when the actual investigation plot starts kicking in. By that point, I was just thinking others things that I need to do in my week.

Are there any positive things that are to be found in Mute? Besides Rudd being at least entertaining and tolerable in some of the scenes he’s in, Clint Mansell’s score is perhaps good, and the visual look that Jones’ has going for it is good, although nothing stood out.

Is it safe to say Mute was not good? Yes, it was. After the recent letdowns of Bright and The Cloverfield Paradox, respectively, we’ve been seeing was terrible Netflix originals that are coming from the genre that could’ve been theatrical. Almost everyone was wishing Jones would come back in an unforgettable way. Alas, it didn’t happen. Can’t even say I’m disappointed because I was never really thinking this was going to be good. Wouldn’t say Mute is the worst movie of the year so far because I can tell that there are going to be other films that will be worse than the attempt Jones was trying to pull off.

Serving as another miss from director Duncan Jones, Mute is, unfortunately, a dull and uninspired neo-noir sci-fi that’s all over the place.

One thought on “Mute: Film Review”