Military dramas don’t have a steady hand for a lot of people to really clam onto even after it’s finished. Though every true story needs to be turned into an action-packed movie that could hopefully enjoy, the Jerry Bruckheimer produced 12 Strong probably won’t make a strong case for a true story that should’ve been way better than it actually sounds.

What’s the Story?: After the tragedy of September 11 struck upon America, Capt. Mitch Nelson (Chris Hemsworth) leads Special Forces to Afghanistan to be the first people to fight against the Taliban alongside another alliance to help these men fight back and get home safe and sound.

Based on Doug Stanton’s 2009 bestseller, Horse Soldiers: The Extraordinary Story of a Band of U.S. Soldiers Who Rode to Victory in Afghanistan, there wasn’t anything that struck interesting about the movie when it first came out. Not to say that these men who fought for this attack shouldn’t be disrespected, like any war to protect our country from any danger, they should be praised for their valiant effort. It’s just for a war movie to come out in January, there’s little anticipation unless it’s done rightfully so in execution. Does that make 12 Strong any good? Not really, but it could’ve been a lot worse, to be honest.

First-time Danish director Nicolai Fuglsig, known for being a photojournalist and TV commercial director, tackles the insight of the story, which could be difficult if this wasn’t’ trying to be like another Bruckheimer produced movie Black Hawk Down. He doesn’t come close, but even for a first timer behind a studio movie, he did fine. The action sequences of the warfare were at pretty entertaining whenever it was happening. And yes, these men eventually go up against the enemy on horseback. Those were the only times throughout the film where it was getting exciting.

Hemsworth always gives a committable performance, even in average movies like this. He’s really the one we’re supposed to care about and even though his character can be labeled typical when he has to get back home safely to return to his wife and daughter, it’s because of Hemsworth giving the film what he got.  There’s a relationship between Hemsworth’s Mitch and General Abdul Rashid Dostum (Homeland’s Navid Negahban) from the Northern Alliance that wasn’t that investing at first, but you can see that they want the same goal when working with each other to take down the Taliban. 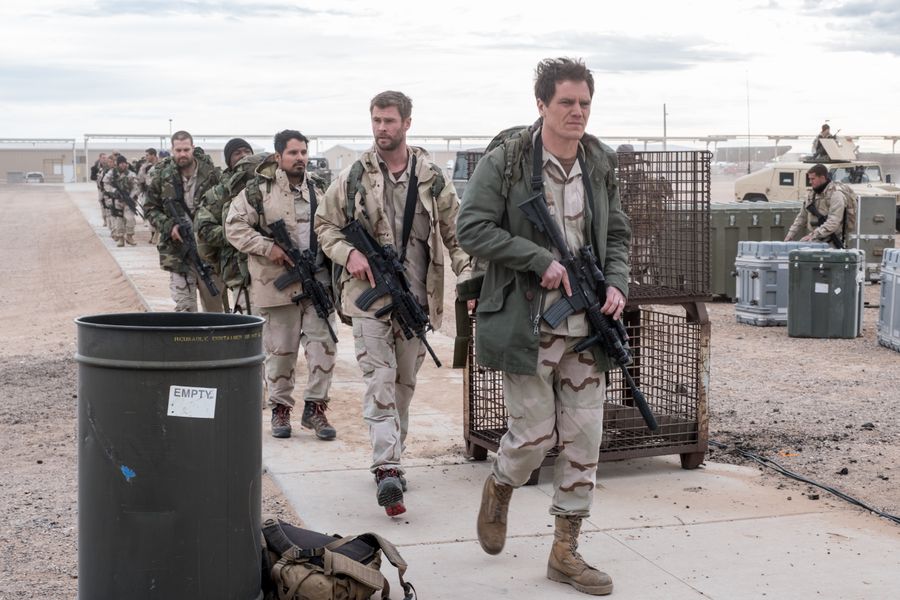 Then you got your supporting cast that includes Michael Shannon, Michael Pena, Trevante Rhodes (Moonlight), etc. And for much that these are talented performers, the script didn’t have the time to develop any of the characters. Rhodes actually felt wasted since he didn’t have a lot of scenes to work with.

An important story like this shouldn’t be bland, and it honestly was. Writers Peter Craig (The Hunger Games: Mockingjay Part 1 & 2)  and Ted Tally’s (The Silence of the Lambs) adaptation of the book doesn’t lead to a convincing plot that consists of some cheesy/poor writing that doesn’t feel realistic. It falls to be boring with nothing interesting happening, to become cliche and following the familiar troupes in every war movie that’s been done before. Even though these are real events that occurred 17 years ago, it didn’t feel it this happened. And where were the emotions? It was almost a lifeless action that should make me feel almost scared that somebody might die during all of the action.

You’ll be charming in your seat just waiting for it to end and forget about it in about a week. Though it means well enough to be an engaging patriotic film, 12 Strong at least pays respect to the brave soldiers. But if I wanted to watch something that’s better than this, Lone Survivor or even 13 Hours wouldn’t be that bad. Nothing was too powerful, nor riveting enough to call this mediocre.