George Clooney has established himself not only as a talented actor but a competent director whenever he gets the chance. While his credits range from great (Confessions of a Dangerous Mind, Good Night and Good Luck, The Ides of March), to dull (Leatherheads), to downright boring (The Monuments Men). His latest film, Suburbicon, proves a point about not being considered one of the best out there.

What’s the Story?: Suburbicon is a peaceful, idyllic, suburban community with affordable homes and manicured lawns — the perfect place to raise a family, and in the summer of 1959, the Lodge family is doing just that. But the tranquil surface masks a disturbing reality, as husband and father Gardner Lodge (Matt Damon) must navigate the town’s dark underbelly of betrayal, deceit, and violence.

Just from judging from the trailer, there’s a good chance Suburbicon could end up as a satire of the 20th-century suburbia that’s gonna be memorable. Though I didn’t get the chance to see it in theaters because not a lot of movies were worth paying the admission price, I was actually surprised to hear that it got negative reviews. Can’t you blame them? Not only was Suburbicon one of the most frustrating movies to come out with a great ensemble attached, but it’s one of 2017’s biggest disappointments.

Clooney was ultimately trying to make a Pleasantville-meets-A Serious Man combo movie because of its well-made beautiful production design to make look like the late 1950s and it really didn’t match to what he was trying to pull off. The tone was just all over the place when it’s trying to be funny and then a drama with no way of telling how to tell about many scenes with this issue.

Damon’s Gardner is having his life spinning in circles with trying to figure out how to deal with this mayhem that’s happening to him. Moore actually gets to play dual roles here as twin sisters Rose and Margaret. Rose is Gardner’s wheelchair-bound wife who gets chloroformed to death while their home is invaded by burglars (Glenn Fleshler and Alex Hassell). While Margaret decided to move in to take care of Nicky so they have someone else in the house. The problem with that is that she’s trying to become her own sister.  Damon and Moore’s performances are fine, but their characters just became unlikable as the film continues. 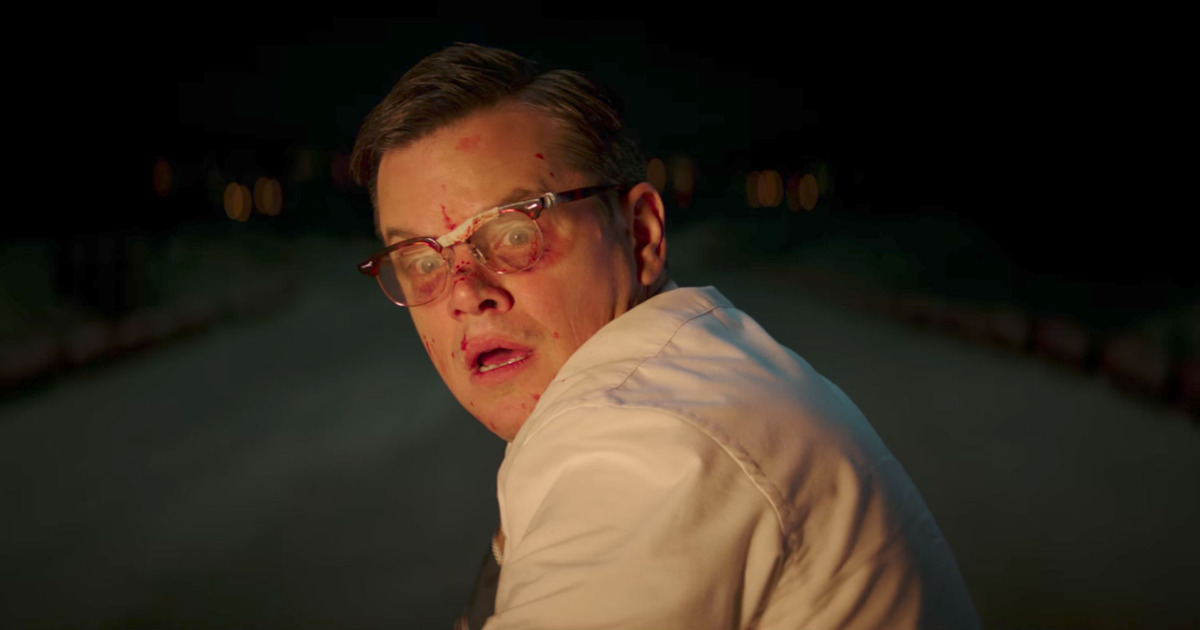 The one performance that was surprising was breakout star Noah Jupe’s as Nicky Lodge was really good since he was honestly the only likable character throughout the entire movie we’re supposed to root for. Jupe also shows off a range of emotions for his role. Good on him.

One of the many problems that Suburbicon has is that the marketing never mentions the subplot about this community is getting up and arms about a new African-American family moving into an all-white neighborhood and how everybody is angry that they protest outside on their house causing mayhem. A black family might bring changes to a community? Oh, the horror? Even when we’re supposed to care for them because of the nasty tension that pushes towards them, it doesn’t work since they’re underdeveloped.

From a screenplay that’s written by Clooney, Joel and Ethan Coen, and Grant Heslov, there was a lot of high hopes that this story could possibly be somewhat entertaining. Only to find out that the Coens originally wrote this script back in 1986 right after they made Blood Simple. Why was does finally getting made 31 years later for a film that isn’t reasonable good? The overall plot felt boring and very uninteresting with its dumb twist and turns that doesn’t work that made it feel like two different movies. If the Coen brothers did direct Suburbicon, maybe it would’ve been better, in my opinion.

Another performance that made each scene he’s in watchable is Oscar Isaac as Bud Cooper, the charismatic insurance agent. His screen time is very short, but he makes all of his scenes intimidating and the least bit entertaining.

For a dark comedy, it failed to be just that. The script is weak when it’s trying to be funny with little jokes they wanted to make with the serious tone meshed in. What’s with this year and conflicting tone issues?

The trailer should be on the list of misleading its audience to where you think the main focus would be on Gardner facing against the mob and the crazy stuff that happens in between. But it’s also about the racial commentary about the black family feeling like two different movies crushed together to make some even more ridiculous.

In the end, there’s a great movie somewhere in Suburbicon making fun of the American dream, and it does a bad job at it. And though Clooney shouldn’t quit directing because of two bad movies in a row, he should work with a better story to work handle that doesn’t have an assortment of problems, which in reality, turns out to be a mess. Why do I get the feeling Trump is gonna love this movie?

Suburbicon’s effort to be a dark comedy while providing commentary is a tonal mess failing to be a redeemable film from Clooney. Grade: D+