Certain movies are going to be targeted to its demographic. Sometimes it can be a sure watch at any sleepover or slumber party as it will give the chance to enjoy said movie with your friends and have lots of fun with what happens. After watching Rough Night, that’s probably not gonna happen.

Jess (Scarlett Johansson) is an engaged politician who’s united with her best friends from college (Jillian Bell, Ilana Glazer, Kate McKinnon, Zoë Kravitz) for the typical bachelorette weekend in Miami. But things go south very quickly as they accidentally killed a male stripper. Trying to cover everything up to not get themselves in serious trouble, they must make the night trouble free for the five of them.

These five ladies are very good at what they provide in terms of entertainment. This is also director Lucia Aniello’s feature debut as she has directed and written episodes of Comedy Central’s Broad City (a really funny show which Glazer also stars in and co-creator). But nothing about this looked funny when hearing this idea. None of the trailers weren’t that humorous from my standards. And judging from the plot and the trailer alone, this looks very much like a combination of The Hangover, Very Bad Things, and Weekend at Bernie’s as all of them have similar things that this film was going for with a female-centric feel. Rough Night ends up with all of them, but in a dumb way imaginable.

The biggest strength that’s carried throughout this is that the female leads had very good chemistry. Their bond together worked even though the script doesn’t have a lot of put on their shoulders with the material they had to work with. All of them were fine in their roles individually sometimes. You can tell that they’ve been best friends for a long time.

Johansson as Jess gets the chance to play the straight man in this as she’s running for state Senate; Kravitz as always impressed me in anything she’s in playing the friend who’s in the middle of a custody battle; Glazer is basically her character in Broad City to me as she’s a homeless activist; and McKinnon plays Jess’s Australian friend when she studied a semester abroad and she was perhaps the second-best gal in the group. People always give her shade because she always does over-the-top performances like in Ghostbusters (her performance was funny, in my opinion). I truly never understand because I think she always brings her strive into delivering moments of humor. So I wish they would stop throwing her under the bus sometimes. 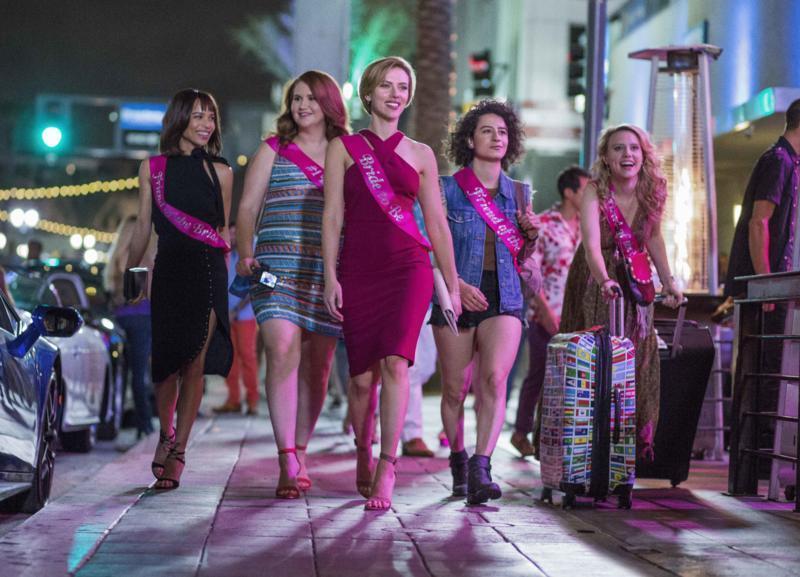 I think Bell is funny, but she was the one who got on my nerves for the first two halves of the film. She’s the one who organized the bachelorette weekend together and she’s the jealous friend of Johansson’s through about how great she is. That’s the kind of performance she’s been in the past few movies she has been in.

Nothing was particularly funny because any attempts at the jokes were really dry and no wit to them. There was perhaps a quick scene where I almost did laugh, but besides that, just had a straight face for a majority of this. Sometimes when it’s a black comedy, it’s difficult to provide anything hysterical. If anything should’ve made me laugh, it was anything involving Demi Moore and Ty Burrell as these swinging neighbors next door.

The parts where it cuts to Paul W. Downs, who also co-wrote the film with Aniello and plays Jess’s fiancé, there’s no sense of having that storyline be involved in this as it makes it longer to suffer through. Because he must drive down to Miami to figure out what’s happening over there.

Speaking of the plot, this goes into ridiculous territory quickly once the dead stripper plot kicks in and it’s as predictable as it chugs along. So the writing didn’t go for anything too original as it’s a concept that’s been done before.

If this movie didn’t involve the dead stripper element of the film and didn’t make it the primary focus, it probably would’ve made it watchable while making an effort to good jokes. That would’ve made the told a lot more light-hearted tone instead of going dark in a comedic way.

In conclusion, Rough Night wasn’t all enjoyable to sit through. This has great female talents in here and they’re wasted in a story that’s tough to latch onto. And it didn’t deliver on any big laughs. At most, this is probably a rental.

Rough Night has a well-meaning cast of female talents, but it never succeeds in delivering the laughs in this poorly misguided dark comedy.