Martin Scorsese is a true filmmaker that’s does something different in every one of his films and just captivates its audience. This movie, in particular, was a project that he been wanting to do for many decades but never gotten the chance to do it until now. This isn’t his first time directing a faith-focusing film as he did 1988’s The Last Temptation of Christ and 1997’s Kundun. Now, this passion project as finally came to be with Silence completing his “faith” trilogy. A test of faith shows that brought a sense of emotion and tense. And throughout Silence, this was a frustrating film to process while watching.

Two Jesuit priests, Father Sebastian Rodrigues (Andrew Garfield) and Father Francisco Garupe (Adam Driver), embark on a perilous journey to Japan to find their missing mentor, Father Ferreira (Liam Neeson), who denounced the Christian faith in public. While there, the two men minister to the Christian villagers who worship in secret. If caught by feudal lords or ruling samurai, they must renounce their faith or face a prolonged and agonizing death. 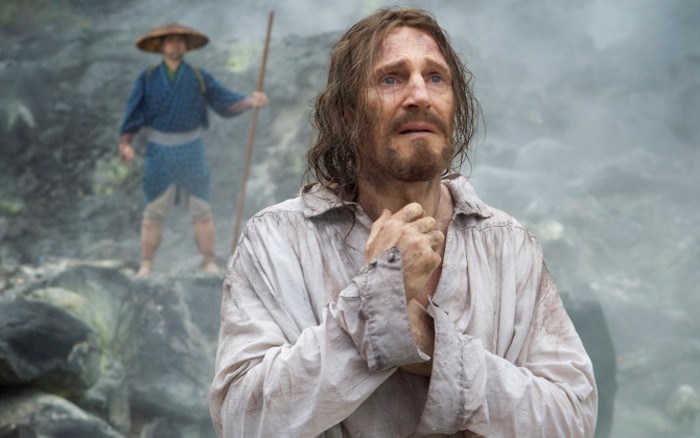 Scorsese might have directed the most unsettling film in his career. This felt like this was filmed in the 17th century as the production design and using real locations looks authentic. The Japanese culture that follows along with it keeps it a nice touch to everything too. It felt different from a lot of his other works as this doesn’t involve gangsters or any other crime that we’re used to seeing him do. But this was competently directed all the way through. The screenplay that he and Jay Cocks wrote based on Shusaku Endo’s best-selling novel, delved into a deeply connected path that can reflect on anybody on a quest like what’s presented here. This is also the most beautifully shot movie yet with the help of Cinematographer Rodrigo Prieto as he captures a sense of beauty with these wide shots that make everything seem perfect.

Andrew Garfield has made a name for himself in 2016. He did a brilliant job as Desmond Doss in Hacksaw Ridge and as Rodrigues here, it was a captivating role that’s made for him. This was his movie, to be honest. You just see the struggle he’s trying to accomplish as he’s willing to down forth his own life to persuade other people to follow Christ. It’s important to get as many people to join in but it can lead to suffering later on. His performance in Hacksaw Ridge was better, in my opinion, but this is one of the best emotionally-driven roles he’s given yet. Adam Driver delivered another great performance and worked well with Garfield.

Liam Neeson isn’t primarily in the movie that much. But he was a good screen presence towards the third act. And his role was profound in an away that’s unexpected. Inoue Masashige as the Inquisitor felt like Hans Landa from Inglourious Basterds as he stole most of the scenes he’s in and he was very talented throughout.

But why describing this film frustrating? My biggest problem with Silence is the overlong runtime as it clocks at 161 minutes. It’s no secret that Scorsese’s films are long. This is close to three hours. But I felt the pace after an hour in. It wouldn’t have bothered me that much unless something does happen and most of the time, it just got a bit uninteresting after a while.

The real questions that should be answered on what should be justified when dealing with your own faith? Not everything is given to us like a piece of cake. But it will have some kind of consequences to follow.

Spreading the word of Christianity is an important factor to do now and I couldn’t believe what was happening back then. Coming from someone who’s a Christian, it isn’t that common for people who have conflicting faith upon others. The belief that people have shouldn’t be put upon the risk of someone else’s. Because this was a time period where being a Christian was outlawed in most countries I believe. As it’s shown of people denying the faith in public, I find it a struggle that anybody would still do that even today.

As of now, this might needs a re-watch to fully understand it. But it could be one of those movies that don’t have replay value after it’s done. Though I love Scorsese, this isn’t going to be one of his films that I’m gonna remember for the most part. Disappointing to say I didn’t love it. But it’s great to see a faith movie that I’m interested in.

Overall, this is a well-acted, beautifully directed, and strongly put together piece of work to come out of one of my favorite directors of all time even if it wasn’t one of the best of the year as it’s most challenging.

Silence brings a complex, unsettling, and powerful drama in Martin Scorsese’s filmography though it’s frustrating to sit through at times.