Does it always seem unfair to wait to watch the most-talked-about to premiere at Sundance to great responses? It does when you couldn’t afford to go. But it’s always exciting to hear the buzz on the films that will sure to get attention once they’re released. It happens every year, and Max Barbakow’s directorial debut Palm Springs had major positivity vibes surrounding it for months. Now, it’s finally time to check it out.

What’s the Story: When carefree Nyles (Andy Samberg) and reluctant maid of honor Sarah (Cristin Milioti) have a chance encounter at Palm Springs for her younger sister’s wedding, things get complicated when they find themselves unable to escape the venue, themselves, or each other.

Knowing this had The Lonely Island (Samberg, Akiva Schaffer, Jorma Taccone) producing the film was one thing (they also produced the overlooked Brigsby Bear), but hearing the news Hulu and Neon bought the film rights, breaking the record for the highest sale in Sundance history by 69 cents, means business when it’s a hit already. This would be one of few times where I was excited to check out a smaller movie I dared myself to not watch the trailer since even though I know about the premise, yet I wanted to be something I didn’t know too much about. Because of that, Palm Springs was fascinating to sit through, as it happens to be one of the better comedies of 2020. Being this was Barbakow’s first time directing wouldn’t have come to mind since it was a bright idea to see how to take the angle of a rom-com and throw in a twist to it, making it enjoyably fast-paced.

I going to try not to delve deep into what it’s all about, but just know that it involves our main characters caught in a time-loop, similar to Groundhog’s Day or most recently with Netflix’s Russian Doll (I should start watching it), where they repeat the day of the wedding over again. When I heard this story was taking on that concept, it would not bother me unless Andy Siara’s screenplay had something more inventive to throw into a premise we’ve come to custom to in any form of genres, and it delivers when combining it with a romantic comedy I cared about through the end. The story drops us right as we see Nyles already appearing as this carefree guy with his casual attire of shorts and a Hawaiian shirt, knowing everything about to happen, for some reason, and that’s because he was been in this time loop for a while. For the watchers, we’re like Sarah, where you have no clue what just happened. How they can do this should be seen on your own.

Does it ever get repetitive? It doesn’t with every other movie or television show in relation, but this is one of those cases where it means something after it’s over, and that’s what I always keep in my mind the most. Once it changes the perspective of both characters a couple of times to see things where they’re coming from, it’s easy to feel and understand what kind of people they are before and when trapped in this situation. How would you feel if you’ve and somebody else had to do this and felt a connection with him/her? I can deal with that. We see them as two people who are at a standstill with their lives, but it gives if us the chance to care about them, even if that means watching them go about with their hilarious antics in trying to make the best of the day before waking up.

And it is hilarious, as expected. The best way to describe how the laughs were delivered is subtle without them staying too long on them. It has times where it handles the raunchy jokes good enough, but I was cracking up, especially throughout the occasional montage, which involves a wedding cake and a bomb.

But you go into a romantic comedy hoping to get the right amount of chemistry and outstanding performances from its two leads will ultimately carry this. Luckily, they didn’t disappoint. Samberg and Milioti worked very well together in every single scene they shared, and it never becomes frustrating to know they’re hanging out with each other nearly whenever the day loops back. This has got to be the best performance I’ve seen from Samberg for a long time with film. He’s still one of my favorite comedic actors, so it was nice to see him be funny and mature with his role Nyles. Would I hang out with him? Well, is Hot Rod a wonderful comedy? The correct answer: Yes.

But Milioti is an actress people really need to keep their eyes on after this because she’s incredible and possibly stole the film from everyone. I’ve been a fan of her since appearing in the last season of How I Met Your Mother, but we haven’t seen her in the lead in a movie until now. Not only was she funny, but I felt like she was an actual person to relate to, where being attached to her character as possible. It would be hard not to fall head over heels for this woman if we were in Samberg’s place. Can I please date her?

They were perfect, and the rest of the supporting might’ve not been the focus of it all and felt a little wasted from my perspective, but its cast is still worth mentioning that includes J. K. Simmons as a wedding guest who’s hunting Nyles for reasons you need to see, Camila Mendes, Meredith Hagner as Nyles’ girlfriend Misty, and Peter Gallagher as Sarah’s father. 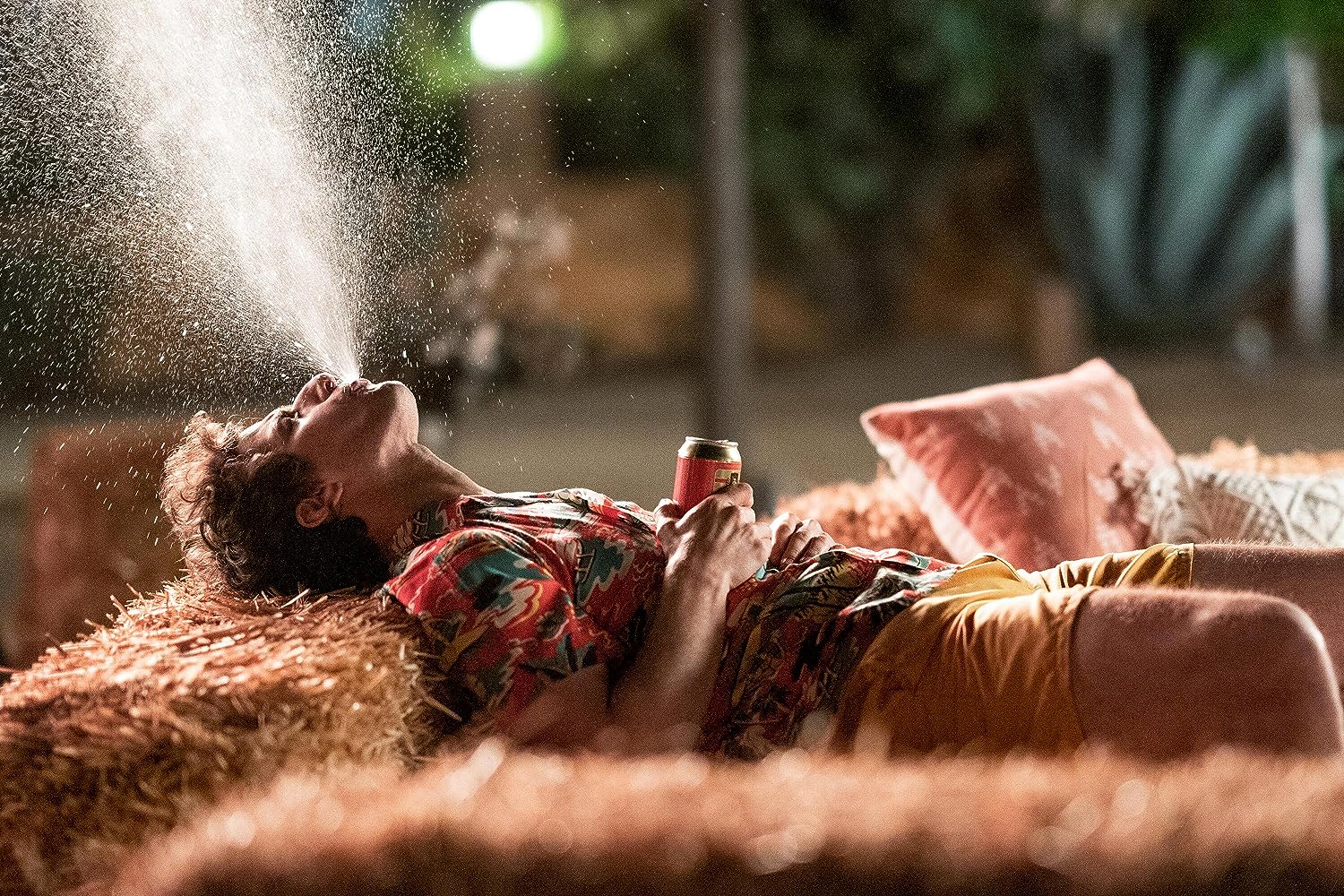 Just when I thought it would follow through a predictable plot, it does, but it still goes in a direction I didn’t see coming where it tried to be in-depth. It would be impossible for people to be in the same position as Nyles and Sarah, maybe for scientific quantum physics reasons, it delves into certain consequences we must understand. If you’re caught in the same way, wouldn’t you want a companion along with you without the experience of loneliness? This time-loop might give both of them a chance to be different human beings not just today, but tomorrow and further into the future.

In the end, Palm Springs was not what I expected, and it made for a delightful surprise to witness the concept explored funnily and differently, making it much more than another Groundhog Day to look at. You’ll fall for the performances of both Samberg and Milioti, and it never becomes predictable, which is a major plus. This might’ve done some decent business if they released this in theaters, mostly smaller indie theaters. Could I see myself watching it again? Totally, and it’s an original movie definitely worth watching on your own time if you have Hulu.