Fans of the comedy genre will always be in a pleasant mood whenever writer/director Judd Apatow comes flying with a recent movie that touches on the relatable side when you think about it. For me, I’m a fan of his efforts as a director, and you’re looking at a track record that’s three for five when talking about everything before his latest flick The King of Staten Island. Anyone who’s looking for a film where they need some laughs but also leaves you thinking about how you were in your mid-20s, then you” have no problem renting this for your comedic pleasure.

What’s the Story: Scott (Pete Davidson) has been in a state of arrested development after his father, who was a firefighter, died when he was a kid. He’s still living at home with his mother Margie (Marisa Tomei), while his younger sister Claire (Maude Apatow) heads off to college. He spends most of his days living out his mid-20s by smoking weed with his buddies and wanting to become a tattoo artist. But when his mother dates a firefighter named Ray (Bill Burr), it doesn’t sit well with Scott and he stars to his life. 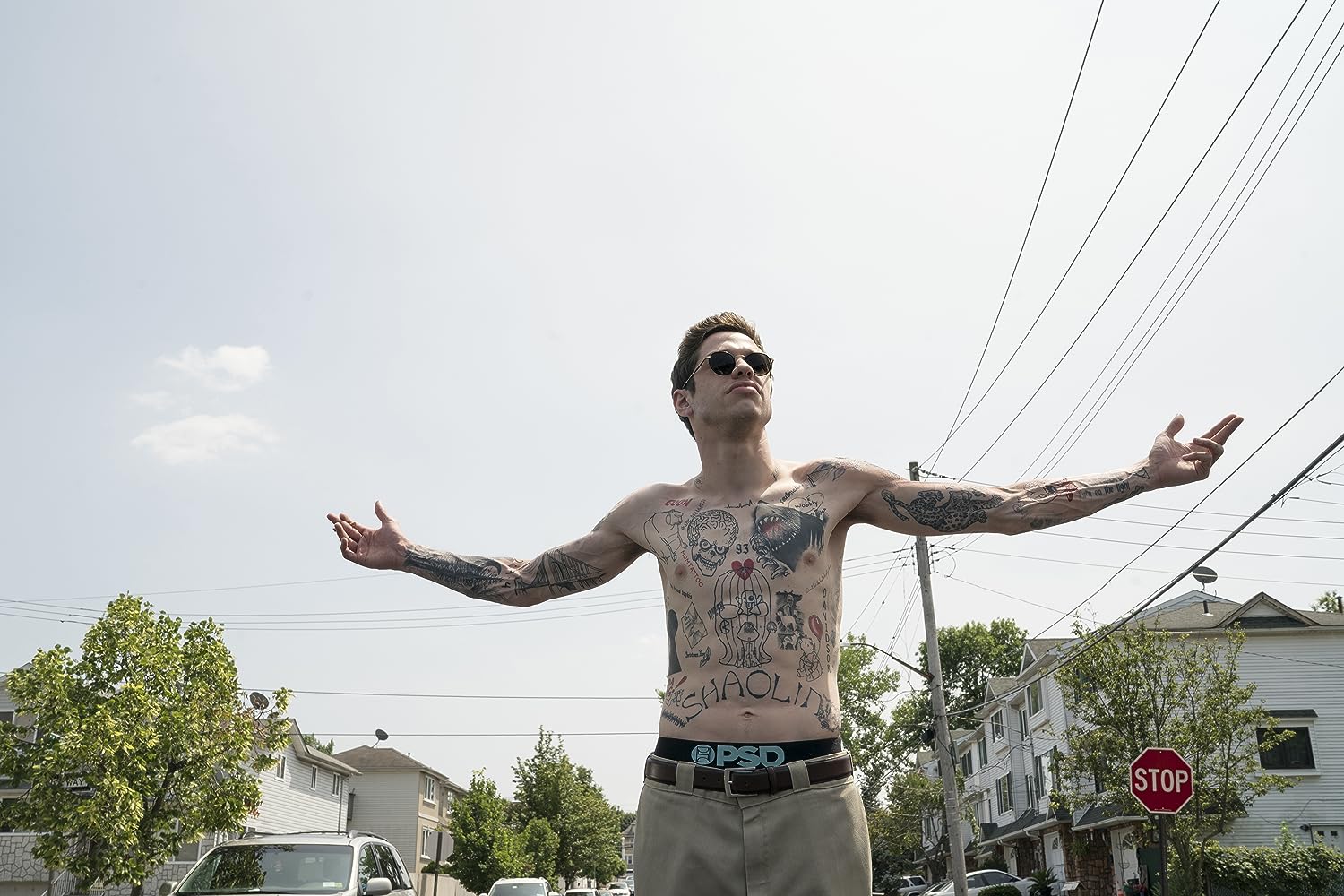 Like every movie that was supposed to come out during the summer, this is another film from Universal Pictures to skip its theatrical release date and made the call to put it On Demand. That makes sense, but it’s a bummer for someone who really wanted to see this on the big screen since I’ve been looking forward to this ever since I heard Apatow and Davidson would work together. The trailer made it out to be a good time (made me listen to The Wallflower’s “One Headlight” for the past few weeks), and though it might have been that most of the comedies this year hasn’t been the greatest, this is one you have to watch because The King of Staten Island was really good.

Its primary star has made a name for himself for being a cast member on Saturday Night Live for five seasons now. Despite the reputation he’s gained in the media in the past few years, he can be funny. But it’s about time for him to be in the lead role this time around for a change. From what I heard about his performance a few months ago with Hulu’s Big Time Adolescence was that he wasn’t bad, although he didn’t have a lot of range. If I had to be honest, this is what you call a breakout role if I’ve ever seen one that will give him more respect. Davidson’s performance as Scott was great, even though I can understand he’s playing himself. While you might think that fact as your watching, he needs to get credit for playing a likable, slacker character who might be fun to hang out with, but also understand where he’s coming from whenever the script calls for him to act emotional or lost.

Aside from the main lead, everybody else in the supporting roles didn’t disappoint whenever they are on screen in their respective roles. There’s no doubt Marisa Tomei, who I don’t think ages, will always give a poor performance as Scott’s mother. But Bill Burr was the standout here as Margie’s recent boyfriend, and I haven’t seen a ton of his work in the stand-up work, but he definitely impressed me when he worked well with Davidson is the scenes they share together. And then you have Bel Powley (The Diary of a Teenage Girl) as Scott’s kind-of girlfriend Kelsey, and Steve Buscemi isn’t in it a ton in here in a small role, but he always gives some levity whenever he comes on screen. 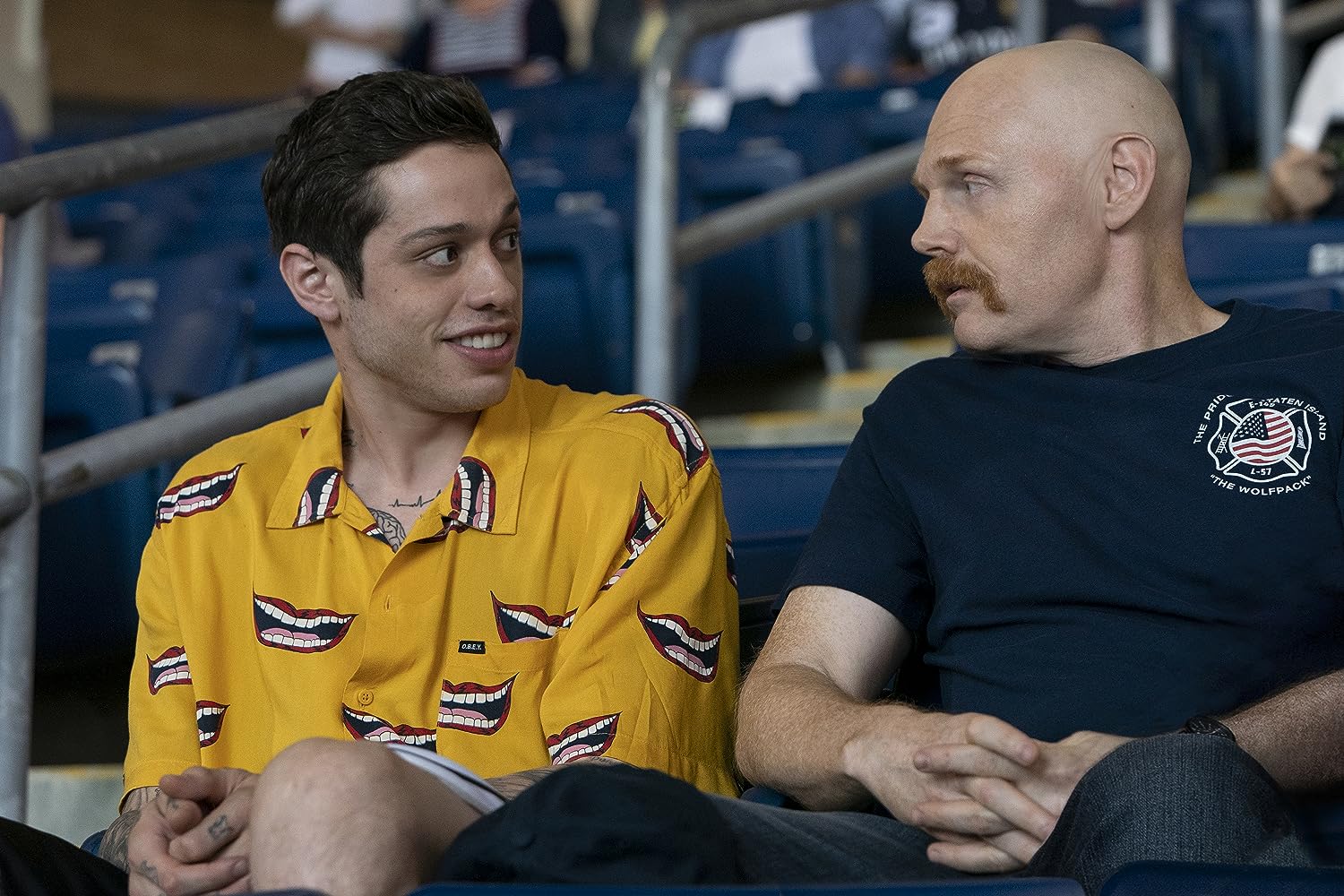 The aspect of the film that needs to be praised for is the screenplay, which Apatow, Davidson, and Dave Sirus wrote. This might be the most I’ve been entertained by one of his films that didn’t bore me. Even though his past features focused on Steve Carell trying to lose his virgin at a slightly older age or Seth Rogen not equipped to become father, Apatow’s sixth film was able to handle a story like this in a fashion that felt more relaxed and getting so much of what’s going on inside the mind of Scott. Like always, he balances the humor and heart to a good degree. Davidson’s life loosely inspired this as his father in real-life was a firefighter and sadly lost him during the September 11 attacks, if you didn’t know that. Scott’s in the position where he’s still grieving about his father after 17 years, which is understandable for those who’ve lost a loved one, including myself. Nobody is ever ok when you lose someone close to you at a young age. This dramedy was a way of telling his story and see where he’s coming from in what it’s like to grow up in a fictionalized perspective.

With talking about the direction, there was honestly nobody else who would’ve done it better to tell this story, while also being a love letter to Staten Island. This felt like a genuine story to be connected to in finding a way of caring for all the characters in here are developed. But does it get the job by being hilarious? It absolutely does, and it had some pretty funny moments throughout, especially whenever Davidson says something from his mouth when he uses comedy as a defense mechanism. Will everyone appreciate every joke in here? Probably not, but it’s the kind of humor that’s to expect with these comedies, along with this being his best use for his dramatic elements.

As I was watching it, I worried about my own life. Since I’m turning 24 next month, a part of me is worried about how life is going to treat me and wondered if anything will go right in my life to have the perfect career, health, and just not become some kind of joke right after college. Anybody who will watch this will find Scott relatable, but without the pot smoking. A part of me feels scared about failing to be somebody while my friends from school are doing better things with their personal lives. The road to life is different for everyone in the world, yet we have to make it better for ourselves. Honestly, I’m the kind of person who feels stuck in life right now because I’m never smart enough to get everything right.

Like with every typical film with Apatow’s name behind it, there’s no lie in saying it goes on a little too long (135 minutes). But the truth of the matter is that it didn’t exactly feel that long from what I was watching, and I believe it needed to be that way. There might’ve been two scenes where I was questioning if it was there for story purposes, but I probably wouldn’t think of it later on since it was well-paced.

By the end of The King of Staten Island, I’m glad to say I thought it was an excellent film, and it’s perhaps Apatow’s best work since Knocked Up. While it’s funny, this is unexpectedly the most mature effort in his career. Davidson’s role is enough to buy him for as an actor now more than ever, and the story can really reflect on yourself positively. Out of all the films that were supposed to be in theaters but went to streaming, let it be sure this is the best I’ve watched if you’re a fan of who’s involved.