When you take a look at the title, I’m pretty sure you’re probably thinking, “What is Jexi“? Not going to blame you since Lionsgate didn’t do any marketing for their recent comedy that I decided to check out because there’s a chance it won’t be in theaters too long. The first time I was the trailer was when I saw Good Boys a couple of months back, and just thought it looks stupid. Yet, Jexi wasn’t as terrible as I thought it would be, there’s nothing to say about this when it just goes for one stupid joke.

What’s the Story: Phil (Adam Devine) is a wannabe journalist in San Francisco that’s the kind of guy that’s obsessed with his phone to the point where he doesn’t have any friends or connects with anybody outside his job. But when he gets a new phone with an operating system called Jexi (voiced by Rose Byrne), it’s there to make his life better, even if it means making it terrible for him in the process.

So, when you take a glimpse at the trailers, is there one movie that immediately comes to mind when thinking about it? That would be Spike Jonze’s Oscar-winning film Her. Jexi is basically the more comedic take on the premise of Her if it was made for those with no sense of humor. But instead of a touching love story between a man and his phone, this one goes for all the crude jokes it can handle without being smart about it. Maybe it was because of my very low expectations did I expect this to be one of the worst movies to be released in 2019. But was it still a waste of time? Absolutely.

One of the reasons that this wasn’t going to be that funny was who behind it, which is Jon Lucas and Scott Moore. Both of them wrote and directed this, and they aren’t good at either. I’m not a fan of Bad Moms and its sequel since they don’t know how to perfectly write humor well. And with a story that’s very thin and doesn’t provide nothing else, it does it stale quickly when this should’ve been like a short on SNL for all we know. We get the idea at the very beginning that Phil is dependable on his phone from when he was a kid to an adult, which makes him an introvert. Also, the direction was poor when it has to do these quick zooms in-and-out of the shot, and it was distracting to me.

Devine has proven himself to be a funny actor in movies like Mike and Dave Need Wedding Dates and Isn’t It Romantic from earlier this year. He’s shown to be charming enough when the script calls for him to be that way. You don’t see Byrne’s face, but you do hear her voice through the Devine’s phone, and her gimmick is that she’s sassy and very judgemental towards him to the point of jealousy. I mean, you wouldn’t hear a complaint from me if Rose Byrne was the voice of my phone. 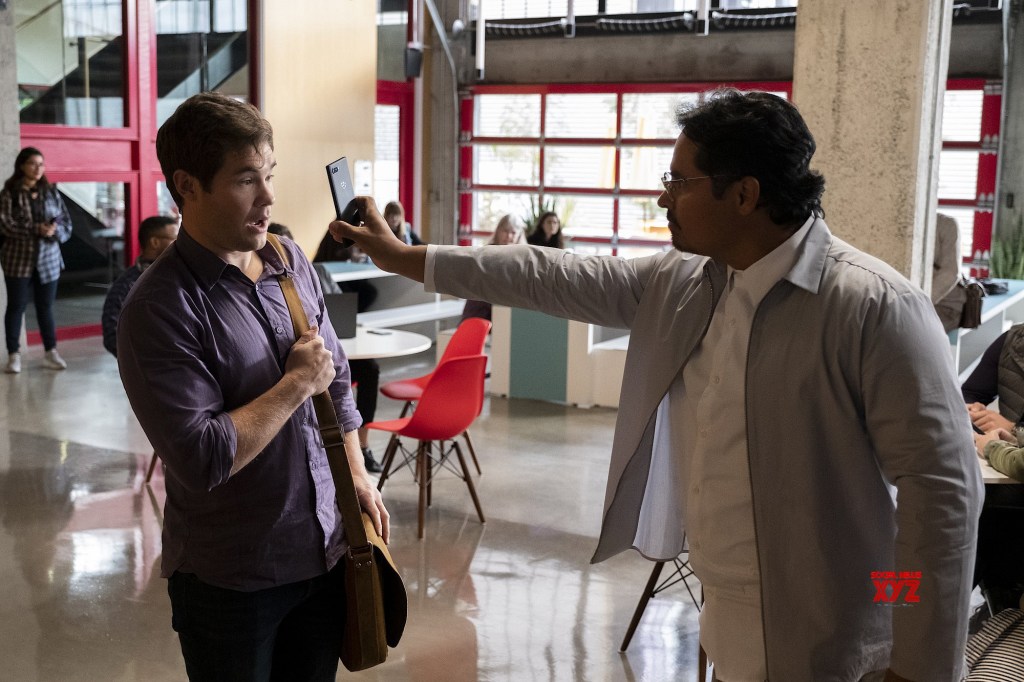 Probably the reasons why Jexi wasn’t a stinkpile like I expected were because of these reasons alone: There were a few times that I found myself chuckling about five times. Three of them came from Michael Peña, who plays Phil’s boss. I even tried to stop myself from even smirking that the painfully stupid ones. The other thing is that the chemistry between Devine and Alexandra Shipp as Cate surprisingly worked for a lot of the movie, and you kind of buy them as a couple. It does feel very rushed, and I will admit that, but that’s probably the one thing that was trying in the movie at least.

Even when the movie wants to be funny, it doesn’t work about 87% of the time. Nearly all the jokes are lazy and can be seen coming a mile away. Byrne’s deadpan delivery can be humourous because it can say things that Siri can’t say. Although it carries on that joke too long for me when it’s being said on the phone itself. The small crowd that I saw it with was laughing, so at least they had fun with it, I guess.

But were the directors trying to convey a message about how people are so distracted by their cell phones every minute? Most of the time the people in the backgrounds are on their phones, especially in the opening credits as “Connection” by OneRepublic plays in the background. That’s totally unbelievable. I got the point before paying my ticket for this that we don’t have to look through the world on our phones all the time, but explore the basics of reality.

Was there a point where pain was happening in my body while watching Jexi for 84 minutes? Not necessarily. The movie just goes through the motions very quickly without having given time for the main character to process these new feelings. By the end, you feel bad for who’s involved in this pointless comedy. Not really worth your time to check out, even if that one person wants to see Devine get insulted and cursed by Byrne doing a Siri impression.