Knowing what you’re getting into when it comes down to a certain biopic revolving around musical artists of any kind because it’s going to be crazy, yet probably not entirely truthful. This Mötley Crüe project has been in development hell for years, and now we are finally getting the biopic treatment in Netflix’s The Dirt, based on the 2001 memoir of the same name, “The Dirt: Confessions of the World’s Most Notorious Rock Band”, written by the four members and writer Neil Strauss.

This follows the story of raise and fame of the famous heavy metal band and its members: bassist Nikki Sixx (Douglas Booth), lead vocalist Vince Neil (Daniel Webber), drummer Tommy Lee (Colson “Machine Gun Kelly” Baker), and lead guitarist Mick Mars (Iwan Rheon, Game of Thrones). As they became more well-known, it gets to the point where, individually, will experience the pitfalls of what it truly means to be famous.

Normally, I don’t consider myself as the greatest heavy metal fan out there, but there’s no denying Mötley Crüe is one of the best to come out of the decade. Not only that, they are the epitome of a band that goes through the sex, drugs, and rock ‘n roll throughout their controversial career. I didn’t much about them, but their classic songs like “Home Sweet Home” and “Dr. Feelgood” are instantly good. But “Kickstart My Heart” is the kind of tune that gets me pumped up every time I listen to it. I forgot Netflix was actually still making this until they released a trailer a month before it came out. Didn’t know what to think since it will likely be a biopic that everywhere to not be enjoyable. Turns out, The Dirt wasn’t as bad as one would think, although it could be tighter.

Director Jeff Tremaine (Jackass series) and screenwriters Amanda Adelson and Rich Wilkes (xXx) had to take the memoir and take it unbelievable with the crazy antics the band was getting into back then. Some moments depicted in The Dirt are possibly fictitious to make the movie more interesting, and it doesn’t work nearly when you do a little research after it’s over to find out that it’s right. Besides that, Tremaine’s direction is what one would expect when directing anything from Netflix. Nothing too special about it. Most of the writing doesn’t exactly provide the best-written dialogue, and it doesn’t help when it has multiple voiceovers and breaking the fourth wall on occasions.

Personally, my knowledge about the bands, outside being in a lot of news headlines, is very little. Some things are true that I remember reading about like Tommy Lee’s relationship with actress Heather Locklear and Vince’s 1984 car accident which lead to the death of Razzle of Hanoi Rocks fame. Even a disgusting moment with Ozzy Osborne (Tony Cavalero) is factually true, and I can easily believe it when it’s the Black Sabbath frontman.

All of the performances were about so-so from about everybody in here. The two that stood out from the rest were Booth and Baker. Booth hasn’t been in that one good movie that’s easy to consider him a breakout actor, but I bought him as Nikki Sixx for a large majority of the movie. And Baker actually impressed me. It was a strange choice to have famous rapper portray drummer Tommy Lee, but he proved me wrong and seemed to be having the most fun out of everybody. 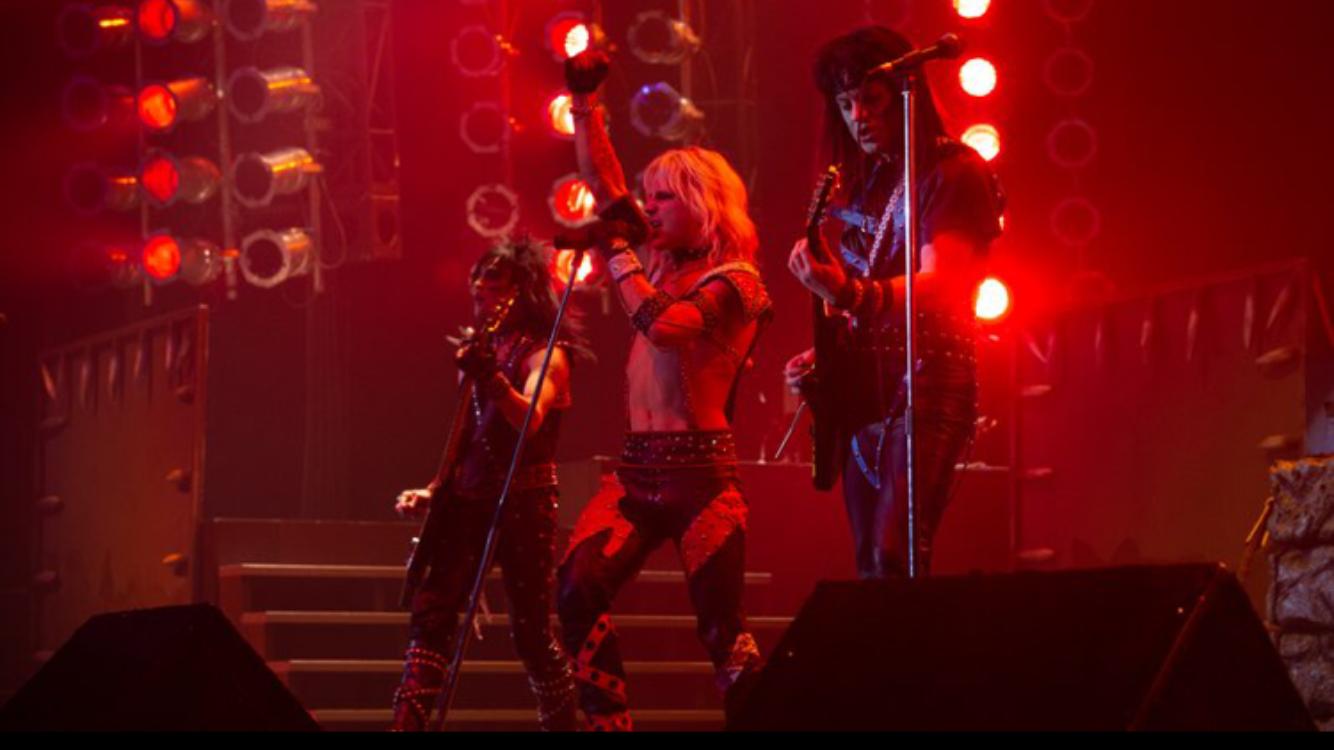 But with a lot of biopics, it tends to be the sort of story that’s playing on Behind the Music, though it would still go for that hard R rating after the amount of sex and drugs that have taken place in nearly every five minutes.  The opening proves that point alone. The book probably has more information that can’t be shown in the actual movie version of their stories.  For someone that doesn’t know about the band’s history, it felt too rushed, and most events move at a quick pace to the point of not knowing what year the scene’s in. It only happened a few times. And when any movie has countless scenes of people doing cocaine, that’s enough to make me not do any of that.

In all honesty, fans of Mötley Crüe might get a kick out of The Dirt. For me, it should’ve been a lot better than what I was expecting. I personally feel in the minority when I can easily say Bohemian Rhapsody is a better music biopic than this, and that has more flaws to follow. If you feel the energy when the music sequences kick in and this feels like the kind of biopic that’s right up your ally, then there will be no problems will be serving your way. For the rest of you, probably don’t waste your time on this.