Drew Goddard is one of those directors that any time his name is attached, there is a lot put on the table. Most of us have been waiting for years for his follow-up to 2012’s The Cabin in the Woods, which was such a great horror movie that I thought was gonna be terrible. And we have a new mystery in the form of Bad Times at the El Royale to have us enjoy our stay for ourselves.

What’s the Story: Set in 1969 in Lake Tahoe, seven strangers meet at the El Royale, a rundown hotel that’s on the California-Nevada border, where not all that it seems as all of them have dark secrets hidden within themselves and must try to redeem what they have during one night. 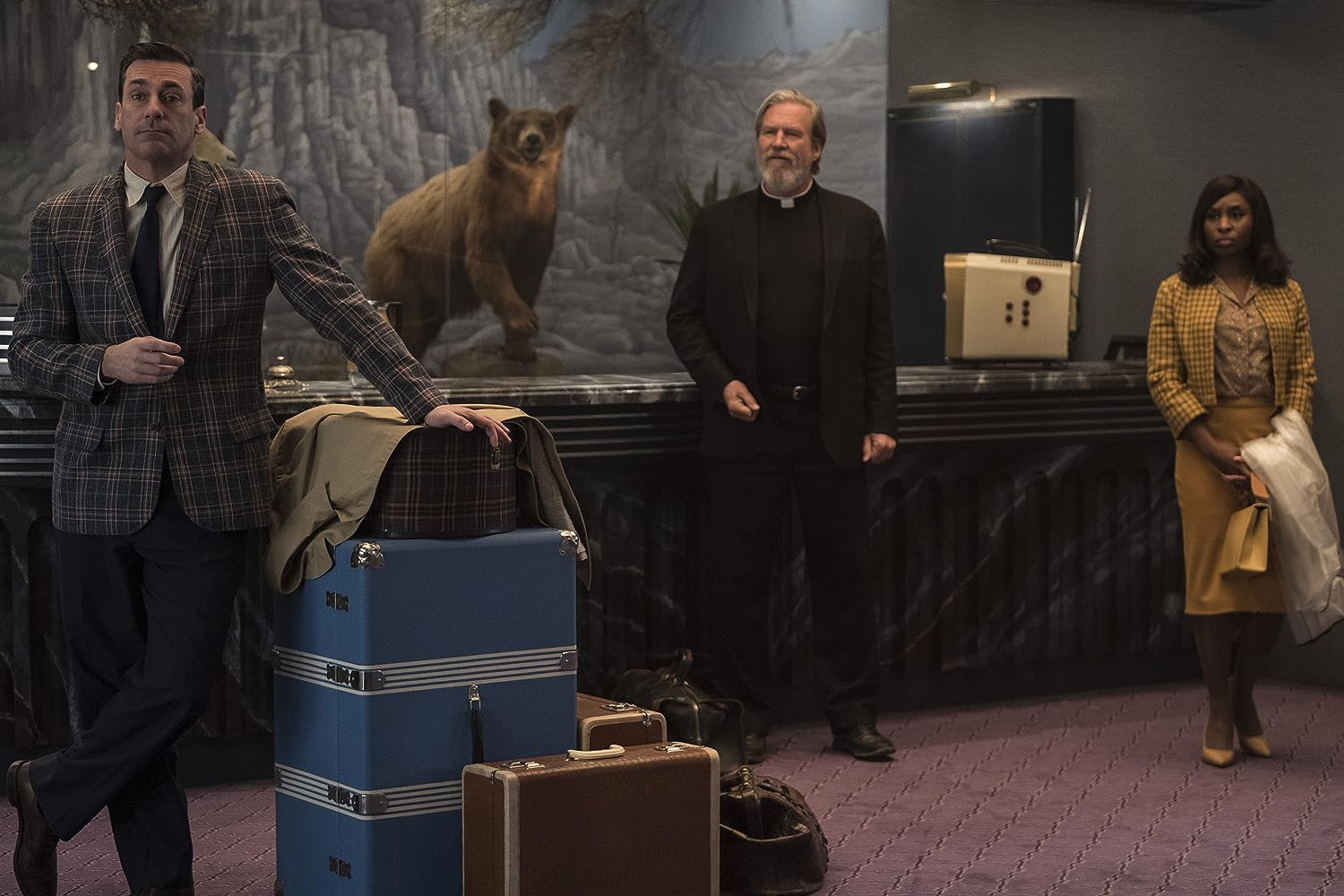 Just a rundown of who comes in: Jon Hamm as Laramie Sullivan, a traveling salesman; Jeff Bridges as Father Daniel Flynn, a priest with a hard memory; Dakota Johnson as Emily, hippie trying to get her younger sister Rose (Cailee Spaeny, Pacific Rim Uprising) out of this cult; Cynthia Erivo as Darlene Sweet, a struggling backup singer traveling to Reno for a show; Lewis Pullman (The Strangers: Pray at Night) as Miles Miller, the concierge and only employee at the hotel, and Chris Hemsworth is Billy Lee, this Charles Manson hippy cult-like leader.

Now I was really anticipating this solely on Goddard’s involvement as both writer/director. And from what the trailers were indicating, this would be the kind of mystery that’s gonna leave me shocked and just thinking everything that’s just happened. This also reminded me of a cross between The Hateful Eight and Identity in its originality. However, Bad Times at the El Royale fell short from being a good time, unfortunately.

This is a pretty good ensemble here. Each actor has a different personality and a reason why they decided to stay at this hotel. Hamm and Bridges never bring in a bad performance; Johnson finally has an interesting role after the awful Fifty Shades of Grey trilogy when she’s working on screen with Spaeny, and Hemsworth brought the energy up when he finally appears when the third act starts. 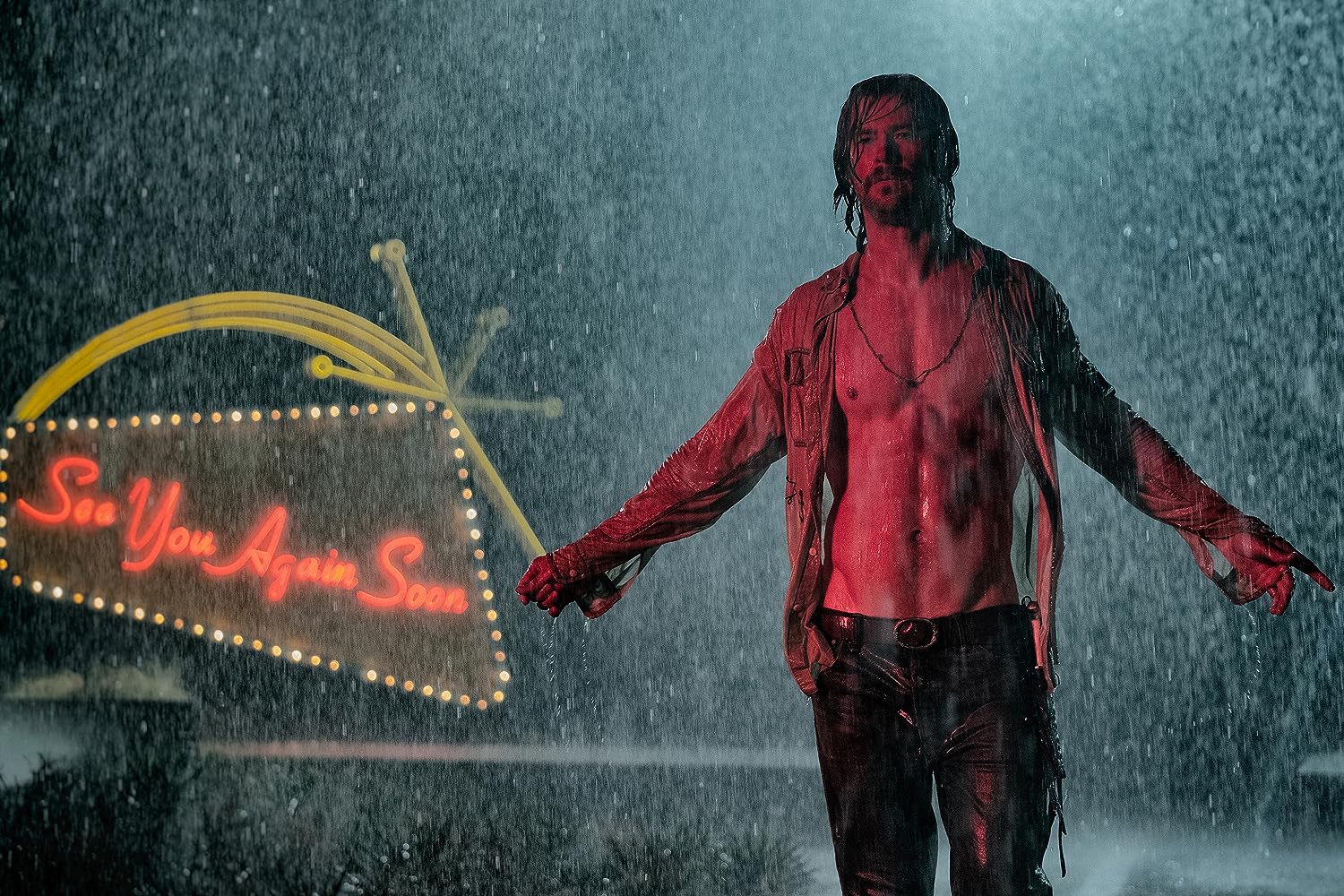 But the two standouts in the entire film comes from Erivo’s Darlene and Pullman’s Miles. Erivo is a name that’s gonna be talked for the rest of the year because her performance made for my favorite character in for what kinds of makes her the primary focus. She will also appear in Steve McQueen’s Widows not too soon. The scenes with her and Bridges are favorite moments. And Pullman’s worrisome demeanor causes him for a character with some sins.

As for Goddard’s direction, it’s really well-made and beautiful fitting into the time period along with Seamus McGarvey’s classy cinematography. And the production design was fantastic.

The reason why Bad Times doesn’t end up being great is Goddard’s storytelling. You can see that he wanted to make this in a Quentin Tarantino-style with its nonlinear narrative and different chapters for the characters. It can work when Tarantino does it better but it feels like a detachment. Anytime is uses flashbacks to show the connections and points-of-views to see how it makes sense of their backstories, it loses momentum. Other than that, nothing was surprising with most of the reveals. This also tends to drag a little bit which the movie has no real purpose to be 140-minutes to fully flesh out the plot.

By the end Bad Times at the El Royale ended, it kind of left me disappointed because I wanted to love this as much as the next guy. The all-star cast and a few other elements made this work, while not leaving a memorable impression as I left the theater. Not having much fun found here from a mystery neo-noir a writer/director like Goddard behind it.

Bad Times at the El Royale has trouble finding its footing in the pace and story even when Drew Goddard’s direction and ensemble makes up for its faults.

One thought on “‘Bad Times at the El Royale’ | Film Review”