With all these dumb direct-to-DVD movies that have a bunch in dinosaurs in ridiculous premises that would are on Syfy channel early in the morning, it’s a great thing at Steven Spielberg adapted Michael Crichton’s Jurassic Park to the big screen in an impressive and memorable way. Now that we’re five movies deep in this franchise, Jurassic World: Fallen Kingdom might as well tip the scale in how it can capture the magic from its very beginning.

What’s the Story?: After the chaos that was pledged upon the Jurassic World theme park three years ago, the island of Isla Nublar is on the verge of a volcano eruption a lot of dinosaurs leftover with nowhere to go. To stop this from happening, Owen Grady (Chris Pratt) and Claire Dearing (Bryce Dallas Howard) go on a rescue mission to save as many dinosaurs as they can before they are extinct.

There’s no doubt about it on the fact nearly everybody loves the original Jurassic Park. And despite mixed reviews, I’m one of the few people in this world who actually liked Jurassic World, released back in 2015 and directed by Colin Trevorrow. Even though it doesn’t hold up too much after re-watching it, it’s still the best Jurassic Park sequel at that point, in my opinion (and I don’t crap on it like everybody else). Also, who would’ve thought it would become one of the highest grossing movies of all-time? Originally looking forward to seeing what Fallen Kingdom has to offer, but to be honest, the anticipation for its sequel just wasn’t very high since the trailers were underwhelming. But director J.A. Bayona (The Impossible, A Monster Calls) was gonna be replacing Trevorrow to hopefully deliver on a more horror thrilled follow-up. Was I wrong? It pains me to say that I left Jurassic World: Fallen Kingdom both angry and sad at the same time.

First off, I’ll start off with the positives things that I was fond of. For one, the opening sequences set during a rainstorm wasn’t that bad; it was creepy and intense as it was the best opening since the first film. Pratt’s charisma is always a charm even in a dull movie like this. He still gives it his best as Owen even though there isn’t much development towards him. And the entire sequence where the volcano was erupting (shown prominently in the marketing) was pretty impressive and really the only time throughout the movie where there was brief tension.

Now we go into the problems why Jurassic World: Fallen Kingdom left a sour taste in my mouth. Bayona does try to make it the darkest in the franchise by going back to its horror like roots. Some ways it does, other times it really doesn’t. Visually speaking, it’s little better this time around, although I felt its predecessor was more bright. Trevorrow and Derek Connolly, who wrote the first film, signed on again to write the script and it’s riddled with uneven tones and bad humor. Because it felt like two different movies involved: A rescue mission that’s similar to The Lost World and then this stupid auction that happens later on in this mansion lead by Rafe Spall’s cliche, one-dimensional villain Eli Mills. Unlikable the previous film, there wasn’t any amount of fun.

When the film is trying to bring an ounce of emotion, it honestly doesn’t work. One moment in particular where we’re supposed to truly care about one dinosaur that’s being left on the island when it’s about to be covered by ash clouds. Didn’t feel like I needed to shed a tear there. The major dilemma that’s discussed throughout Fallen Kingdom is that should we be able to protect these dinosaurs from living, or should they be extinct again? The only time is when it injects some heart is when we see archived footage of Owen and Blue when she was a baby. 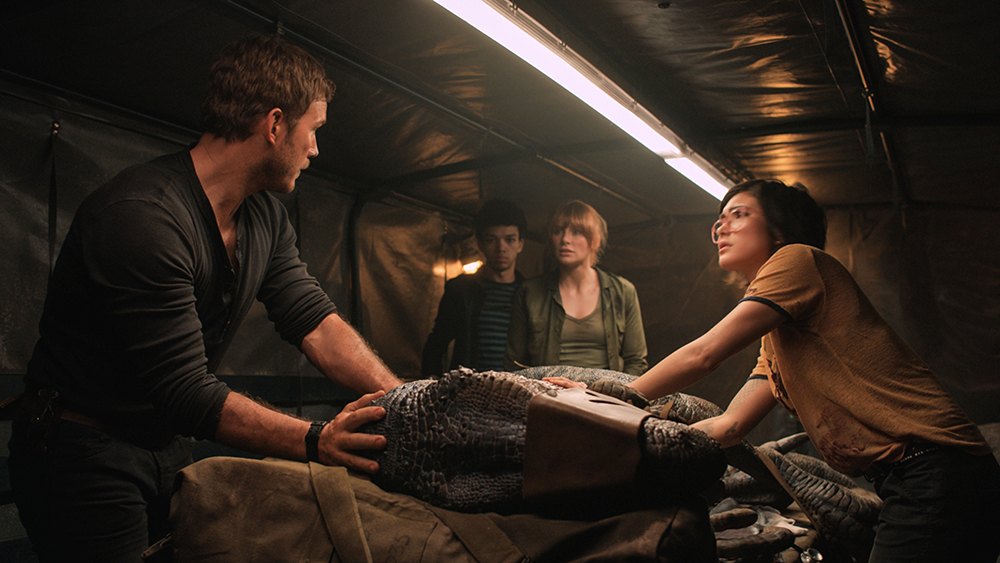 Visual effects wise for all the dinosaurs there are decent enough. But I still don’t know why they decided to still have an overabundance of CGI when they should’ve gone back to using a lot more animatronics.

One of the things that I thought was good in the first movie was the dynamic between Owen and Claire. Sure, the romance that might be going on might seem unlikely, but they did a good job at balancing the scale of the will they won’t they relationship. Some may think it’s improved here; for me, their chemistry is just gone and there weren’t any sparks this time around.

There are some new characters that are introduced into the saga with little reason as to why. Justice Smith (The Get Down) as Franklin was this annoying tech-wiz who’s afraid of everything. Most people will find him funny when he screams. Note to future screenwriters: Screams doesn’t equal comedy in action movies. And then you also have Daniella Pineda’s paleo-veterinarian Zia that should’ve had more to do. At a point, I honestly forgot they were still in the movie. But then you also have a couple wasted performances like Toby Jones and James Cromwell’s Benjamin Lockwood, who plays John Hammond’s former partner who funded this team to go to the island in the first place.

Why does creating another dinosaur seem to be the only solution to helping out the world? Didn’t these scientists even watch the events of the previous film with making a killer dinosaur and ruined the park? This time, they’ve created “The Indoraptor”. This results in a silly third act that made the movie worse by making it into a bad monster movie, especially when the trailer pretty much spoils certain moments (should’ve stayed away). After they left the island and going into the third act, it gets ridiculously silly. Near the end, a character makes a rash decision and it didn’t make sense why it needed to happen.

Jeff Goldblum does make a return as his iconic character, Dr. Ian Malcolm, speaking to the Senate, and the scenes he’s in from the trailers are the only scenes he’s in. The news about him being in here actually excited me, even though I figured he wasn’t gonna be in a whole lot of scenes. Wasted, I tell you. At least this was better than his return in Independence Day: Resurgence.

Fans who were let down by the first Jurassic World at most likely to feel like this is an improvement. I don’t. I know some fans enjoyed The Lost World, but I’m one of those people who doesn’t really like it because of the dumb moments that has. Truth be told, I would rather watch that again than Fallen Kingdom. What about the third film? No, nothing can make me sit through that trash.

As someone who loves Jurassic Park and even defends Jurassic World, this could’ve been a solid entry, but I was honestly heartbroken that I didn’t even think it was okay. And I really hate saying that because I wanted Jurassic World: Fallen Kingdom to be good. Plans for a third film was announced earlier this year, which I saw coming anyway, but it’s something I can’t be excited about unless it has better writers with it. The word to describe what comes next is curious. Life doesn’t find a way, unfortunately.

Jurassic World: Fallen Kingdom tried its hardest to be a serviceable sequel by fixing the problems of the previous, but it failed to capture anything really entertaining or noteworthy that makes this a disappointment for the series. Grade: D+