If the idea of a Pitch Perfect 3 sounded aca-believable, you shouldn’t really be surprised as this has become a popular franchise. This also brings the reality of me and Anna Kendrick singing a duet together every time I watch any of these movies. But is this truly the end for Bellas? Now with this being released now, can’t blame them.

The Bellas are having a hard time with post-college life with their jobs after graduating isn’t the best for any of them. However, they decided to go overseas for a USO tour going on one final trip together to be the opening act for DJ Khaled, playing himself.

The original Pitch Perfect still surprised me at how good it turned out to be. With 2015’s follow-up, it was disappointing, but I don’t hate it like everybody else as I still think it’s a rewatchable sequel, even if the jokes didn’t fall through. And if I had to be honest, I didn’t think this was going to be good because none of the trailers made me laugh, which made me worried. Also, there was that scene where they are jumping off an exploding boat. But since I did enjoy the previous films, maybe Pitch Perfect 3 would keep my expectations mild. Even if this was the end, it’s a performance that lacks anything new with me thinking halfway through, “Son of a pitch.”

The story isn’t really anything people will go for. It doesn’t stray anything too original as it’s kind of been done beforehand. The fact is that the group hasn’t performed with each other for a long time and they feel like it’s a good idea in the first place when their lives aren’t perfect after they graduated from college. The rundown of the Bellas includes Beca (Anna Kendrick), Fat Amy (Rebel Wilson), Aubrey (Anna Camp), Chloe (Brittany Snow), Emily (Hailee Steinfeld), Cynthia-Rose (Ester Dean), Lilly (Hana Mae Lee), Flo (Chrissie Fit), and Jessica and Ashley (Kelley Jakle, Shelley Regner). The problem in this is that it lost what made the first film stay ground. Even when it goes for those over-the-top moments, at least it was trying to be consistent with what it was going for. 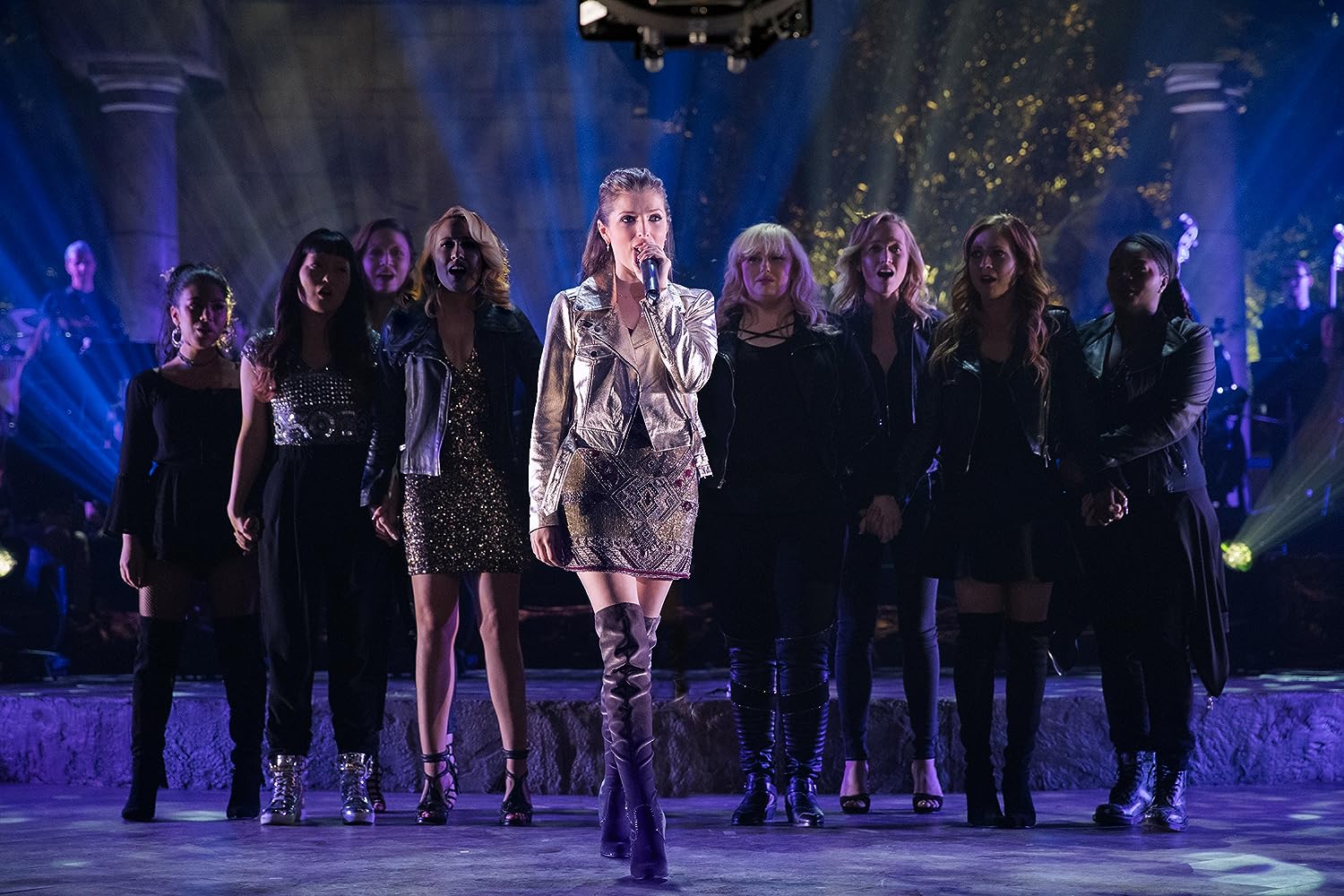 As always, the music does sound really good with these renditions of songs pretty much everyone knows with an acapella twist to it. With it being the selling point of all three films, it does end up being the best part about it. There is another riff-off here, and the fact they acknowledge that The Bellas never won a single riff is saying something.

Anna Kendrick is really the strongest performer in this and she’s at least trying, in my opinion. For some reason, I relate to Beca, not because I got her on a Buzzfeed quiz, but she’s the only one out of the Bellas that’s a little developed a little bit here. However, her character’s growth is a step-down since she quit her job as a music producer in the beginning. But we can all agree she is beyond beautiful in every scene she’s in.

There’s a side plot between Fat Amy and her estranged father (John Lithgow with a bad Australian accent) that took place quickly. They should’ve taken that story out of the movie because it felt completely useless and made it into an action comedy for four minutes. This is the second comedy sequel Lithgow is in that I didn’t like (the other is Daddy’s Home 2).

Director Trish Sie, known for directing the awesome OK Go music videos and the less credible Step Up All In, comes in following Elizabeth Banks directing the last film. She didn’t add anything new with this continuation, and if she did, it’s kind of eye-rolling with how a scene is played out. I mean, the way the musical numbers and choreography was shown was at least decent.

I even missed the presence of the Treblemakers because there’s no Skylar Astin, Ben Platt or Adam Devine anywhere. Their names were dropped in the beginning just in case we know where they’re at.

The laughs here are so little because the script just doesn’t have clever jokes that are meant to be funny. I only laughed two times throughout this, and one of them was predictable. Almost a lot of them didn’t land whenever it’s trying to deliver the comedy.

Any scenes with John Michael Higgins and Elizabeth Banks returning as commentators John Smith and Gail Abernathy, respectively, just wasn’t the same since their roles here are that they’re filming this documentary about The Bellas. Wait til the setup at the end because you just know how that concludes. Just wasted talents just like Ruby Rose’s performance as the lead of the rival band Ever Moist (the band’s name get one of the laughs from me).

This does have a touching conclusion to make it feel like a rap up for the series. Not nowhere near what High School Musical 3 did, but I’m giving that credit since it didn’t end quickly.

While this wasn’t a good comedy sequel, it just wasn’t locked on what it trying to focus on. Pitch Perfect 3 is the type of movie that can be shown in the background just because it’s probably has something to be liked. It seemed like all the girls had fun on set since I believe their chemistry is real for them, which should be given credit to. Is the last one as they promised? They said this is, but I’m not buying it as of now. Fans of the franchise will have fun with this no matter what anyone says. For me, this should’ve been a step forward to the end of this popular franchise.

Pitch Perfect 3 tried its hardest, but the third installment in this now-trilogy falls flat as it can’t retain the original’s lust.