Any announcement of a horror movie coming out will leave people thinking it will either be good or bad. Just like comedy, horror is a genre that’s pretty subjective to some. When A24 released a film under their name, you have to know the type of film you’re going to expect. It Comes at Night is the latest horror movie that might not be as scary as some may think while experiencing watching certain events unfold.

Secure within a desolate home as an unnatural threat terrorizes the world, the tenuous order a man (Joel Edgerton) has established with his wife and son is put to the ultimate test with the arrival of a desperate family seeking refuge. Despite the best intentions of both families, paranoia and mistrust boil over as the horrors outside creep ever-closer, awakening something hidden and monstrous within the man as he learns that the protection of his family comes at the cost of his soul. 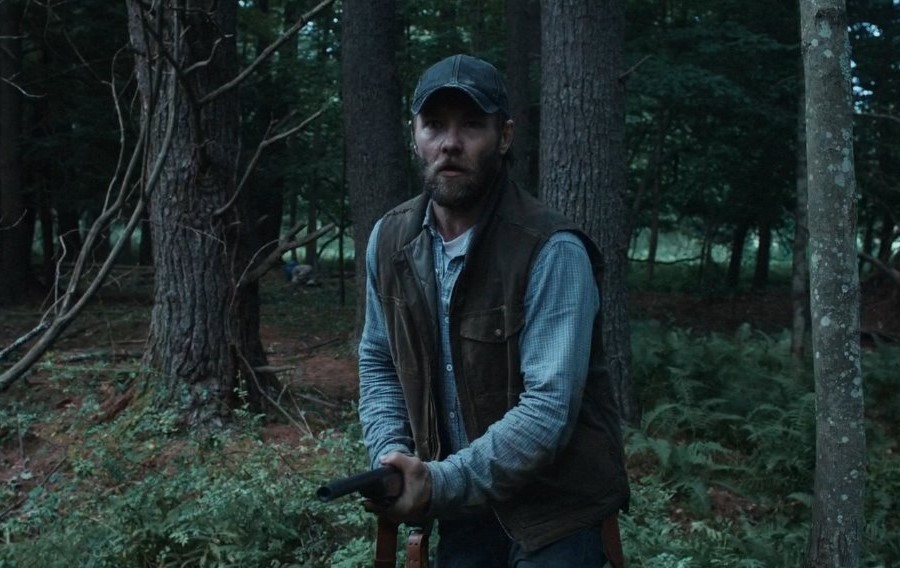 I’ve been tricked by the studio’s run of horror/thriller films as they don’t necessarily live up to expectations like The Witch or Green Room, in my opinion. Wasn’t exactly pumped about seeing this because I want to keep my expectations low than usual since I’ve been let down by these types of films. And I only watched the first trailer because I feel like it was gonna spoil something. But It Comes at Night treated itself into being a post-apocalyptic thriller rather than a straightforward horror movie. Does that please me? Surprisingly yes as this was investing in seeing everything come full circle.

Writer/director Trey Edward Shults perfectly knows how to go big on his second film after his debut last year Krisha. Really never heard of him before this came out, so I don’t know he can handle a small-budget horror film. His direction is beautiful and dark in the best way to describe it. He doesn’t stray away from making the film boring as it’s paced well. From a writing standpoint, the story is something that hasn’t been explored before. We’ve seen the story of someone protecting their family from anything evil. Think of it as a soft mixture of 10 Cloverfield Lane and The Road.

The cast is limited because of its short settings, but all of them were very convincing in their performances. From the way the characters are being handled in this situation, you clearly understand the causes of wanting to protect one another. As always, Edgerton turns in a brilliant role that leaves him in control as our guy that’s the main focus to protect the people to feel safe. Carmen Ejogo brought the best performance I’ve seen from her. Probably the biggest standouts in the entire film are Christopher Abbott as Will and Kelvin Harrison Jr. as Travis, Paul and Sarah’s son, respectively. Both are definitely names to look out for as their performances were absolutely thrilling.

The cinematography by Drew Daniels is marvelous with so many shots that are mesmerizing.

If there were any problems I had with it, the film doesn’t answer some questions that might lead to something that might be guessing.  After it’s over, it leaves you second guessing some scenes that don’t explain certain events. Maybe Shults wanted to do that on purpose so he can let us figure it out on our own turns.

But some people will be turned off very quickly as many are to think this is going to be scary throughout, and it wasn’t. Maybe because the marketing for it made it out be this monster flick and a crazy twist in the end. But no. With It Comes at Night, it’s a good thing for a filmmaker to make something different from some thought it would be. In the qualms of jump scares, there’s was really only a couple that actually happened and where pretty effective. But with films like this, this will be an example of something that will end of being divisive amongst people.

Following through the trepidations of dealing with survival, trust, and family, It Comes at Night balances it out as it turns out to be a thinking man’s horror film that’s unexpected in a lot of ways that made me actually like it. Great performances and intriguing story that doesn’t fall under the typical horror tropes, this might be one of the better horror films I’ve seen in quite a while.

It Comes at Night wasn’t the traditional horror film some may think as it felt different with a tense, dark storyline that’ kept me riveted until the end.