We rarely see a ton of actors telling their stories on the big screen. They just save it to be told in book form since that’s usually how most celebrities tell their life stories. That’s not the case for Shia LaBeouf since he wrote the screenplay for Honey Boy, and it’s you can see why he’s been known as a troubled actor now is displayed through a drama that can get a handle out of anybody who’ve been in his position. Showing his story in a raw film is enough to figure out that there shouldn’t be so much pressure when you’re younger.

What’s the Story: Otis Lort (Noah Jupe and Lucas Hedges) is a successful child actor working on a popular television show and has a not-so-good relationship that he shares with his former rodeo clown father James (LaBeouf) as they live in an apartment complex. When Otis is an adult, he enters rehab only to find out he has PTSD, which he doesn’t think is true, and it might be because of what he went through with his father in the past. 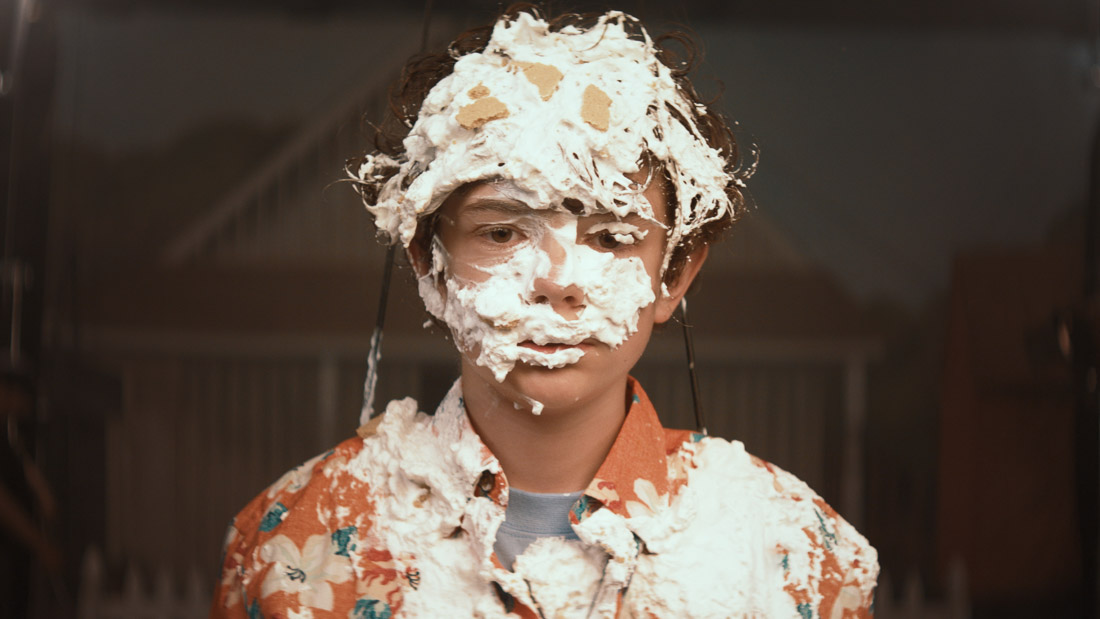 First hearing this project had me curious about how this will turn out, especially when there was some major buzz surrounding it after Sundance. An autobiographical story based on the controversial actor’s life sounded interesting while knowing what made him the way he is.  Alma Har’el is known for directing music videos or documentaries like Bombay Beach and LoveTrue, and this is her first major film to be working on. Some might feel like Honey Boy is like a kind of therapy section told in a full-length film, and it’s safe to say it’s excellent.

Honey Boy is graced by three great performances by Jupe, Hedges, and LaBeouf. Trust me, it doesn’t feel weird or complex in any way you look at it. Jupe has been impressing me over a couple of years with the roles he’s given, even just recently in Ford V Ferrari. He perfectly captures the essence of Otis and how a child actor is working in poor conditions in his home life. Get someone who’s able to show ranges of funny, sad, and anger without knowing it’s acting, and that’s a true star right there. Hedges is another actor of my age that hasn’t given a single bad performance in his career. Playing an early 20s version of Otis, he forced into rehab after crashing his car and getting into an altercation with the police. Just how he talks like him is a little uncanny if you asked me.

Then there’s the only and one LaBeouf playing his father that outshines those portraying himself. Normally, playing his own dad wouldn’t work out or plain challenging, but this is one fantastic role that he disappeared into it. Daring to say putting himself into this father’s shoes might be hard to get through, but there’s no sense of not buying it in any scene he’s in.

He’s been a successful child actor with Even Stevens (the best Disney Channel show I might add) and Holes. With his performance in this and the underrated The Peanut Butter Falcon from early this summer, LaBeouf is becoming a better man picking roles that shows that he might be maturing. He shares most of the screen time with Jupe more so than Hedges, and they worked so well together, even in moments of feeling angry at James. These are the roles I enjoy seeing him in instead of doing these huge blockbusters that he might not care about.

Knowing that LaBeouf wrote this all by himself, as a form of therapy while his stay in rehab, you can just sense the passion that he threw into this story he wanted to tell. All I can say that he penned a tremendous and honest script. Just know that this is told in a non-linear narrative, which was a good idea to show Otis as a kid and adult dealing with what’s going on with himself. Who knows if these things happened in real-life and he had to take some liberties, but with what he has gone through in the past few years, there’s no reason not to believe this broken relationship between a son and his dad. Does he love him? What does it mean to be a good father? I sometimes think it isn’t always perfect when parents are helping their children in the entertainment world, trying to do what’s best for them.

Most of the credit has to go to Har’el as a director who knows how to tackle this subject without manipulating the audience on how the story’s being told in its time frames. Who knows if another director like her can make it good as it already is. Besides that, Natasha Braier’s cinematography can’t be left out as the lightning of neon colors in the background outside are beautiful in its own way.

Although if there were some problems that the film holds against it, I thought it would be more of an emotional punch. There was one scene that made me tear up, but that was an aspect that was a bit of a letdown and probably why I didn’t full-on love it.

Any awards consideration to talk about? Getting into the Oscar race might be hard since there’s a lot of competition for Best Supporting Actor. I feel LaBeouf is a dark horse to get a nomination because he was that good. At least with the Independent Spirit Awards, it already earned four nominations. So they’re getting it right thus far this award season.

Honey Boy might not make it in my best list of the year, but there’s no denying it’s engaging and personal. It probably won’t be a surprise to say that this will not be for everybody out there, though this might be easy to consider a far tamer and better-acted version of Mommie Dearest. Har’el should get a lot more opportunities after this. Honestly, this is the kind of therapeutic drama that I didn’t think I needed, and yet it’s executed in the best way when it’s beautifully helmed by Har’el and provides three strong performances from its male leads.