Maybe it’s just me, but I never been that fond of getting excited about going to the circus. Sure, it’s there for entertainment with animals and talented acts. But it was never something I will remember from my childhood. The most famous circus everybody remembers was The Barnum & Bailey Circus. Some will definitely be in a world of imagination with The Greatest Showman as it might be the place music fans waited for.

Inspired by the imagination of P. T. Barnum, The Greatest Showman is an original musical that celebrates the birth of show business & tells of a visionary who rose from nothing to create a spectacle that became a worldwide sensation.

To get amped up about a musical is saying something. Why’s that? It feels like musicals are making a comeback in a new wave for people to actually enjoy. And my favorite movie last year, La La Land, was a musical that blew me away. The Greatest Showman looked surprisingly good since this was Hugh Jackman’s passion project and from all the trailers and the songs I heard before, it seems like it was going to show off that burst of excitement after walking out. Is this the greatest show? Sadly it isn’t.

By far, the greatest element that made this a musical watchable was the amazing, catchy music. All of the musical numbers had the flair to them without feeling too thematic. They immediately throw you into the opening number “The Greatest Show” 30 seconds in. The way the songs are performed and the chorology being filmed very much standout. My favorites were “A Million Dreams” and “This is Me”. It’s not surprising that the songs were written by songwriting duo Benj Pasek and Justin Paul, the Oscar-winning duo behind La La Land and Dear Evan Hansen. Honestly, the soundtrack is excellent and I can easily listen to it whenever.

Hugh Jackman is always a breath of fresh air whenever he’s in a musical, and in here, he’s terrific as P.T. Barnum. Proven his musical talents on screen with his Oscar-nominated performance in Les Miserables, he still amazes me with his singing.

The rest of the ensemble in here worked well. Hearing Zac Efron sing brings back the good old memories when he was in the High School Musical trilogy. He plays Phillip Carlyle, Barnum’s business partner, and it’s one of Efron’s better performances. There’s a romance that blossoms between him and Zendaya’s trapeze artist, Anne, who falls for him and become the subject of a mixed relationship. Michelle Williams never gives a bad performance that I know of as Barnum’s wife Charity.

My main problem is the overall film is that the story falls short of not providing a lot of information. Some moments felt really rushed without any real development from any aspect of the characters with no real conflict and making this a paint-by-numbers storyline. Because of that, they didn’t depict Barnum’s past with the allegations of animal abuse, which some knew about and refused to see this movie because of that. They were trying to make this a family-friendly musical, but it should’ve been at least darker going deep in those facts.

And there was never a moment that crossed that emotional status of making me feel tear up or anything. Even it wrapped up very quickly without a clear sign of what the message it was wanting to interrupt.

This was directed by first time director Michael Gracey, who worked for visual effects on a few projects, and you can kind of see this is a first big thing he’s doing. He was trying to go for a more toned- down Moulin Rouge!, and it wasn’t quite up to that level when he’s working from a script by Jenny Bicks (Sex and the City) and Bill Condon (Chicago, Dreamgirls), and it isn’t historically accurate about Barnum’s business, but instead went for a razzle-dazzle fun time. 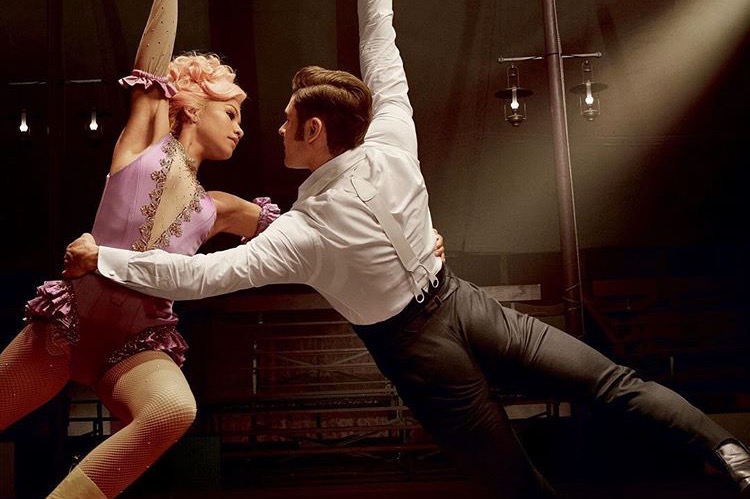 In the end, The Greatest Showman wasn’t the musical it could’ve been as it left me divided in whether I can enjoy this or not. I was never bored with this. If this was originally a Broadway show, that’s different from the 1980 Barnum musical, that might give me a lot of interest. Maybe if the movie was longer, rather than 104 minutes, it would probably improve it by a mile. This already got three Golden Globe nominations and it probably will get nominated for Best Original Song for “This is Me.” But it’s one of those musicals that can be re-watched just for the pure enjoyment of the musical numbers if you can get past the problems with the overall plot. Even when it’s on TV, it’s worth a casual watch.
The Greatest Showman didn’t pull through because of its rushed story, but its amazing music and solid performances added some energy into this musical.